It’s been quite a ride, but the much-hyped PlayStation Phone is finally a reality. Granted, Sony Ericsson hasn’t been as bold as to actually refer to it as such, but it matters little.

As soon as those dedicated gaming controls slide into view and the familiar Triangle, Square, Circle and Cross symbols make an appearance, you know instinctively which cloth this handset is cut from.

The effect is made all the more striking by the fact that when it’s in its ‘closed’ form, the Xperia Play gives practically no hint of its gaming pedigree.

The front of the device is very similar to Sony Ericsson’s other Xperia-branded smartphones, and the back is an awkward fusion of glossy black and metallic plastic accents.

Only the unusual L and R triggers give any indication that this is something that you can game on as well as make phone calls with. 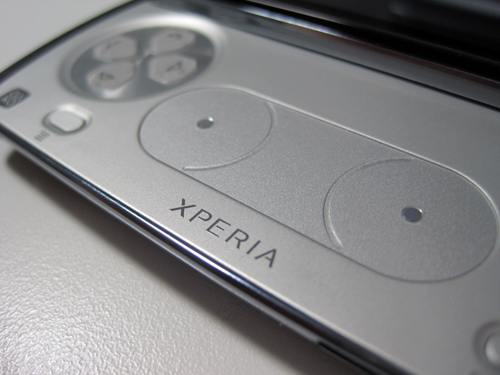 Indeed, the Xperia Play’s physical presence is curiously restrained, and it’s fair to say that it lacks the kind of sophistication we’ve come to expect from top-range mobiles.

From the creaking, flimsy battery cover to the disappointingly spongy quartet of Android menu buttons on the front of the phone, the Xperia Play feels like a bundle of compromises.

With a thickness of 16mm and an overall weight of 175g, it’s also one hell of a porker. That girth is clearly a result of the sliding mechanism, but we’d argue that it could have been a tad more svelte.

The 4-inch LED screen is also something of a disappointment, looking decidedly washed-out when compared to the Super AMOLED variant showcased by the Google Nexus S. It’s also extremely dim, even on full brightness.

Elsewhere, the lack of 720p video recording is crushingly disappointing, especially when you consider that it’s practically a standard feature on cutting-edge smartphones these days.

One could half-heartedly hypothesise that corners have been cut in order to make the phone’s gaming controls absolutely spot on. If that rather unlikely scenario is actually the case, then it's mission accomplished, and this fact alone transforms the Xperia Play from smartphone also-ran to mobile gaming giant. 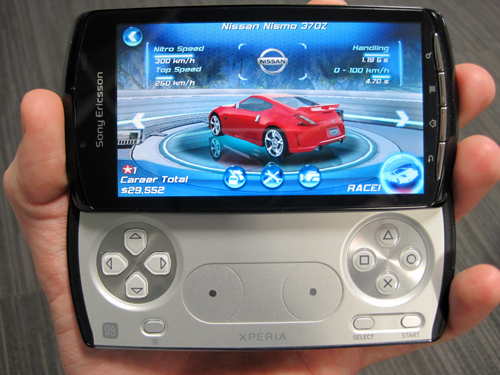 Gaming on the go

Gaming controls on mobile phones aren’t exactly a new invention, with Nokia’s ill-fated N-Gage offering such a revelation almost a decade ago, with little notable success.

There’s also the small matter of the iPhone spearheading a button-less gaming revolution, and many modern mobile gamers are arguably more comfortable with touchscreen interfaces than they are with physical controls.

Ironically, it’s this recent move towards touchscreen entertainment that allows the Xperia Play to make such a striking impact.

The first moment you caress those buttons is almost earth-shattering, despite the fact that it’s something you’ve been doing on portable and home consoles for the past few decades. 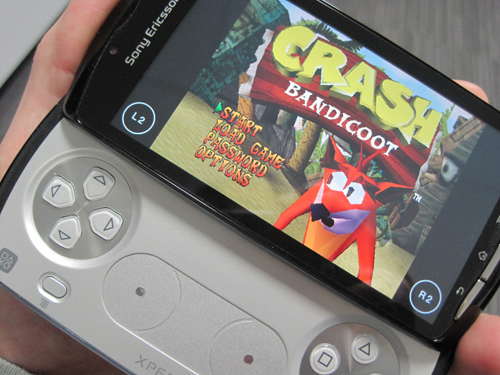 Touchscreen gaming is undeniably in vogue at present, but unless a game is built around such an interface – such as Angry Birds or Fruit Ninja – then the player usually ends up cursing at his lack of influence over proceedings.

The Xperia Play removes that irksome feeling, giving you a level of control that has literally never been seen on a mobile phone. The design is heavily indebted to the PSPgo, and despite the low profile of the D-pad and fascia buttons, they afford a gloriously precise degree of control.

The unique touch-sensitive pads replicate the DualShock analogue sticks of the now iconic PlayStation controller, and although they initially feel loose and imprecise, once your thumb learns to identify the tiny indentation in the middle of each pad they become a joy to use.

The L and R triggers are the weak link in the chain, being awkwardly placed and slightly flimsy. Hitting them with any semblance of accuracy is difficult, and their vulnerable and exposed position on the side of the phone makes us wonder just how long they’re going to remain intact. 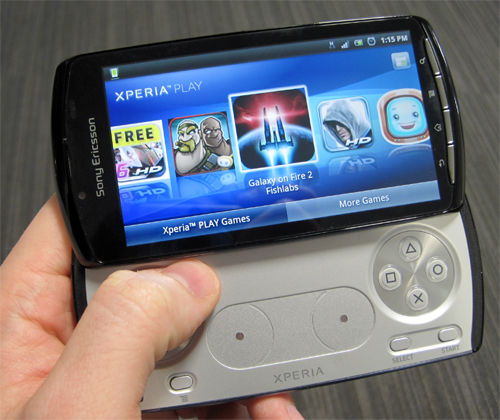 Of course, having these controls means nothing if the phone in question is a turkey when it comes to entertainment software. This topic has resulted in the Xperia Play catching some rather unfair flak over the past few weeks, with many so-called experts bashing Sony Ericsson’s piecemeal strategy when it comes to getting exclusive titles onto the phone.

While it’s true that the launch selection of games is rather underwhelming, the raw numbers are worth recounting. 60 Xperia Play-compatible games are now available on the Android Market (and on Gameloft’s online storefront), and you can expect that number to rise exponentially as the year progresses.

Many games are existing Android offerings that have simply been re-tooled to make use of the Xperia Play’s unique controls, and while it’s easy to grumble about re-cycling of old product, a curial point is being missed here: games such as Gameloft’s Asphalt 6: Adrenaline and the adorably cute 2.5D platformer Cordy are sheer bliss to play with proper physical controls, and the same goes for practically every other title that supports the Xperia Play’s interface. 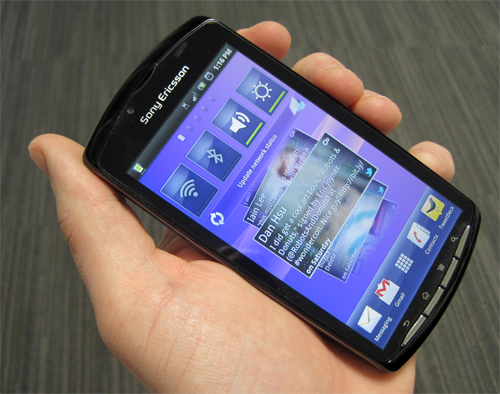 But Android games are just one element of the Xperia Play’s appeal: the all-important ‘PlayStation Certified’ accolade means the phone is host to authentic versions of classic 32-bit titles such as Crash Bandicoot, Jumping Flash and Syphon Filter.

Bizarrely, these retro gems are hidden away in a separate application rather than being lumped in with the Xperia Play-compatible Android games. Sony Ericsson is obviously keen to keep them separate, but it’s a poor choice that only serves to fragment the user experience.

As good as the emulation of the legendary 32-bit hardware is, it’s questionable that some of these titles are worthy of their £3.99 price tag – especially when you consider that games like Cool Boarders 2 are categorically outmatched (both visually and in terms of gameplay) by much cheaper games on the Android Market.

Still, it’s early days yet. Once triple-A games like Final Fantasy VII, Tekken 3 and Gran Turismo become available, this element of the Xperia Play’s functionality is likely to become a lot more desirable. 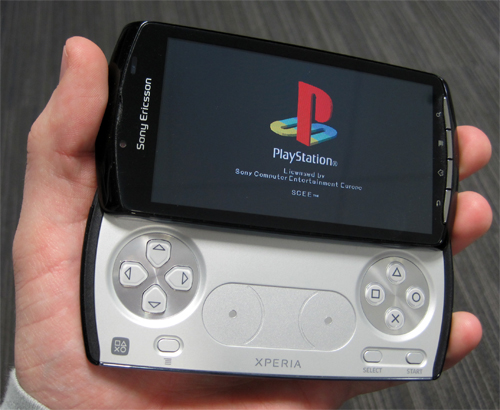 Playing Gameloft titles and old PlayStation classics isn’t the end of the Xperia Play’s usefulness. A whole host of retro emulators are available on the Android Market which effectively transform the phone into a time capsule of gaming history: SNES, Amiga, Mega Drive, N64, Spectrum and Game Boy Advance emulation is already possible, as well as many other notable machines.

Here the D-pad and buttons really come into their own, offering perfect accuracy and responsiveness for games such as Super Mario World, Speedball II, Sonic the Hedgehog, Jet Set Willy and Super Mario 64.

There are legal concerns to address here, naturally – these emulators require you to download ROM versions of each game, a process that stands on decidedly shaky moral ground.

Sony has recently taken steps to eradicate the problem by (allegedly) encouraging Google to remove the excellent PlayStation emulator PSX4Droid, although thanks to the open nature of the platform it’s very easy to track down a copy of the app online and side-load it using an easily obtainable file manager. 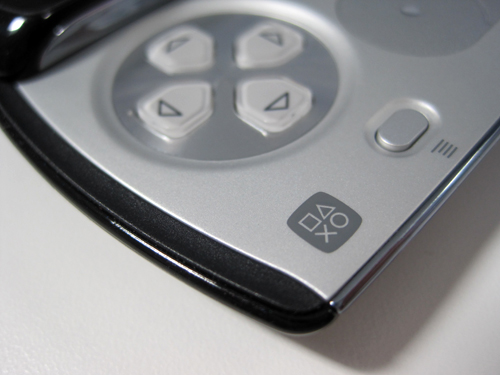 For the first time, retro gaming on a mobile is a genuinely authentic experience. Instead of forcing you to fumble around with QWERTY keyboards or virtual D-pads, the Xperia Play grants the perfect interface, and unlike the Pandora and GP2X Wiz this is a device that's going to be at your side at all times, always ready for some impromptu interactive entertainment.

We’ve spent so long singing the praises of the Xperia Play’s gaming credentials we’ve left little room for anything else, but here’s what you need to know: the phone runs Gingerbread - the latest version of Android - albeit skinned with Sony Ericsson’s propriety user interface.

Former Xperia users will be pleased to learn that the irksome TimeScape functionality has been reduced to a widget which can be binned entirely if you so choose. Aside from cosmetic differences (including a neat ‘wobble’ effect on home screen icons when you move them) this is a pretty pure version of Android 2.3.

With its curious mixture of underwhelming smartphone tech and killer gaming talent, the Xperia Play is a harder device to sell than Sony Ericsson’s hype machine would have you believe. Non-gamers are likely to view the slide-out controls as an unnecessary inconvenience, adding mass to the device which makes it heavy and bulky in the pocket.

However, lifelong players will be positively enraptured with the PlayStation-style interface, and if Sony Ericsson can canvass support from developers – as well as ensure that its store of classic 32-bit titles continues to grow at a healthy rate – then the Xperia Play could be set for a long and prosperous future.

As a phone, the Xperia Play is merely workmanlike, but as a phone that plays games, it’s stunning. It combines a touchscreen with a brilliant dedicated gaming interface to offer the best of both worlds, and while there is certainly room for improvement, it comes highly recommended to portable players
Next Up :
Pawnbarian review - "A minimalist roguelike that's hard to put down'"