When HTC unveiled the HTC One, it was hard to think of anything to say but 'wow'.

No matter the troubles HTC has experienced over the past year, the Taiwanese firm has come up trumps this time.

It's designed a robust and alluring phone that is sure to win plenty of awards and admirers in the coming months. 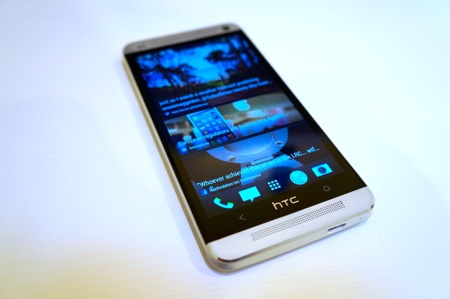 These days, a new phone isn't just judged by its processor or operating system. We've arguably reached a technological plateau in the smartphone industry, so it's up to manufacturers to 'magic' up some killer software features to set one model apart from the rest.

Saying that, HTC has, however, still opted to equip the HTC One with the best processor available at the time, an upgrade of Qualcomm's S4 Pro quad-core chipset. This newer Snapdragon 600 CPU is paired with faster RAM, but the same Adreno 320 GPU.

So, if you want to brag about owning the fastest smartphone on the planet, HTC is the current leader. Won't last long, though.

Also, compared to the Sony Xperia Z - with its glass front and back - or Samsung's predominantly plastic Galaxy S4, the HTC One ought to be the toughest of all the new wave of high-end smartphones, thanks to that aluminium unibody shell. 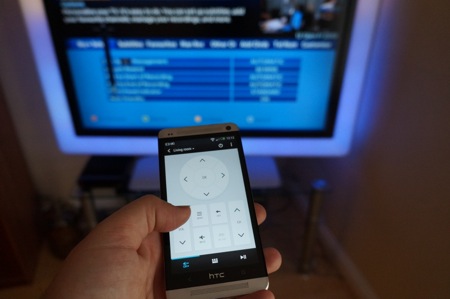 One other major differentiating feature that could give the HTC One an edge over the competition is an infrared port. Through some clever infrared technology, you can control a range of televisions, Blu-ray players, set-top boxes, and more.

HTC's own TV app shows what's on and up next on TV, serving as an alternative to those special apps you can download for managing individual Smart TVs via wi-fi. 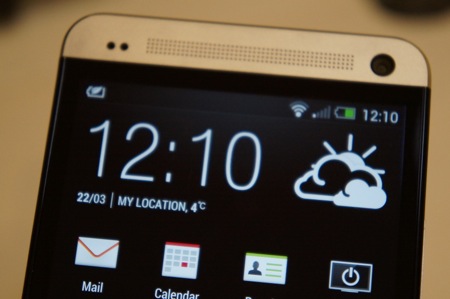 With the HTC One comes HTC Sense 5.0, which you'll either love or hate based on how much of the native Android 'look and feel' you like.

Whatever you think about this additional 'skin', HTC HAS taken advantage of the One's high-contrast 4.7-inch 1080p LCD display to make menus sparkle and stand out.

Previous versions of HTC Sense were too cartoony for my liking. Everything has been toned down somewhat now, though, allowing your wallpapers, pictures, and video to almost sell the screen by themselves. 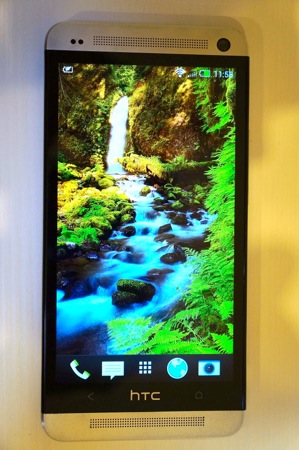 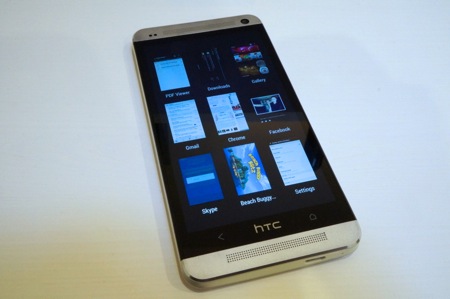 Although there's no recent apps key, a double-tap of the home button reveals the last nine used apps

The home screen still contains the usual array of widgets and shortcuts, but it's now accompanied by the new BlinkFeed aggregator page.

Besides a highly unique camera - which I'll come on to shortly - the final HTC One feature worth noting is the pair of front-facing stereo speakers. These are likely to set the benchmark for phone audio for some time to come. 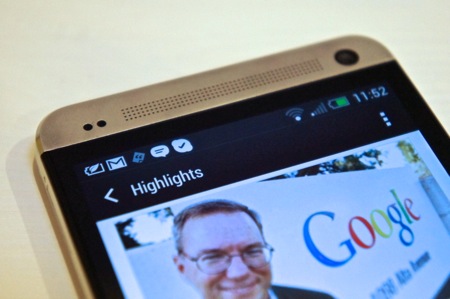 BlinkFeed: Presenting the latest news, Tweets, Facebook updates, videos, and much more - all easily customised for you Camera

HTC is taking a brave gamble by no longer participating in the long-running cameraphone megapixel race. Instead, it's turned its attention and focus to an advanced imaging technology it calls the "UltraPixel Camera".

The HTC One's snapper may only, therefore, shoot 4-megapixel images, but it can capture a lot more light than cameraphones with higher megapixel counts. As a result, the HTC One's UltraPixel Camera should produce better all-round photographs.

In reality, it definitely does excel in low-light conditions and is almost a match for Nokia's cameraphone standard-bearer, the Lumia 920, in dimly lit rooms. However, when conditions are good, you simply can't capture the same amount of detail with a 4-megapixel camera as you can with an 8-, 12-, or 13-megapixel camera.

HTC has also developed a new "Zoe" shooting mode, which enables you to capture multiple shots along with a short video clip. HTC has also included some clever tools like object removal to get rid of someone or something in the way of the shot. 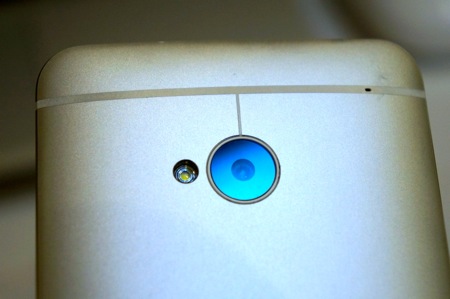 As mentioned earlier, the HTC One sports some incredibly loud built-in stereo speakers. These prove an obvious benefit to mobile gamers of all kinds.

These direct-facing speakers add loads of depth to every game, you see. Well, assuming the developer spends as much time on the game's audio as its visuals. 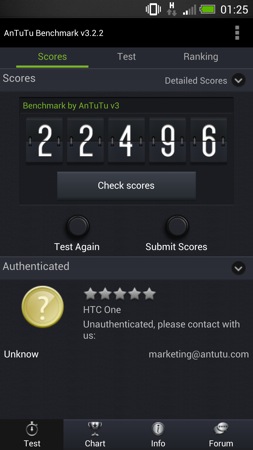 As far as benchmarking goes, the HTC One outperforms the Xperia Z, with the former's faster RAM resulting in quicker load times for games.

Plus, you can easily hook the HTC One up to a TV via the MHL output or use HTC's optional wireless link accessory.

HTC is also one of the few non-Sony manufacturers to make its smartphones PlayStation Certified. This means you have access to classic PlayStation games on your HTC One, although there's no word yet about a release date for the forthcoming app that will let you use your DualShock 3 controller with the HTC One. 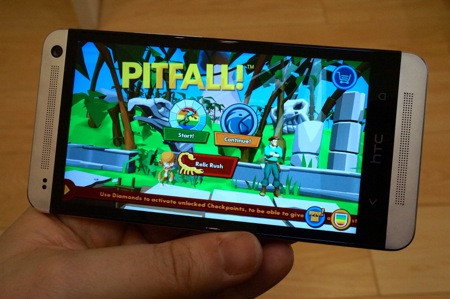 HTC has included a power saving mode here that can cut down CPU performance and turn down the brightness to conserve power and ensure the One's 2,300mAh battery lasts a whole day.

It does manage things well when enabled, but this does mean compromising on display quality and cutting the performance of the processor. Not that you should notice this in normal day-to-day use.

All too often, it's easy to forget that a smartphone is also designed to make calls, and the HTC One does a good job of holding on to a signal.

There are a range of options to enhance the wi-fi signal, while the phone supports LTE (4G) and DC-HSPA (as used by Three and other networks soon). 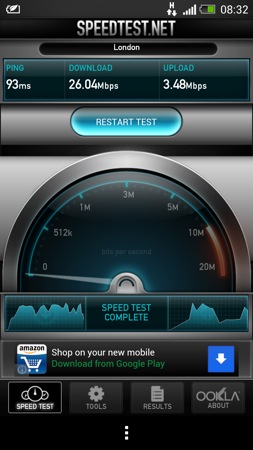 We couldn't test 4G, but if this is indicative of what you can get on 3G (via Three), then this phone is the fastest we've ever tested The Bad

The lack of a memory card slot is a rather major problem. While you can purchase a Google Nexus 4 for under £300 and can therefore accept this storage limitation, the HTC One is a premium device.

It won't take you long to fill up its 32GB of internal storage (far less when you consider the space taken up by the OS and system apps), especially when you consider all those full-HD videos, Zoe clips, and humongous games.

Another issue that became apparent after a couple of weeks of usage was dirt. After using the phone out and about for a number of days, it managed to accumulate quite a bit of dirt along the edges of the phone. It was quite easy to wash off, but it did raise some concerns about how the phone might look in 18 or 24 months' time. 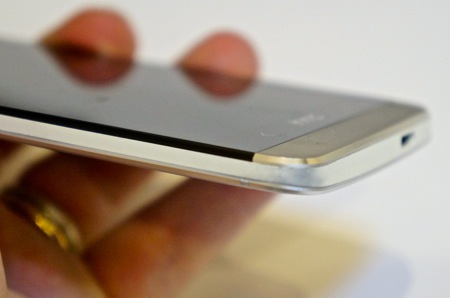 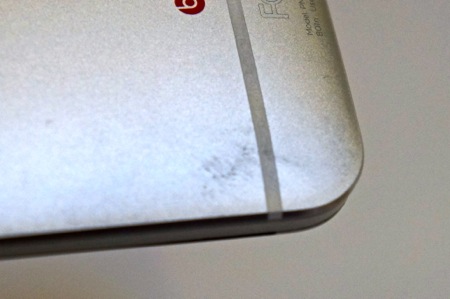 Down and dirty: The HTC One does a great job of removing all dirt from your fingers like your computer keyboard!

The final problem pertains to the volume of those dual speakers. They're too loud even on the lowest level, and this might force you to switch to headphones or turn the sound off completely on occasions when you want to use the phone without disturbing others.

The HTC One is an amazing device. And if HTC can put the marketing money where its manufacturing mouth is, it might actually get the success it deserves.

The HTC One isn't perfect, however: the absence of a card slot grates. That's an oversight that gives both Sony and Samsung a clear advantage in the storage department.

What is clear, though, is that if you can live without a card slot and want a phone that really stands out from the crowd, HTC has come up with a real winner.

Could this be the year that HTC gets back on its feet? Well, with devices like this, it stands an excellent chance. 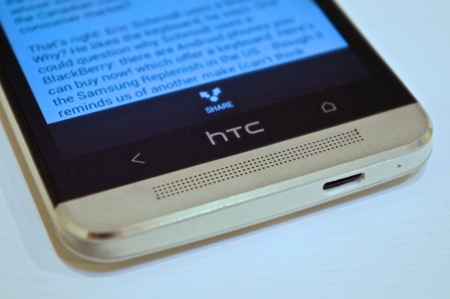 The HTC One is an incredibly powerful device, has market-leading speakers, and an eye-catching high-res display. If you can cope without a card slot, this should feature right at the top of your Most Wanted Android smartphone list
Next Up :
DC Worlds Collide review - "DC fan service in an enjoyable gacha package"