Forager was an incredible game when it launched on PC last year, earning universal praise from both critics and consumers. Its mobile port to Android continues that high-perfoming tradition, although a bit of the magic is lost during the move to a smaller screen. Forager gets off to a strong start – thanks to its beautiful graphics and roster of unlockable skills – but as things become more complex, the limitations of a small screen quickly become apparent.

Don't get me wrong, Forager is still an incredible game on Android devices. If you missed out on this gem during its original release, and you can only play it on Android, I'd highly recommend picking it up. All the content from the PC version was faithfully translated this pint-sized edition – you'll be chopping down trees, mining rocks, and slowly unlocking a staggering list of skills, creatures, building, and crafting material. At it's core, Forage is a survival-idle game, but one that's so compelling you'll never really want to put it down and let the game do its thing.

All this content can be a bit overwhelming at first. Every time you level up, you're given the chance to unlock a new skill. Your skill tree is pretty limited at the beginning of the game – with only four options to choose from. However, each time you unlock one skill, several more become available. By the time you hit level 5, the number of ways in which you can progress your character is shocking, and you'll probably start worrying about which choices are best.

Thankfully, Forager does a great job of slightly nudging you in the right direction. Granted, this is a game that's meant to be very free-form, and it's not often that it'll hold your hand. However, as you move through the levels, you'll notice that craftable items will often require other items that can only be unlocked in the skills menu. By paying attention to which gear you can craft – and which are locked behind unavailable items – it's pretty easy to figure out how the game wants you to play it.

That being said, you always have the option to say "no thanks," and go your own way.

Forager would be perfect on mobile devices if it weren't for the complete lack of customization options when it comes to on-screen controls. The settings screen is filled with choices, but they almost all relate to graphic preferences such as camera panning, floating animations, and item notifications. The touchscreen controls are serviceable, but during some of the more hectic combat sections they're more likely to get in your way than provide you with the upper hand. After trying to get the hang of touch controls for about a half hour – and failing miserably – I decided to hook up my Razer Raiju, and the game was immediately more enjoyable. 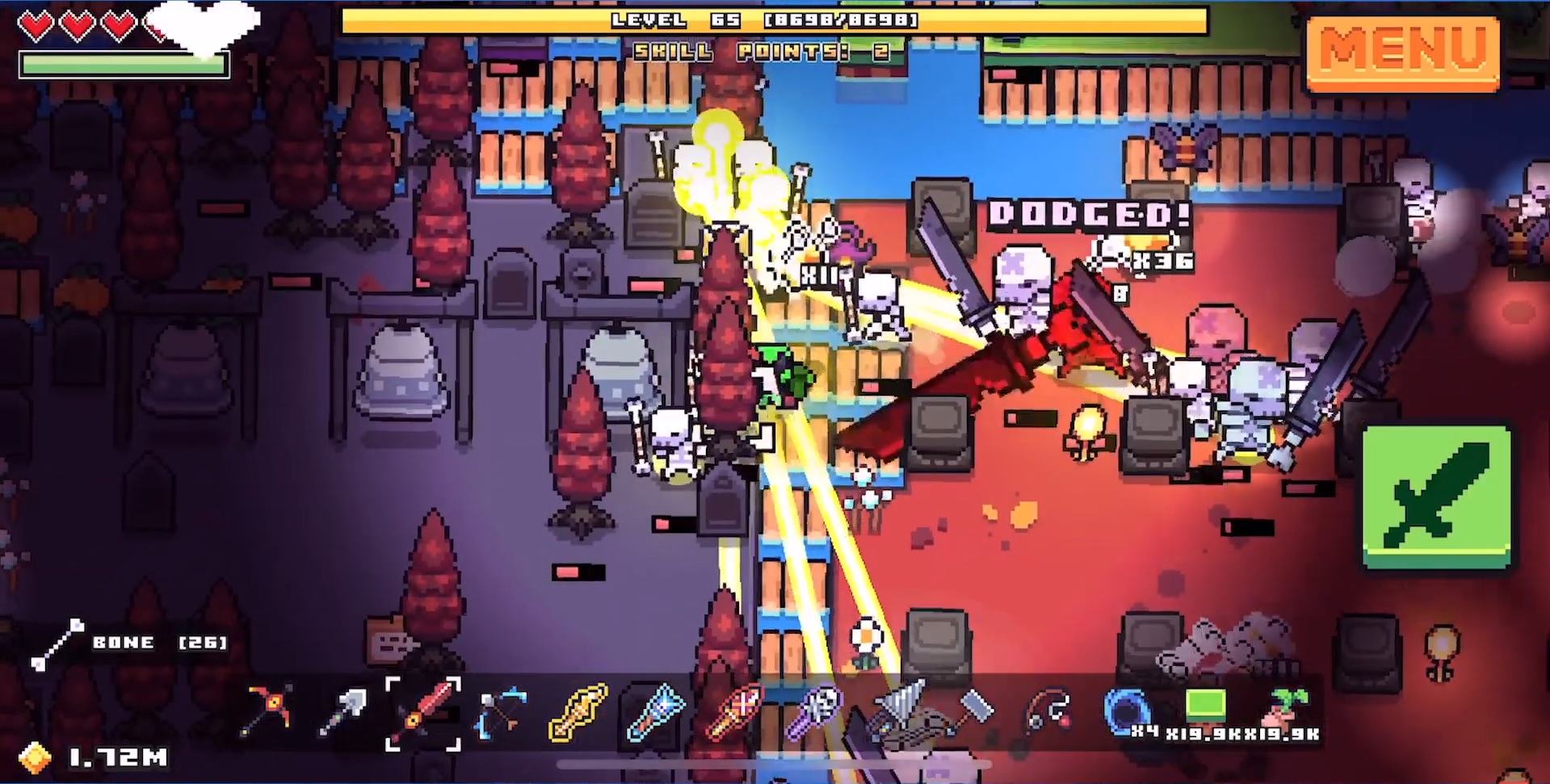 Outside of the touchscreen complaint, there's really nothing inferior about this version of Forager compared to any other platform. Every so often the targeting system will become a bit finicky – highlighting objects you didn't intend – but it's nothing that spoils the experience or causes any long-term frustration. In fact, I'd argue that a mobile platform is the best way to play Forager, so long as you have a controller you can use. The game is just as fun played in short, 15-minutes bursts as it is for marathon gaming sessions – an aspect that the mobile format is well-suited towards.

Simply put, Forager is an incredible game – if you're playing with a controller. Those without one will be left mucking about with touch controls that are completely uncustomizable and leave a lot to be desired. If the mobile format is the only way in which you can experience the tree-chopping fun, it still comes highly recommended. The game might become much more challenging later on if you're stuck with on-screen controls, but there's a lot of fun to be had with this classic survival game.

Forager suffers from awkward – and uncustomizable – touchscreen controls, but the core gameplay remains intact on Android. From a massive skill tree to the adorable graphics, Humble Bundle's iconic survival game is just as fun as it was in 2019. A controller is by far the best way to tackle this mobile port, but there's still a lot of fun to be had even if you need to make do with the virtual gamepad.
Next Up :
REDMAGIC 8 Pro review - "A beast in performance, but not without growing pains"