Players are cast as the Doom Slayer, a space marine who is the scourge of the demon horde, tasked with murdering the devilish creations both in a research facility on Mars and in Hell itself.

The run and gun, rip and tear gameplay from the original release returns. Combat is fast with players alternating between using firearms to deal damage before going up close and personal to finish the fight with the title's signature - and exceptionally bloody - glory kills.

New weapons and enemies are introduced at a pretty steady pace, meaning that there is pretty much always something new to shoot or kill. And the story takes you through a variety of locations that are either industrial facilities or literal hellscapes.

But, you could have read the above in any previous review of Doom. The real question is how this game plays on Switch.

Nintendo's hardware is clearly less powerful than PlayStation 4, Xbox One and PC, so compromises have had to be made. Fortunately, these have - by and large - been made where it counts. 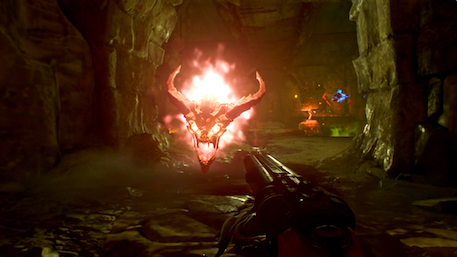 The game doesn't look nearly as nice as it does on other platforms, with surface textures generally looking flatter and lacking detail. The game outputs at a 720p resolution - docked or undocked.

The trade-off here is that Doom runs at a pretty smooth and constant click of 30fps, which plays into the title's strength - its fast-paced combat. We didn't notice any slow-down either in docked or handheld mode. 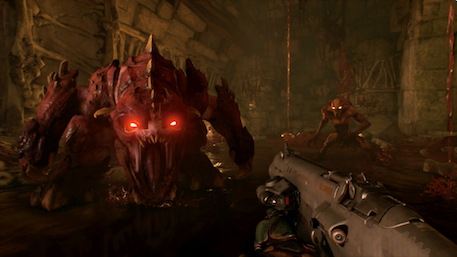 Controls are something of an issue, however. The Switch's analogue sticks aren't as responsive as other gamepads, meaning that aiming is sometimes a bit of a chore, especially given how fast combat is.

While this isn't exactly a precision shooter, I did find myself missing hellish creations a fair bit due to the controls. Or maybe I'm just terrible at games, who knows?

Oh, and if you are going to buy this - buy the physical version, unless you already have a pretty sizeable memory card. The game comes in at a 13GB download, with a further 8GB for multiplayer.

This port of Doom is definitely one you should pick up if you want a good first-person shooter to enjoy on the go. It fills a gap in the Switch's line-up and is an absolute blast to play.

But don't go in expecting the technical fidelity that Doom shows on other platforms. This is a really good port, but far from a definitive edition of the bloody shooter.

Bethesda has squashed its 2016 shooter onto Switch, and while it's missing some polish, it's still a lot of fun
Next Up :
Roller Drama review: "Scheme with your team, skate great"