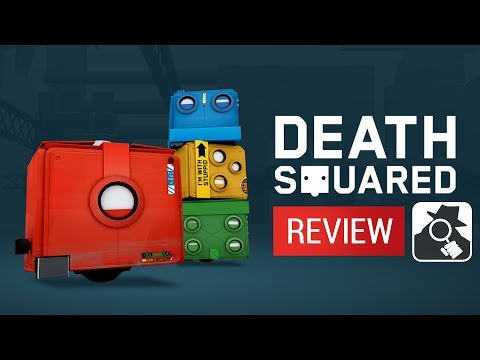 Subscribe to Pocket Gamer on
What is it to puzzle? What is it to strive for solutions where others would simply lay down on the floor and cry? Why are we so enamoured with figuring out where on earth some cubes are supposed to go?

It's an interesting question, and Death Squared's answer to it is a pretty simple one - we do it because it's fun. Because figuring out the answer to any question just feels, well, good.

Especially when it's all wrapped up in a package with as much polish and heart as it is here. Throw in the fact you can play with a friend on the same device, and you're pretty close to puzzling heaven.

The game sees you lading two cubes through a series of testing chambers. You've got two joysticks do do the job with. One moves the red cube, the other moves the blue cube. So far, so simple.

But Death Squared plays by its own rules. There's no grid here to snap your movements to. It's more like a 3D platformer. You can fall off the edge of the level if you mess up.

You need to get both of the cubes on the correct coloured square to move on. After the first level though, that's much easier said than done. Much, much easier. 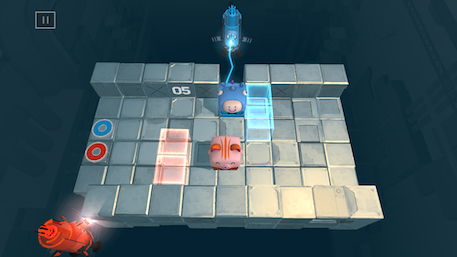 Soon other blocks are moving when yours do, flipping switches makes spikes burst from the floor, and simply getting from the two shapes from A to B becomes a head scratching challenge.

The squares you're trying to get to move, lasers try and shoot unprotected blocks, and all manner of things attempt to make sure you don't get to where you want to go. If you're playing with a friend, expect a lot of shouting.

There are shades of Portal here, but Death Squared throws in a whole bunch of its own ideas as well. It feels fresh, it feels exciting, and it feels like exactly the sort of step the puzzler genre needed to take.

This mobile version controls brilliantly, and while the lack of a safety net might take a while to get used to, once you do you'll be buzzing through the levels with a grin on your face.

When the App Store is dominated by games that are little more than iterations of other, successful titles, finding something like Death Squared is an absolute treat.

Why do we puzzle things out? Because we like to think we're smart. It makes us feel good. And Death Squared does that in spades.

Whether you're playing with a friend or on your own, Death Squared is a brilliant puzzler
Next Up :
Xiaomi 11T Pro review - "Pro in name, pro in nature"