Card Thief, the follow-up to Tiny Touch Tales' Card Crawl, is a strategy stealth game that plays a little like Solitaire.

Your job is to make it through the level, steal the chest, and get through the exit without getting caught. The riskier the chest's location, the more the chest is worth.

The big question is whether stealth can be mixed successfully with Solitaire. The easy answer is yes... yes it can.

Tip-toe through the window

It sounds like an easy concept, but in reality a round of Card Thief is pretty challenging. Starting off with 44 cards, not including yourself, every set is dealt out in a random manner.

If you want to be basic about it, you've got a bunch of card types including enemies, barrels, torches, chests, purses, doors, exits, and extra stealth - er - feet. 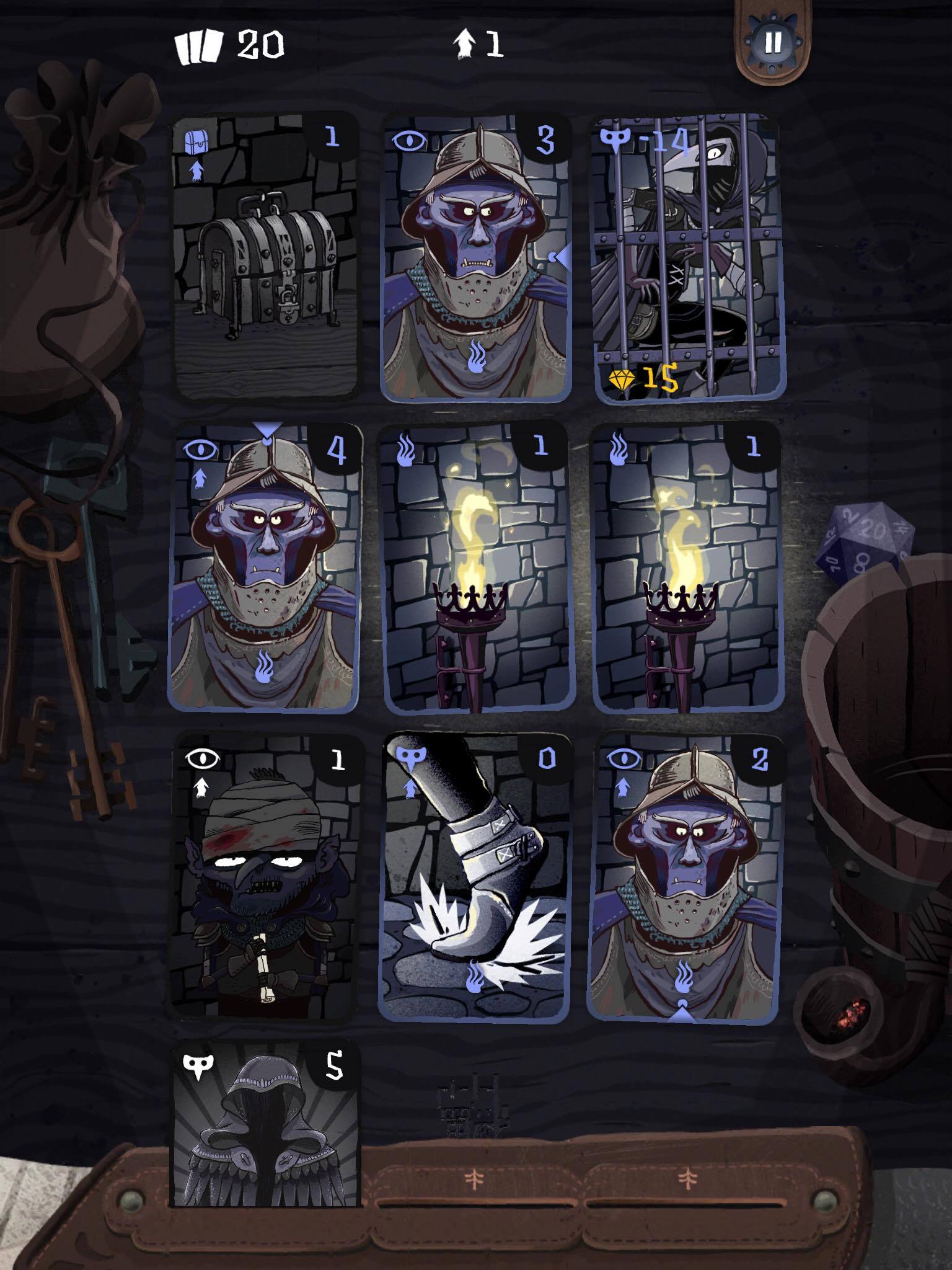 You start off with 10 stealth points and, much like the average CCG, each card on the board has a cost. This cost goes up and down depending on whether you've extinguished adjacent torches or not. That's where the strategy comes in.

Not only do you have to make sure you're not visible to the guards, but if you want to take them out, you'll have to have an adequate number of stealth points. Otherwise you either trade places or just get caught and jailed.

You have cards that can help you, however, like a one-time-use cloak, the barrel, or the sneaky feet card. Each of these can boost your stealth points if used correctly.

Once you've got your chest and hightailed it out of there, you can bust it open and collect whatever goodies are inside. In order to progress through the game, you've got to collect a number of different items to unlock extras and other heists.

By the window - that is where I'll be

Card Thief's aesthetic is really striking. Not only because it keeps true to Tiny Touch Tales' style, but also thanks to its minimal animations and accompanying sound effects.

It's also nice for there to be a real purpose to collecting the chests. Without the chests you can't progress in the game, so there you go. 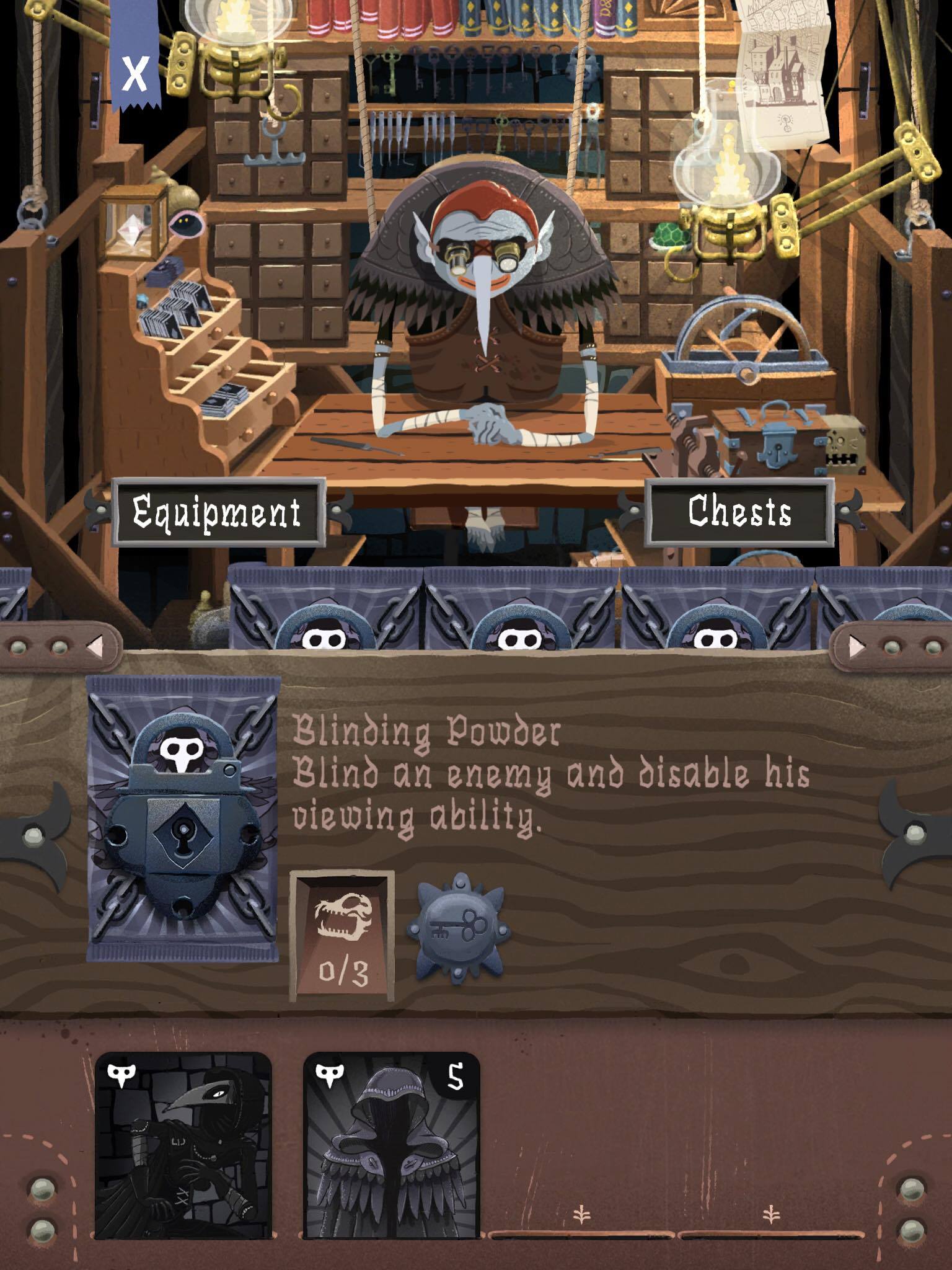 However, that doesn't mean it's a flawless experience. As you have to select two cards minimum to play your turn, if you're extremely unlucky you can find yourself cornered with no choice to but to restart the level.

Due to the randomisation of the draw, it also feels like some levels can be extremely easy to complete, while others are one unlucky set after another depending on what order they stack.

Tip-toe through the heist hall with me

Not everything in Card Thief can be solved by strategy alone. Sometimes it's just down to the luck of the draw, but that doesn't dampen the fun of it.

Looking past its occasional frustrations, it's a decent strategy card game where each step has to be carefully thought out. You can't just botch your way through this one, kids.

Card Thief has its heartbreaking moments, but beneath its occasional hiccups sits a fun card game which certainly satiates our hunger for strategy
Next Up :
Hindsight review - "Deeply emotional but a tad repetitive"