There's a slip of a story somewhere in Battleloot Adventure but your objective is essentially this: kill stuff.

It's a turn-based RPG that's light on the role-play and big on the battling. Over the course of the game's lengthy campaign you'll be facing off against a whole lot of foes.

With so much focus on combat, Battleloot Adventure would be in serious trouble if its fighting wasn't much cop. Thankfully, developer Digital Tales has delivered a thoroughly compulsive battle setup, managing to be refreshingly accessible while offering just enough strategic depth to keep each bite-sized skirmish engaging.

Get the party started

Before each encounter you're given the chance to optimise your band of adventurers - switching out classes, selecting your arsenal from an ever-growing stash of equipment, tinkering with skill trees, and even adjusting battlefield formations.

From there, it's straight into the fray: you deploy characters by selecting a target, with a rock-paper-scissors-style system giving each class distinct advantages and weaknesses against specific enemies.

Each unit has its own stamina gauge, too, which depletes every time you attempt to block an incoming attack or initiate a combo attack.

Combos let you summon secondary units into the throng, and these dish out additional damage and gather special attack-granting stars as long as you don't mind leaving yourself open to attack when it's the enemy's turn to strike.

Money (that's what I want)

Make it through a battle and you'll earn money to spend on new upgrades and - by meeting stage-specific criteria - more wonderful loot.

If there's any real complaint it's that the action is perhaps a little too simplistic to sustain interest over extended play. Once you're out of the tutorial stage, you've pretty much seen everything the battle system has to offer and the game's inherently repetitive nature inevitably grows a little wearying.

But there's no denying that Battleloot Adventure is a huge amount of fun in short sittings. It's beautiful to look at and offers a thoroughly compulsive array of opportunities if strategic tinkering and kleptomaniacal grinding are your bag. 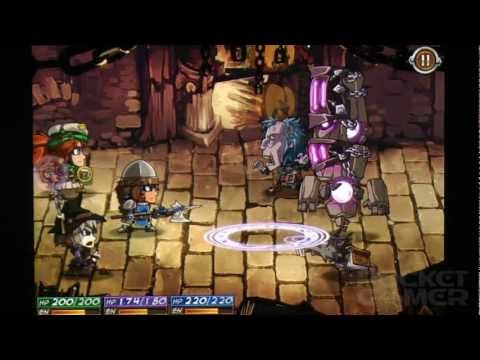 A generous, beautifully presented turn-based RPG that's tremendously entertaining in sensible doses
Next Up :
Tightrope Theatre review - "Failure is very much an option"

It's time to Battle, Loot, and Adventure