Ascension: Chronicle of the Godslayer

Over the years, iOS devices have become something of a hotbed for card and boardgames - especially those that are innately multiplayer by design.

The champions of European ‘gateway’ boardgaming have appeared - Carcassonne, Ticket to Ride, and Catan - while classic American designs like Monopoly and Scrabble have also made their presence felt on the App Store.

What we haven’t seen too much of the new breed. Ascension: Chronicle of the Godslayer is looking to rectify this.

Designed by Magic: The Gathering Pro Tour champions, Ascension is a deck-building game - but not in the same way as Wizards of the Coast’s magnum opus.

Instead of building your deck in-between fights, you do so during gameplay, starting off with ten cards and playing them onto the board in order to claim other cards to add to your deck (played out in sets of five from the ever-increasing pile).

These new cards can be taken from either a set of three constant piles (as it were) that offer up basic advantages over your starting deck (or claim a sneaky point from the limited pool), or they can be used to claim the random central cards, which can offer permanent boosts/deck adjustments, temporary effects, or monsters to destroy (to claim a fistful of points).

Whichever player (up to four can take part) manages to claim the most points when the scoring pool is empty is declared the winner.

Effectively, it plays out nothing like Magic: The Gathering, but that isn’t to say it lacks in either strategy or skill.

When playing against other humans it can be far too easy to over-balance your deck with too many of one type of card - building up power so you can smack down the bigger monsters only to find the central reservoir filled with costly mana cards, for instance. (Or vica versa).

The luck-based nature of the central row does occasionally rub the wrong way - especially with more than two players - thanks to the way the six cards can be completely different come your turn.

But, ultimately, the game is fast and tactical like the best card games, and the luck evens out in the long run thanks to some balanced character and creature design.

One feature it does share with Magic is the usa of interesting art to illustrate the cards. The images are worth stopping to admire.

However, it can be hard to identify cards quickly when they’re zoomed out, even after a good few games.

If you’re lacking any willing human players in your vicinity, Ascension offers up the ability to both play against bots (with two difficulty levels) or find matches online.

Sadly, both single-player and multiplayer drops the deck to some degree or other: the former merely consists of disconnected practice matches, while the latter offers up no persistent stats, leaderboards, or ELO rank to shoot for.

This doesn’t diminish the quality of the game itself, but unlike Magic - which was almost as much about the act of obtaining new cards as it was battling - there’s little to keep you playing beyond the matches themselves.

A few more options that take advantage of the digital format would have helped raise Ascension higher in the increasingly crowded boardgaming genre, but for a relative newcomer it punches well above its weight. 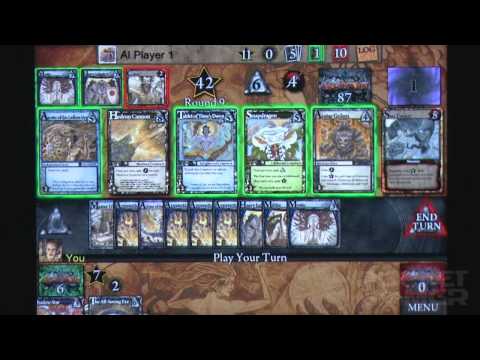 Ascension: Chronicle of the Godslayer

A clever and tactical game that just lacks the extra features to truly ascend to the top of the deck
Next Up :
Evony: The King's Return review