Of the big three games console manufacturers, only one is also in the business of making phones. But Sony's PlayStation and Xperia brands have only really come together once over the years.

No one expects an Xperia Play successor any time soon, nor a Vita 2 for that matter. But in recent years, Sony has quietly imbued its Android phones with decent gaming credentials.

Which brings us to the Sony Xperia 1 II, a lavishly specced - and expensive at £1,099 - new flagship phone. Just how much of Sony's gaming DNA has found its way into this handset? Let's find out.

It might seem as if Sony is trying too hard to be different with the Sony Xperia 1 II. But really, it's just being Sony.

Of course the company behind the PS5 would buck the smartphone trend for curvy edges and intrusive screen notches with a square, symmetrical design. The Xperia 1 II is tall, thin, and just the right combination of classy and utilitarian.

The Japanese tech giant makes high quality 4K TVs and has stakes in the movie making business, so of course it would equip its new flagship phone with a cinematic 21:9 4K OLED display and a 60Hz refresh rate. Rivals like the OnePlus 8 Pro are roughly half as sharp and twice as smooth. 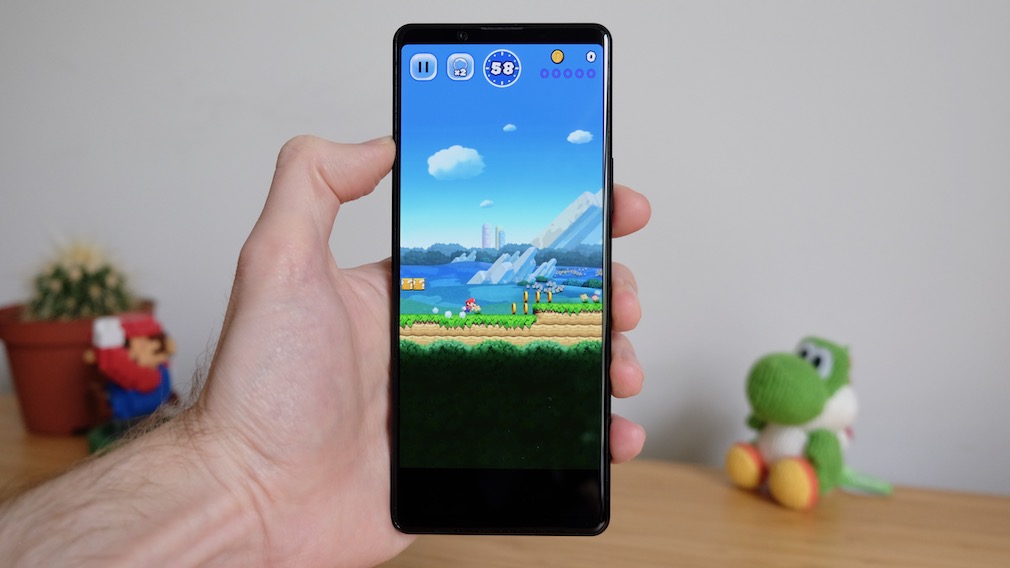 Sony makes high-end audio gear and is the second-biggest record company in the world, so of course it would feature a high-grade 3.5mm headphone jack when almost ever other flagship phone maker has ditched the standard. A pair of front-firing stereo speakers are also particularly gamer-friendly.

And the company that makes some of the finest DSLR cameras in the business is bound to have a different perspective on smartphone cameras. The triple 12MP unit here gives you uncommonly natural shots, freakish autofocus speeds, and extensive manual control options. 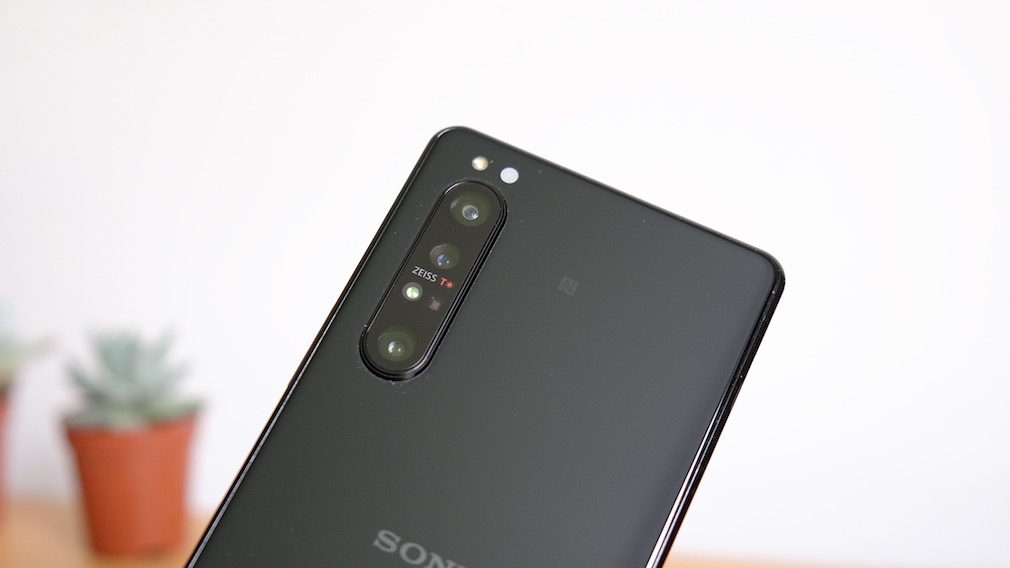 The Sony Xperia 1 II is powered by the same Snapdragon 865 CPU that you'll find in the OnePlus 8 Pro, the Black Shark 3, and most other high-end 2020 phones. That's backed by 8GB of LPDDR5 RAM, which isn't the largest allowance out there, but is still more than enough for gaming.

This uniformity is a good thing when you're talking about gaming performance. The Sony Xperia 1 II runs all the usual system hogs with contemptuous ease. Whether we were running laps on GRID Autosport (with HD packs installed), or maxing out CoD Mobile's graphical settings, we barely missed a frame. 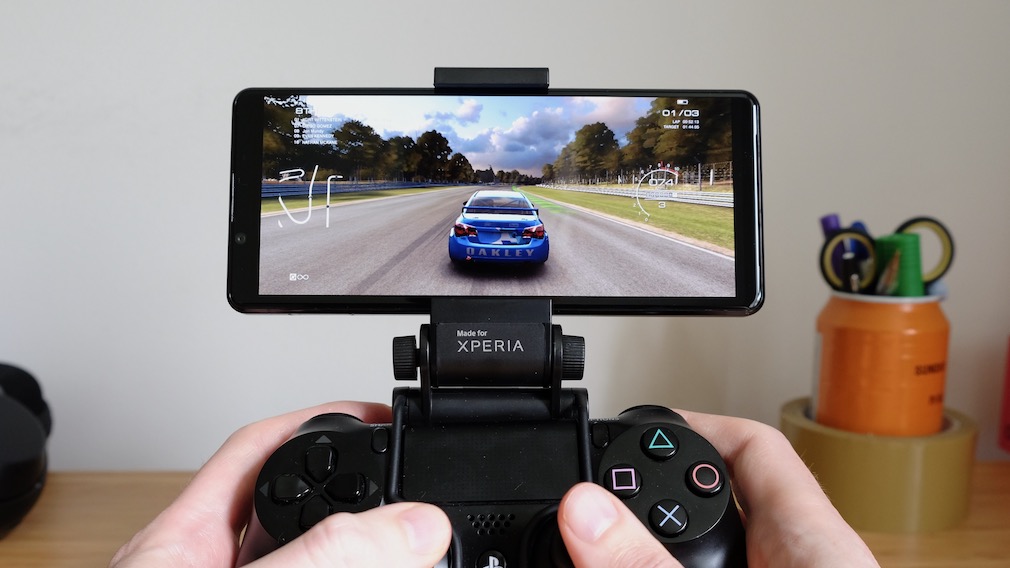 Of course, there are fewer potential frames to miss thanks to Sony's decision to go with a 60Hz display rather than the 120Hz of the OnePlus 8 Pro or the 90Hz of the Black Shark 3. Sony's display approach is arguably better suited to cinematic content than gaming.

Still, a game that offers a solid 60fps experience, like Grimvalor, feels plenty smooth enough here. Not every game has been optimised to reach this point, let alone to go beyond it, and no iPhone (yet) goes beyond 60Hz. 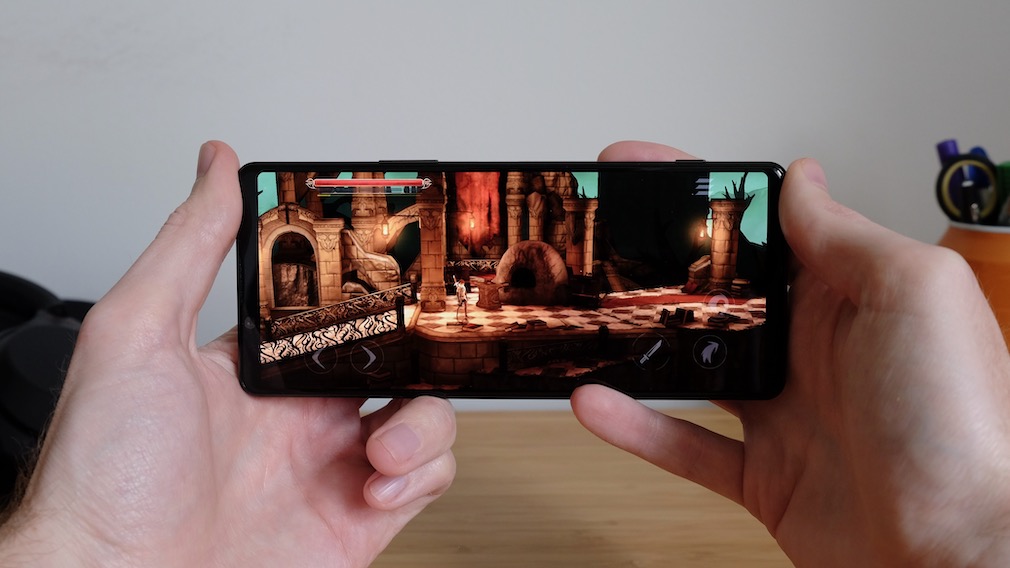 When utilising Sony's own PS4 Remote Play app to stream content to your phone, you certainly won't be exceeding 60fps. Higher frame rates are for the next console generation.

21:9 is a good aspect ratio for landscape games, too. It just feels likes your thumbs are less in the way, and that you've got a better, more immersive view. But it will leave borders on games that don't support it.

The Sony Xperia 1 II harnesses much of Sony's expertise in display, camera, and audio technology to produce a fine and distinctive flagship phone.

The omission of a high refresh rate display is the main mark against its gaming credentials. This is a £1,099 phone released smack bang in the middle of 2020, when 90Hz and 120Hz screens have been widely adopted further down the price scale.

We'd still say the OnePlus 8 Pro is the best Android phone for most gamers, and that the Black Shark 3 has the hardcore/competitive gaming edge. But the Xperia 1 II is a great alternative pick if you watch and snap as much as you play.

While it lacks the super-smooth refresh rate of some of its rivals, and it costs a little too much money, the Sony Xperia 1 II remains a formidable and distinctive phone. Its super-sharp widescreen notchless display and potent performance renders games brilliantly, and it's generally a joy to use day to day.
By Jon Mundy
| Jul 3, 2020 |
Android
SEE COMMENTS

The best 23 free games to play on your iPhone, iPad or Android Phone in 2020 - Updated