This latest port is called Rogue Legacy: Wanderer Edition, and it contains all post-launch DLC and updates for the original PC and console versions. From today until August 11th, you’ll be able to pick it up for only $0.99 – a huge reduction over its normal $3.99 price tag.

For those not in the know, Rogue Legacy is a hard-as-nails roguelike where you play as descendants of your original character. Every time you die, you start out anew as the next generation of your family, fit with a number of unique traits – not all of which are exactly helpful.

The aim is to make it as far as possible through the game's interconnected world, amassing as many coins and items as you can, before you inevitably die to some giant, floating monstrosity. The combat and platforming feel great, being pitched at just the right speed so as to remain manageable.

It’s also surprisingly accessible for a roguelike, allowing you to level up and stash small amounts of your collected cash for the next generation. The concept is a little like Infinity Blade’s, though the numerous traits that you can select from keep it feeling far fresher for longer. 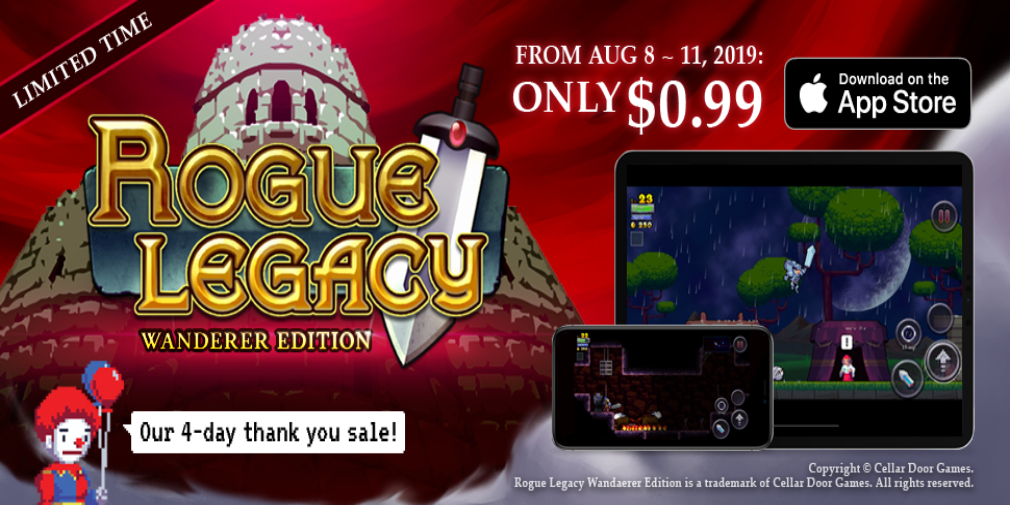 The controls have been completely reworked for touchscreens, and – from what I can tell – they seem to work really quite well. And that’s a huge relief because, as I say, Rogue Legacy is no pushover. The Wanderer Edition also adds new traits, rooms, and mini-bosses.

If you’re at all interested in this one, it’d be wise to nab it now when its price is so low. After August 11th, it’ll go back up to $3.99, which, to be fair, is still a very reasonable price for what is one of the best roguelikes around. So, make a quick trip to the App Store and check this one out.