Out There Switch review - "A luck driven story-sim"

It consists of simple resource management fused to a rogue-like story generator. You'll fly from star to star, exploring planets and other oddities that you find in orbit. Doing so depletes your three primary resources, fuel, oxygen, and hull. To replenish them you must probe gas giants and drill on rocky planets. Fail to do so and it's game over.

You drive all these actions via a simple touch menu. It's easy to get the hang of but the animations and fades from one screen to the next get repetitive. On the Switch, button and joystick control seemed to be something of an afterthought. It's far smoother to pick the tablet up and tap on the screen.

Out there or in here?

Your goal is to return to earth, but it might change depending on what you encounter along the way. You're far from alone in this portion of the cosmos. Many planets will have an atmosphere, and many of those contain alien life.

They'll question you in an alien language you'll slowly learn. Oddly, though, they only ever ask yes or no questions. Get the answer right and they'll reward you with the chance to trade resources for technology.

This is where the game begins to open up. Those three primary resources aren't the only ones you can find. You can use the others to build powerful new alien technology once you find the blueprint. However, all resources and new tech take up the limited slots in your ship. What are you willing to sacrifice to get that nasty-looking Death Seed installed?

Among the planets, you can encounter various other anomalies like space stations, abandoned ships and worse. And for a while, exploring the galaxy, trying to survive while juggling resources and tech, is quite compelling. But after a while, a problem begins to dawn. 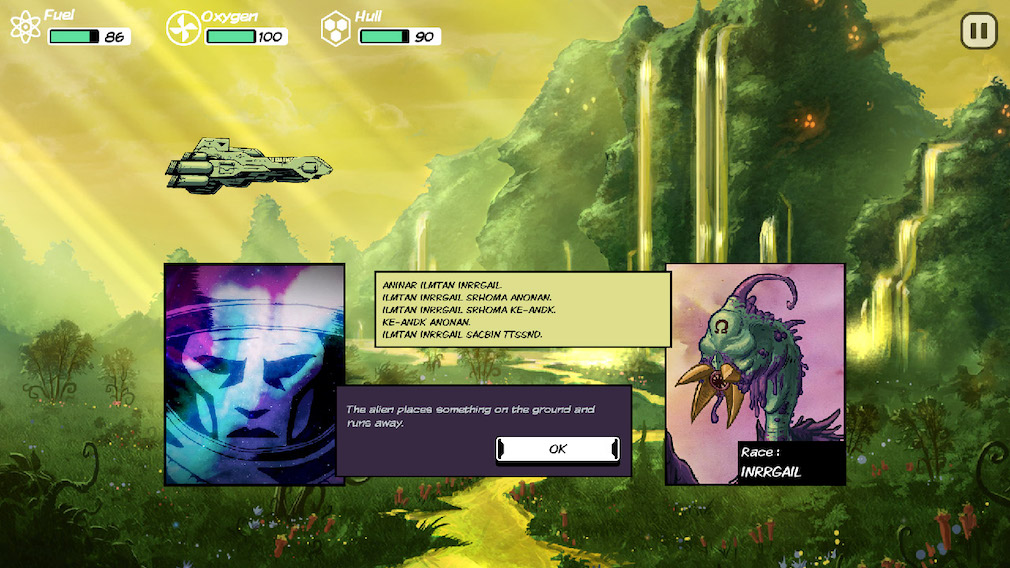 There's very little information in the game on what you might encounter up ahead. Some system types are more likely to contain certain kinds of planet, and that's about it. So, when you're low on fuel - the resource that burns fastest- you need to go looking for gas giant planets. Whether you find one is down to in-game randomness. If you do, you need to probe it for fuel. Whether you find any is down to in-game randomness.

Same goes for iron if your hull needs repairing or oxygen if your life support is running low. Same goes for whether or not you get a good alien encounter on an atmosphere planet or whether it offers you some useful tech. Same goes for the chance of finding more interesting encounters that push the story forward.

In essence, while Out There has the superficial trappings of a strategy game, survival is pure luck.

Oh, you can do the odd thing to increase your chances. Some ship types are definitely better than others. And if you find a good one you can use it in future journeys. But how many attempts it'll take before you find a decent replacement for your starting craft? You guessed it: luck.

Yet Out There manages to be more addictive and enjoyable than this frustrating flaw suggests. The very uncertainty that makes it a pain drive you onward, hoping for better luck next time. This is the driving force of most rogue-like games and this one makes a decent fist of it.

It's ably supported in this by reams of well-written paragraph text. Most new systems you visit begin with some kind of - wait for it - random encounter. Sometimes you'll get to tap on a choice, sometimes you'll just have to take the effects good or bad. But while it's yet more chaos in this vibrating entropy engine, these encounters give your journey a fascinating shape.

The palette strikes a great balance between sci-fi tropes like abandoned hulks and more imaginative fare. It's hard to say much without spoiling the potential surprise, but some pack quite an emotional punch. And with more than 350 potential encounters, it'll be a while before they start to repeat themselves.

Whether you'll still want to play by the time you've seen the bulk of them is another question. With a simple, luck-driven core system a lot of gamers are going to find themselves bored before they get that far. This is much more of a game where you sit back and watch what unfolds rather than the traditional head-on challenge. But if you're in the mood for a gentle story generator where the resources can sometimes pack quite a bite, Out There could be for you.

Want more? Check out our 27 other Out There articles!

Whether you live or die is almost entirely down to the whims of fate, but that's kind of fitting for the strong stories Out There presents
By Matt Thrower
| Apr 30, 2019 |
Switch
Find out more about Out There

Out There: Omega Edition and Out There Chronicles are two narrative space adventures worth picking up while they're on sale