Reigns: Game of Thrones featured review - "Does it take the Iron Throne or lose its head?"

Making games for mobile isn't just about understanding the limitations of the platform, it's about embracing the inherent familiarity of mobile control. It's a trend we've seen with the rash of phone-within-a-phone games, but Reigns: Game of Thrones could easily slide into that bracket too.

It might seem strange that a game set in a fantastical interpretation of the war of the roses could reflect something so modern, but when you think about it the game is essentially two powerful forces of modernity crashing together.

On the one hand you've got the freedom of mobile play, and on the other you have the surprise cultural behemoth of the past decade. Everyone has phones, everyone likes Game of Thrones, what could possibly go wrong?

For those of you who've never played a Reigns game before, here's a bit of a primer. You're playing a monarch, and you need to make difficult decisions. Along the top of the screen there are meters that represent your popularity with different factions in the world. If any of these ever fill up or empty completely, it's game over.

You're trying to rule for as long as possible, whilst also attempting to discover the secrets and mysteries that underpin everything you're doing. Reigns: Game of Thrones follows a similar path, but there are a few twists thrown in here as well.

For one thing, certain characters can trigger events that will protect them from the whims of their populace. Let's put it this way - if you've got a dragon, there's a pretty good chance that people are going to do what you say. 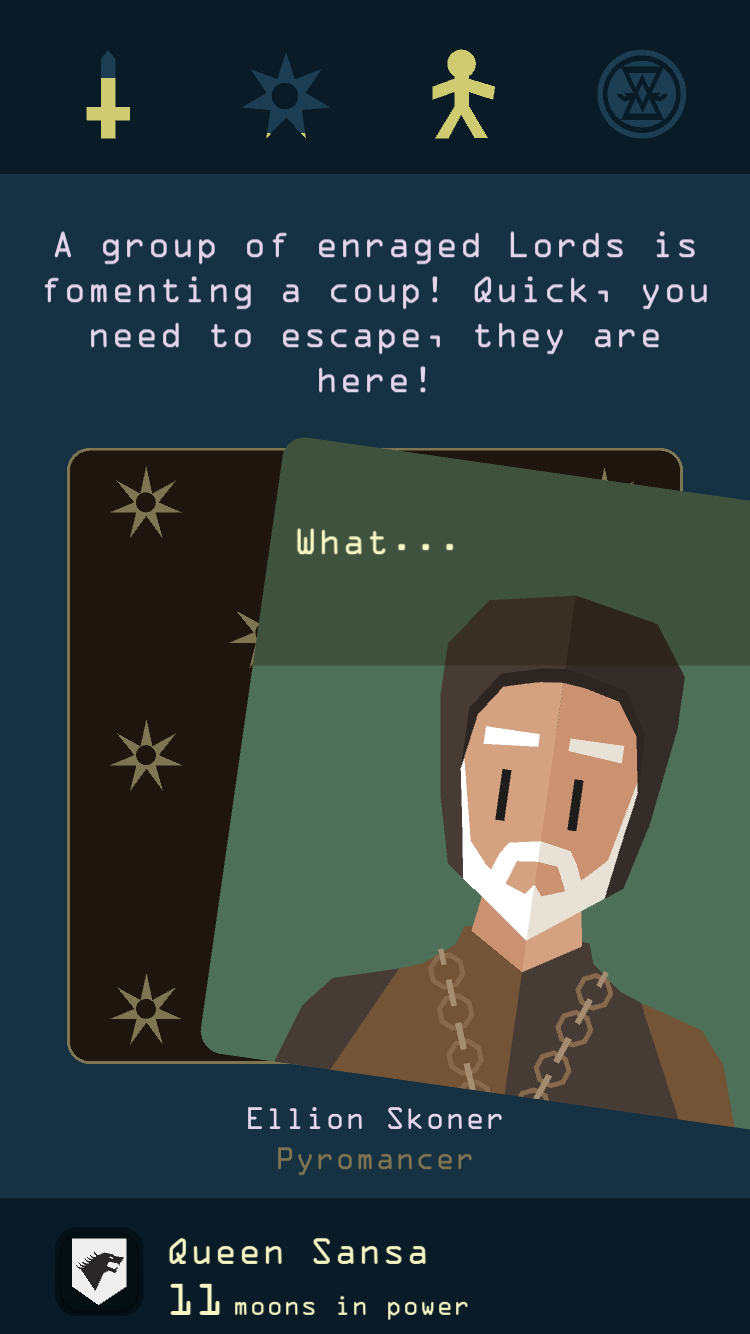 There are other new ideas here though. You can travel between destinations in the realm of Westeros, making choices as you go. There are battles and tourneys to engage in as well. And if behind the scenes machinations are more up your street, there's plenty of wheeling, dealing, and subterfuge as well.

But everything still plays out with the swipe-left-or-swipe-right mechanic that's so easy to pick up. You get some information about the consequences of your actions, but not enough to be sure you're going to be safe when your choice is made.

There are a number of different characters for you to unlock, and they offer different choices and cards when you've found them. The game manages to foster a sense of exploration, even though it's difficult to think of a more stationery game. And the way it does it is brilliant.

You can think of Reigns: Game of Thrones as a bit like a metroidvania game, albeit without the platforming or the boss fights. There are things to find that are going to unlock new opportunities for you, and those opportunities are always well signposted before you have the knowledge to get to them.

Because it's not new skills or powers that you're earning, it's information. Secrets you discover at one edge of your nascent empire might well change the way you act with people at the other. The game is littered with tiny 'eureka' moments that push the plot along and drive you towards new goals.

That means that even short reigns can alter the way you think about certain people. Slivers of information can shift your perspective in incredibly subtle ways, and working out what to do with the whispers you uncover is a good chunk of the fun here. 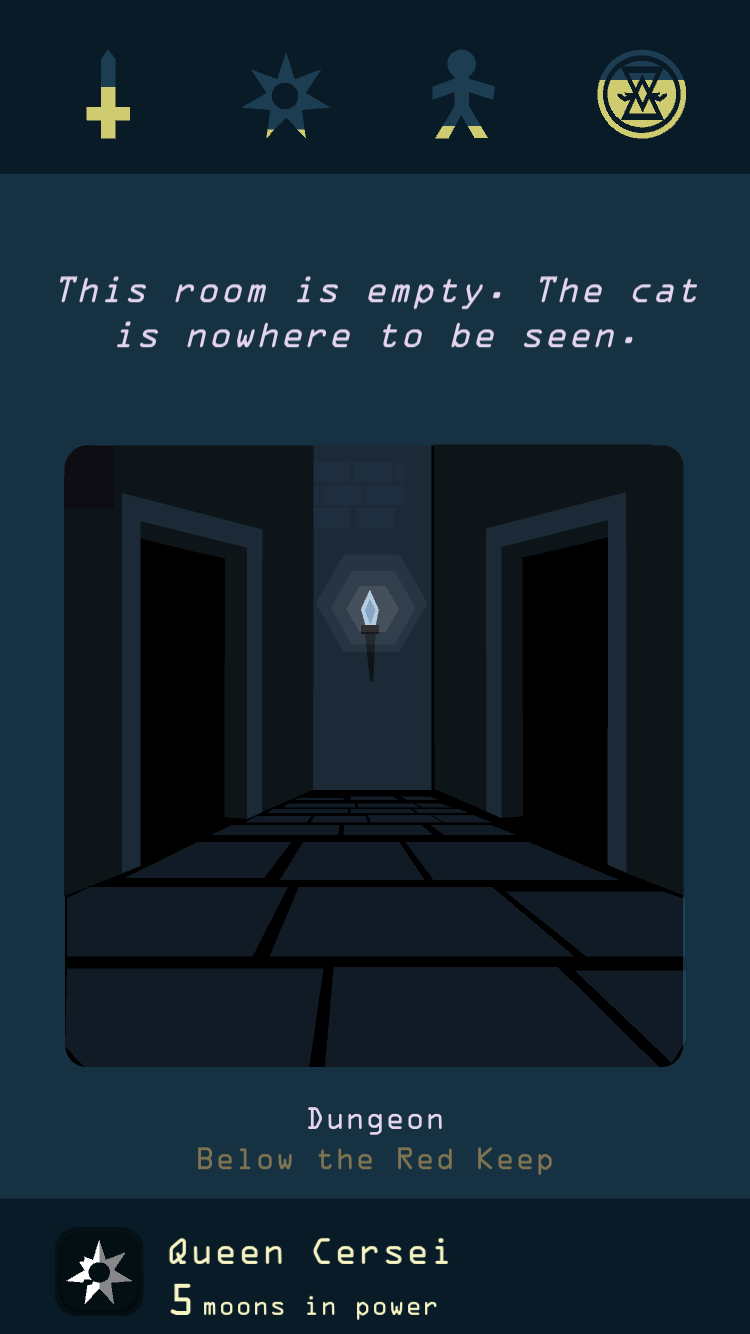 Because Reigns: Game of Thrones is packed full of familiar characters, there's plenty of scope here for role play. You can make the choices you think Tyrion would make, or you can see how his rule might play out if he did something completely outlandish.

There's so much potential for exploration, not just of the world of Game of Thrones, but of the characters as well. The game manages to balance out its own narrative with the stories that you're going to generate through play, and that means there's almost always something interesting happening with every reign.

Then there's winter. Survive on the Iron Throne for enough time and eventually the long night descends on Westeros. Then your decisions become more difficult, and the spectre of the Night King haunts everything you do.

Back in the old days of gaming, no one ever got excited about a game based on a license. They were shovelware, designed to catch the crest of a branding wave rather than made with the fans of the show or film in mind. Reigns: Game of Thrones is very different though.

For one thing there's no branding to be done - the next season of Game of Thrones doesn't land for months, and pretty much everyone is going to watch it anyway. Instead this feels like a perfectly sensible, measured combination of two IP that were always going to work well together.

Now, there are some niggles here. For one thing, the writing in the game, while still good, isn't up to the standards of Reigns: Her Majesty. We spotted spelling and grammar mistakes too, which is a bit of a kicker in a game that's basically all reading and swiping.

And then there's the danger inherent in all Reigns game - a couple of bad stints in charge and you're going to start wondering what the point of playing on is. Reigns: Game of Thrones counters that with faces you know - you're far more likely to push on to find characters you're familiar with.

Sometimes stories fizzle out before you've got to the bottom of them, and there's no way to keep track of what you know and what you think you know except in your own head. Which is fine, if your head works the way it's supposed to. 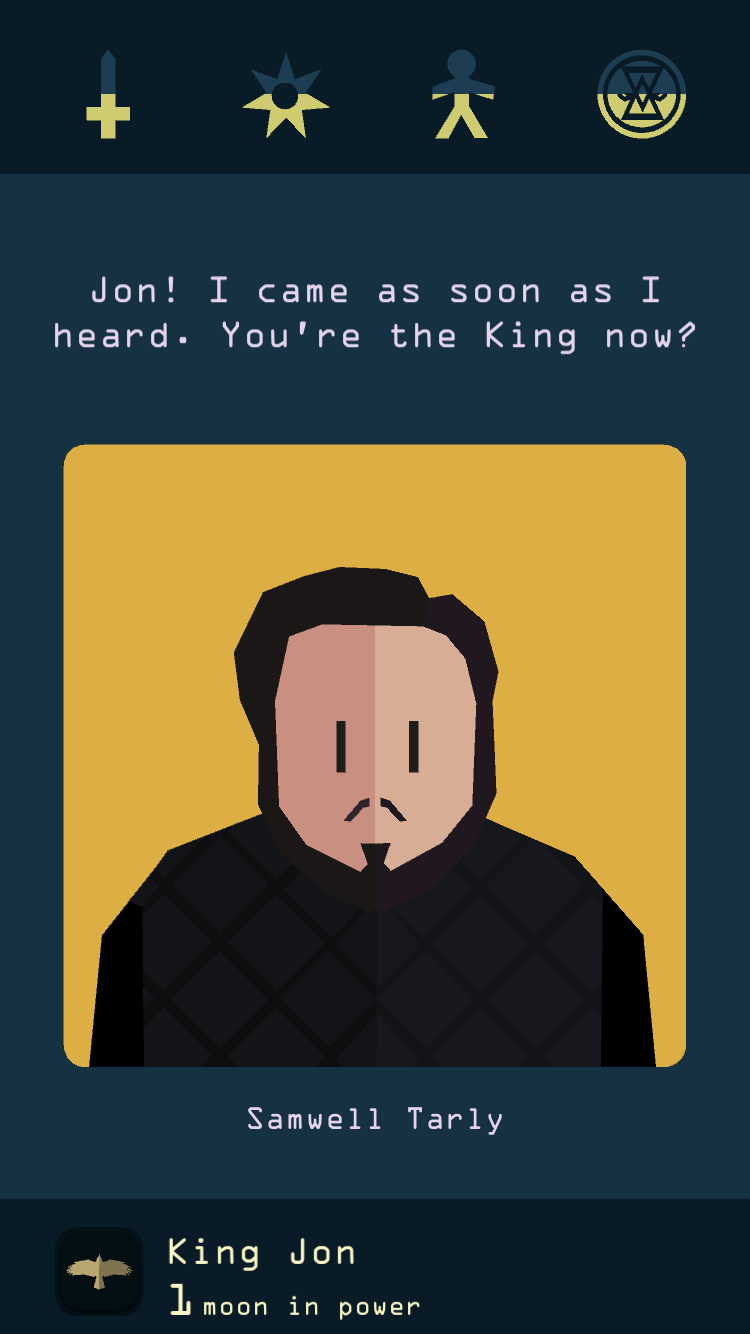 But these are little problems, and they don't detract too much from the experience as a whole. This isn't a franchise pushed into a shape it should never be in for monetary gain - it's a coming together of two concepts that gel together in really interesting ways. Reigns grows as much from the connection as Game of Thrones does too. There's no laurel-resting going on here, and that's great to see.

Throne in the dungeon

Is Reigns: Game of Thrones perfect? No, not at all, but it's a wonderful game in its own right. And anyone looking for some GoT-themed distractions to keep them going until the new season will definitely find a lot to love here.

I sat and played through a couple of reigns with my partner, making the choices together, trying to lead Jon through assassination attempts, wars with Dorne, and much more. But we played together, experienced the highs, lows, and inevitable betrayals.

Even if you're not into videogames, Reigns: Game of Thrones is so simple to understand, and so effective at creating the world we've all come to know and love, that you'd be doing yourself a disservice if you didn't pick it up.

Want more? Check out our growing collection of Reigns: Game of Thrones articles!

Master Trainers are coming to wreck you in Pokemon: Let's Go!

With Reigns: Game of Thrones coming tomorrow, we look at the first two Reigns games

Everything you need to know about Reigns: Game of Thrones for iPhone, iPad, and Android