Tower Fortress - Downwell, but in the other direction, and not quite as good

Tower Fortress is a game that refuses to hold your hand. It gives you some buttons, it gives you a level, and then it leaves everything else down to you.

In one way, that's pretty refreshing. It's nice to have to figure out what you're meant to be doing on your own. In another way though, it leads to a decent chunk of frustration.

Because of the hands-off approach, there's a chance you're going to miss out on one of the key aspects of the game, quite literally, and that can lead to a good deal of annoyance.

The game is essentially a roguelike. You're stomping your way through a vertical dungeon, shooting everything that moves. You collect coins as you go, and you can spend these on new power suits.

The enemies are tricksy, and you've only got a small amount of health each run. Luckily you've got more than your starter weapon at your disposal. 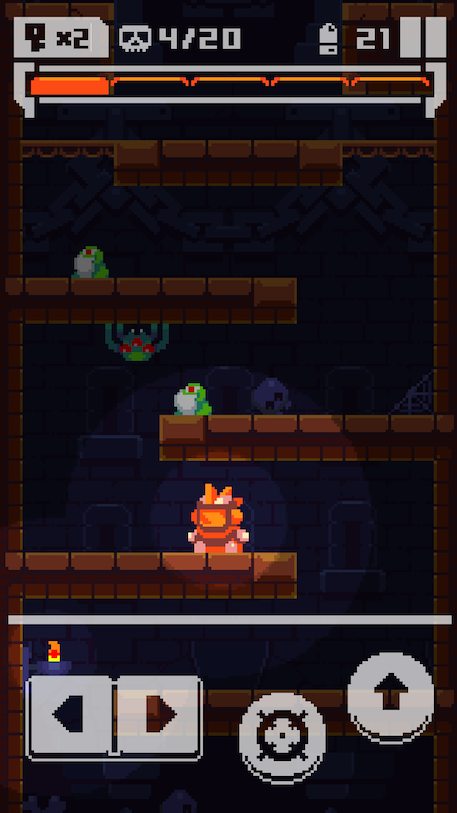 Then there's your jump attack. Tap jump once you're still vulnerable. Tap it twice though, and you pull off a Sonic-style spin attack that shreds your foes to bits.

There's also a key system in the game, and it's this bit that's easy to miss. Kill a set amount of bad guys and you'll get a key. Get to the end of a level and you can use this key by jumping at a keyhole.

Tower Fortress is by no means an easy game, but then you wouldn't expect that from the genre. There are some problems though. On smaller screens, sometimes you press the wrong buttons. And in a game that demands precision, that can be annoying, and deadly.

But the key thing is, even when you do die, you're going to want to jump back in. The action here is slick and frantic, and there's a real joy to getting deeper into the game than you have before.

Remember the keys, and remember not to rush in, and you'll find yourself enjoying your time with Tower Fortress.

It's not vintage Nitrome (it's only the publisher here), but it's still a damn sight better than a lot of free blasters on the App Store.

A well put together hardcore shooter with a few niggles that holds it back from greatness
By Harry Slater
| Nov 17, 2017 |
iOS
Find out more about Tower Fortress

Downwell-inspired Tower Fortress arrives on iOS and Android this week

Action platformer Tower Fortress has a new Steam trailer, but we're still waiting for an iOS and Android release date

The retro-style, tower climber Tower Fortress will be published by Nitrome