Eight-Minute Empire does pretty much exactly what it says on the tin. It's a board game adaptation that lets you play through the life-span of an empire in a handful of minutes.

It's fast, it's smart, and if you look beneath the simple idea that surrounds it you'll find an experience with an intricately built depth to it.

The game can be played by up to five different characters. These can be controlled by the AI, or by other humans in pass and play, asynchronous, or synchronous online multiplayer.

Each player is represented by a colour. This is your nation. You all start at the same point, and then spread out across the map. 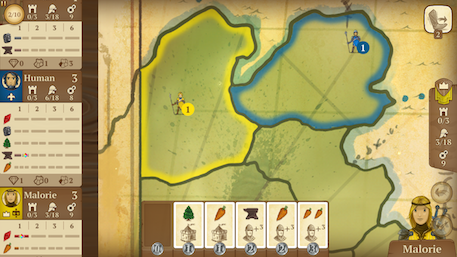 The aim of the game is to have more victory points than the other nations at the end of the tenth round. You earn these with cards. Every turn you pick a card from a shared deck of six along the bottom of the screen.

These cards cost coins, and you've only got a finite supply of cash. Each card gives you some resources, as well as letting you complete one action.

Actions might involve hiring more troops for your armies, building a new castle, or moving some of your forces by land or sea. You can also take out other player's troops.

It might not sound like there's much strategy going on here, but there's more than enough to get you scratching your head. Controlling regions gets you one VP at the end of the game, as does controlling continents. 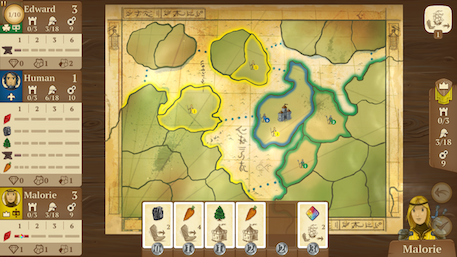 So you need to balance out offence and defence, pushing your armies out into the world while making sure you're not leaving gaps that your foes can sweep in and take.

Things get particularly interesting towards the end of play, when you're trying to out-manoeuvre and consolidate at the same time.

The fact that the game manages to cram so much into such a small play time is pretty impressive. And since this is a digital game, there's no set up or pack away either.

For those of you who like your board games fun, fast paced, but far from random, this is a brilliant place to start.

A bright and super smart board game adaptation that won't suck hours out of your day
By Harry Slater
| Sep 6, 2017 |
iOS
Find out more about Eight-Minute Empire

If you're looking for a board game deal for iPhone and iPad this Monday, Acram Digital has you covered

Eight-Minute Empire, the brilliant bite-sized strategy board game, is on sale for iOS