Like a lot of indie games on the Switch eShop, Death Squared isn't a new release - it came out on various consoles earlier this year.

A puzzler designed for playing with other people. Well, there's only a couple of ways that can go.

Death Squared is an isometric puzzler which you can play by yourself, with a friend, or in a group of four in couch co-op mode.

Each player has to guide a coloured robot to the same coloured goal. While that may sound easy, the game's got other plans. 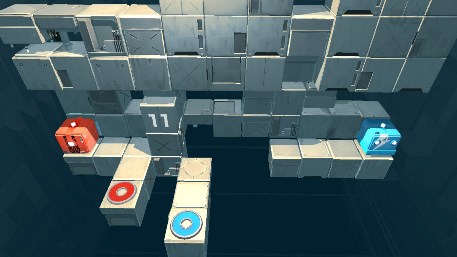 Between invisible blocks, lasers, spikes, falling platforms, and more, you'll die a lot in the game. But that's okay. Sometimes it's the only way you'll figure out the answer.

The levels may start off super easy, but soon you find that you've got to start really thinking your way around the problem as different traps, buttons, and moving platforms are thrown into the mix.

The thing that stands out about Death Squared is that though it's designed to be a multiplayer game, it's just as enjoyable when played by yourself. You don't have the banter, but the puzzles are still the same and it's not impossible to control.

Mechanically similar to Brothers: A Tale of Two Sons if you're going at it alone, you control one robot per controller. The joystick is the only thing you need to use practically, but the other buttons do make the robots dance, blink, and shine their little lights. It's cute.

The sound effects and the backing music are all fitting to the environment and the theme, and neither element overpowers the experience by being too loud or distracting.

Aside from the puzzles, one of the best parts of the game is the narrator's banter with the AI unit. Both parties manage to set the scene and keep you engaged, whilst also providing a refreshing touch of humour that seems to almost mix The Stanley Parable and Portal.

Needless to say the game works like a dream on the Switch and fits in nicely with the platform's capabilities. Both docked and undocked, it feels right at home.

On the negative side of things, the longevity of the game is a little questionable. It may be fun at first, but the repetition of the gameplay may make it more of a 'few levels at a time'-sort of game. 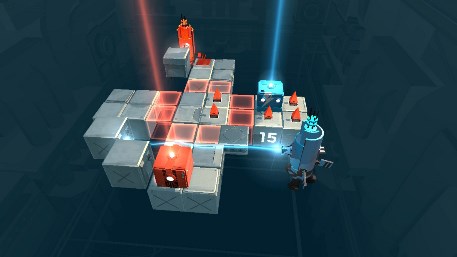 And while it's smooth to begin with, it isn't uncommon to see a few glitches here and there. Luckily, they tend to be more hilarious than perturbing.

Similar to Overcooked, its lack of online play may be an issue in the long run. Given that a lot of people play with friends in different cities/countries, it won't really be accessible to them.

Get your ro-butt in gear.

All in all, Death Squared is actually a brilliant puzzler which fits in with the Switch with no problems at all.

Fun to play with friends at home or on the go, it's an excellent game to have on hand for quick or longer sessions - so long as you can avoid shouting at each other.

Death Squared is a well-made and entertaining cooperative puzzler which seems a pretty darn perfect fit on the Switch
By Emily Sowden
| Jul 13, 2017 |
Switch
Find out more about Death Squared