It's all about the Norse

If you're a big King fan you'll be interested to know that Legend of Solgard has soft launched on Google Play. 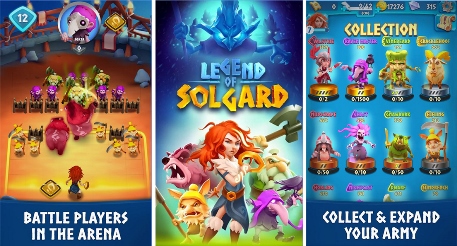 Legend of Solgard is a tactical RPG based on Norse legend and chocked full of collectible characters. As an interesting take on match-three, you need to combine three of your creatures in order to send them into battle. The aim of the game is to destroy the ice portal, defeat the bad guys, and restore Solgard to its former glory.

You've only got a certain amount of moves and a select number of health points - a little like Hearthstone - to make it through each battle. It's not only about matching creatures together, but also about creating the best strategy to win the round.

Band together with other players to form a Guild and take on powerful Guild Bosses, power up, grow, and develop your hero and army with epic powers and upgrades. Plus, there's a ton of loot and allies to collect, so lots to do.

Grab Legend of Solgard free to play on Google Play now. We're not sure yet when it'll be heading into soft launch on iOS, but we'll keep an eye out.

Want more? Check out our growing collection of Legend of Solgard articles!

Legend of Solgard cheats and tips - Full list of EVERY creature