There's one guarantee to Nintendo's New 3DS: the name is bound to cause consternation in shops all over the world, as parents try to figure out the difference between an old 3DS, a new 3DS and the "New 3DS".

But moniker muddling aside, it's also a product which is certain to give the device the forward momentum it needs to keep the tills ticking over in 2015 - and we're about to explain why, thanks to the fact that we've been lovingly caressing the Japanese version of the console for the past few weeks.

The New 3DS is available in two flavours: the standard model is the smaller of the two, and is only slightly larger than the original 2011 3DS; and the New 3DS XL is a bigger console with larger screens. We're reviewing the former here, so we can report on one of the system's most appealing selling points: removable covers which can be replaced with a number of new designs. 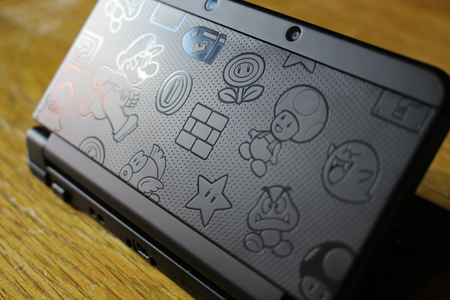 Customisation aside, the New 3DS is about as sexy as portable gaming hardware gets when it's not fashioned from brushed metal. The entirely plastic construction is a deliberate move of course; Nintendo knows full well that a large proportion of its audience is young children, and therefore designs consoles which can withstand punishment rather.

Still, it's a nice-looking device, and the aforementioned cover plates make it even more attractive. Our black model comes with dark grey plates as standard, but we ordered an embossed set which is adds to the console's aesthetic appeal immeasurably.

Open up the system and you can spend a few minutes of playing a fun game called "Where has Nintendo moved everything this time?" Practically every physical element has been shifted around - the game card slot is now on the bottom edge, joined by the stylus dock and power button. The Start and Select keys have moved, and the volume slider is now next to the upper screen.

Some of these changes make sense, but others take some getting used to - the power button is simply in the wrong place entirely, and is hard to locate and press when you're in a hurry. 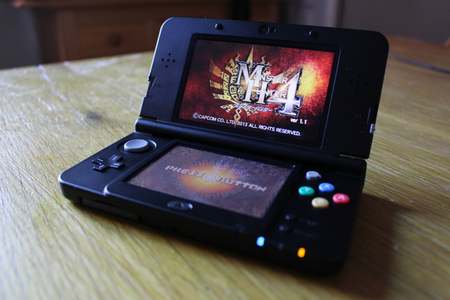 There's new stuff to mention here, too. The New 3DS finally offers a second analogue stick as standard, although this second "C-Stick" isn't the same size as the existing Circle Pad. It's a nipple-like rubber nub which sits alongside the four SNES-coloured face buttons. Reaching it isn't an issue, and despite its rather stiff feel, it works extremely well.

On the top edge you'll discover two additional shoulder buttons, positioned right next to the existing ones.

The SD card bay has been removed entirely, and is replaced by a MicroSD slot which is located not on the side of the machine, but beneath the rear face plate, which can only be removed using a screwdriver. A 4GB MicroSD card is included, but you can upgrade this cheaply to give yourself more room for digital downloads.

Cast your mind back to the first time you ever played a 3DS. Back when the concept of glasses-free 3D was a massive deal. It seemed like witchcraft - until you realised that even the slightest change in posture or head movement was enough to break the illusion of depth. This issue was so bad that many 3DS owners have been playing their games with the 3D slider set to "off" since 2011.

Nintendo has solved this problem with the New 3DS. The console's front-facing camera now tracks the position of your bonce, making adjustments to the autostereoscopic screen to compensate. 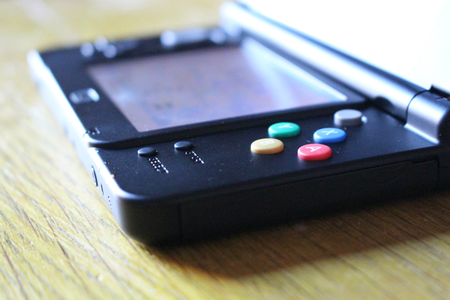 The end result is a rocksteady 3D image that can only be broken by drastic movements, or moving your head out of the camera's view altogether. However, glancing back at the screen is enough to lock-in the image once more, and the screen even "jumps" slightly as the camera recalibrates.

It's a successful solution that even works in low-light conditions, and finally makes the console's selling point worth using again.

Nintendo has also bolstered the internal hardware to improve the overall experience. There's a swifter CPU onboard this time around which not only speeds up general navigation around the console's UI, but also makes for smoother web browsing. Downloads are also quicker, and Nintendo promises exclusive New 3DS software which will exploit the more powerful hardware, starting with a port of the Wii RPG Xenoblade Chronicles, expected some time next year.

The New 3DS naturally runs all of your existing 3DS games, as well as being backwards compatible with older Nintendo DS titles. It uses the same eShop for digital downloads, and by performing a System Transfer you can port all of your data and purchases over to the newer console.

While the 2012 3DS XL offered larger screens, the New 3DS feels like a proper upgrade over the original machine. The faster CPU means quicker boot times and a smoother user experience, while the drastically improved autostereoscopic display means you're unlikely to turn that 3D slider off again. 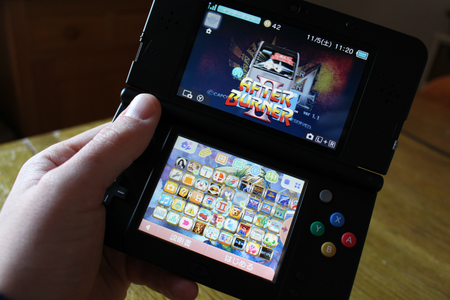 The additional controls mean that we can finally pretend that the Circle Pad Pro never existed, and the removable face plates open up a whole new world of obsessive collecting.

While it's good to have the option of picking up the larger XL model, we found that this standard edition strikes the perfect balance; the screens are slightly larger than the ones on the 2011 version, but not so big that pixels are too obvious. Having had some play time with the larger variant, we can say that we actually prefer the smaller edition.

Arguably the biggest disappointment is the lack of radically improved stamina; the New 3DS offers around an hour more play time than the original console, which is around 5 to 6 hours. We can only speculate that when exclusive New 3DS software arrives and makes more demands on the hardware, that time will drop.

Seeing how cheap rechargeable batteries are these days, it's a crying shame that Nintendo didn't see fit to include a much roomier power cell this time around; battery life has always been a sticking point with the 3DS line of consoles, and sadly that won't change with this newer model. 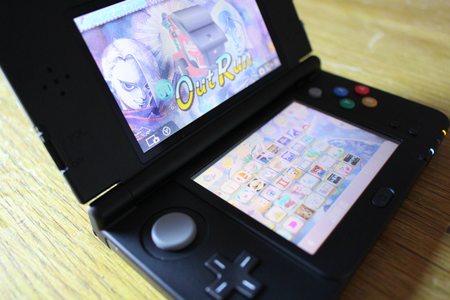 Battery concerns aside, the New 3DS is a successful upgrade on what has gone before. The head-tracking used to maintain the 3D images is ingenious, and the additional analogue stick will come in handy when Monster Hunter 4 Ultimate launches next year.

The New 3DS is currently only available in Japan and won't arrive in North America or Europe until 2015, so there's plenty of time to make your mind up about whether or not you really need to trade in your beloved 3DS or 3DS XL; however, our advice is to start stockpiling those pennies because this revised console will make you fall in love with Nintendo's popular portable all over again.

Knights of Pen & Paper gets a Halloween update right on time... sorta