There are moments in Third Eye Crime - such as when you're literally drawing lines around the guards who are trying to discover you - when it feels like the perfectly executed mobile stealth game.

And then there are moments when everyone, from the fat, wobbling pursuers to supposed super-thief Rothko, is just bimbling about like a moron.

More often than not it gets things right, though, and save for a few cruel difficulty spikes here and there, and some strange design choices that get in the way of your enjoyment, you'll have a lot of fun in this noir-ish tale.

Just be ready to take a frustrating kick to the head from time to time and you're likely to enjoy everything else. 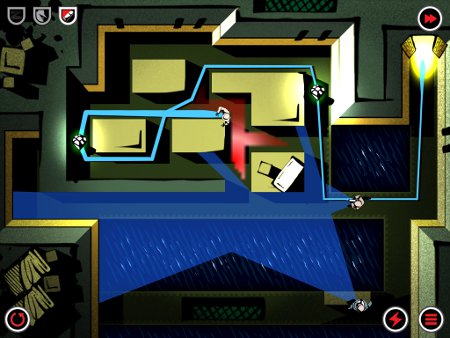 Despite my confidence, this path only served to get me shot in the face

You play as Rothko and follow a comic book plot full of dames, stolen art, and spats-clad goons out to whomp you all the way to Sing Sing.

Everything about the presentation of the game is refreshingly different, albeit with a nostalgic wink to the likes of Raymond Chandler here and there.

The aim of the game is always to get to an exit. There might be stuff to snaffle on the way too, and your path is inevitably blocked by packs of guards, guns, and goons.

Thankfully, Rothko is a bit psychic, and as well as being able to see vision cones springing out of the chests of his would-be capturers he can tell where they're going to start looking for him once he's spotted.

Chunks of the floor glow red once a guard has seen you, and the fiercer that glow is, the quicker they're going to descend on that area to check for you.

You move by drawing a line from Rothko to his destination and, on some of the levels, it's entirely possible to trace a single line that gets you from the start, bypasses the guards, nabs the loot, and leads to the exit.

You also have psychic powers. The game can be finished without them, but they give you a boost when you're in trouble. 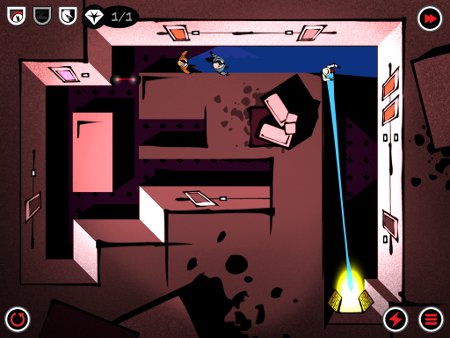 As you play you'll be given new powers on some levels. There's a buzzer that you can drop. A timer ticks down and when it runs out a noise is set off drawing the attention of the guards.

Other levels give you a sprinting ability that lets you clear large sections of the level in a much quicker time.

There is something strange about the ability to run being 'granted', and there are times when you wonder whether a master thief being shot repeatedly in the spine might not just naturally pick up his pace a little.

It exposes the fact that this is a puzzle game before it's a stealth game. That's fair enough, but it becomes a slightly less interesting prospect when you realise that.

Add to that some really cruel difficulty spikes, and some less than perfect enemy AI, and you're left with a game that doesn't quite live up to its gorgeous presentation. 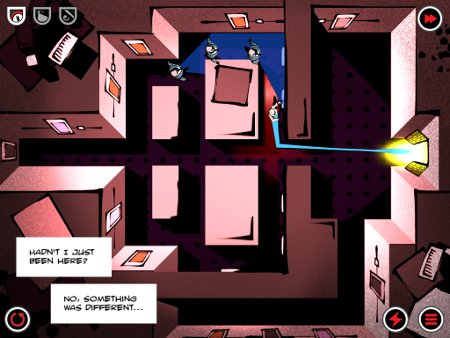 Third Eye Crime has its moments, and it pulls them off with confidence and aplomb. It's in the less exciting sections, the bread and butter of the game, where it loses its way a little.

It's bright and bold, and the red-splashed noir atmosphere is worth experiencing. It's just a shame that it can't quite manage to balance its stealthy progression with its puzzling core.

This might not be the great stealth game fans have been waiting for, but it's still worth a good chunk of your time.

It might not fully live up to its promise, but Third Eye Crime is good enough that you'll find something to enjoy
By Harry Slater
| Apr 30, 2014 |
iOS
Find out more about Third Eye Crime
SEE COMMENTS

Third Eye Crime, the Bronze Award-winning stealth caper, is free on iPad and iPhone for today

Out at midnight: Third Eye Crime is a stealth game with a psychic twist