Like every Nexus phone, the LG-built Nexus 5 is primarily a reference device, allowing developers to obtain the best hardware and the most current operating system for as little money as possible.

This emphasis on low price inevitably brings with it some limitations, and the Nexus 5 is no exception.

Despite packing the fastest processor currently available on the market, and a top-of-the-line 5-inch full-HD display, the phone continues to lack any form of storage expandability, and a smaller battery than you may have come to expect.

The original Nexus 4 wasn't exactly brimming with design features, but at least it had a rather fetching glass rear that shimmered when rocked from side to side.

The downside was that it wasn't particularly difficult to shatter the glass, which probably prompted the more conservative design this time around. 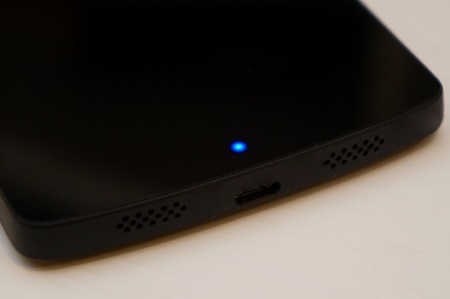 Besides the display, the only other feature of note at the front is the subtle multi-coloured notification LED

In fact, bar the large Nexus logo on the back, there's virtually nothing to talk about in terms of design. The nicest feature is the subtle LED notification light that appears periodically to alert you to new messages or calls.

It's as simple as things get, and just like every other Nexus product. But assuming you'll buy some sort of case (Google offers a choice of bumper case or a flip-cover that turns the screen on and off automatically), this simplicity isn't a big deal, and many will actually prefer the level of anonymity that the Nexus 5 affords.

Even though the Nexus 5 has a full-HD display and Snapdragon 800 SoC, there's not much else that links it to LG's flagship G2 smartphone, on which the handset is loosely based.

The Nexus 5 screen is five inches to the G2's 5.2-inch display, and instead of a 13-megapixel camera with optical image stabilisation (OIS), the Nexus 5 makes do with just eight megapixels. However, it still gets the image stabiliser.

Gone is the memory card slot, meaning you're limited to 16GB or 32GB of internal storage. However, unlike Apple, Google will only charge you £40 more for an extra 16GB, making it a wiser investment - especially if you want the best resale value come Google's next release, most likely around November 2014.

Packing the latest CPU and GPU, plus 2GB of RAM, means the LG Nexus 5 has no problems in terms of gaming performance. If a game doesn't run on this, it probably won't run on anything.

With Android 4.4, which introduces Google's 'Project Svelte' to make the OS more efficient and cope with less memory, the Nexus 5 provides a slick user experience - and it's a work in progress, so every new update should only make things better.

Few high-end smartphones have any sort of lag these days, but the Nexus 5 still feels more responsive, and it also benefits from the new Google Experience Launcher.

Although seen by many as offering a 'pure' Android experience, the Nexus 5 does have some customisations that deviate from the vanilla Android OS.

You now get the ability to say 'Okay Google' to activate the voice commands (although not officially for UK owners at the time of writing), faster access to Google Now by swiping over to the left-most home screen panel, and transparent status and soft-key bars.

The app launcher menu also sports larger icons, which might mean more scrolling but looks cleaner than a screen stuffed with small icons.

During the review period, Google rolled out a vital update for the Nexus 5 to address a concern that I've now been able to, thankfully, retract.

On its first release, the camera often failed spectacularly at the most simple of things: focussing. Without that ability, anything else was irrelevant as almost half of any photos taken were totally ruined. 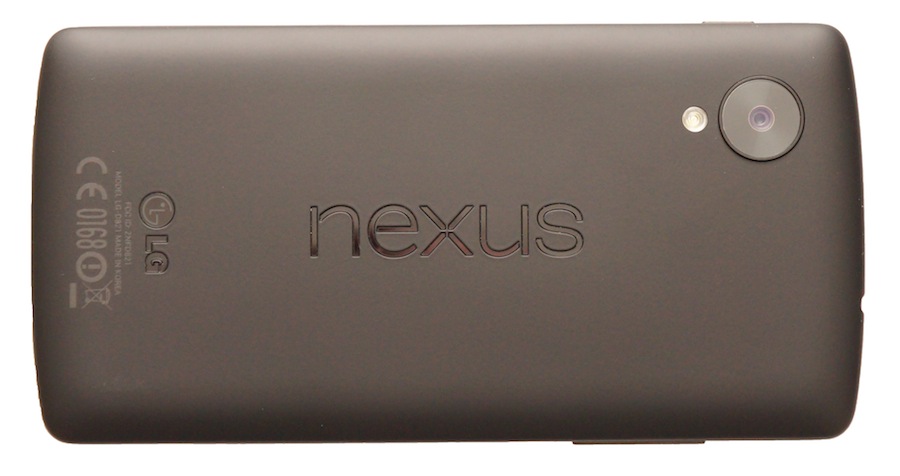 But now Google has issued a patch, and the camera is what it always should have been. Although the camera interface is still incredibly simple, with the only real control being to toggle HDR mode, or a few preset camera modes, you can be sure that when you press the on-screen shutter release you'll get something almost always in focus.

Thanks to the optical image stabilisation, even HDR shots remain sharp by avoiding any movement as you wait for multiple shots to be combined.

The Nexus 5 retains the ability to create photospheres, too - 360-degree pictures that can now be submitted to Google for inclusion on Maps. Although great fun, it can be quite hard to master the necessary movements to get a good image, and forget about taking them anywhere that movement of any kind is taking place.

The only bugbear is that unless you're willing to drop down to two megapixels, all of your shots will be in 4:3 format. Sure, that's how most photos used to be taken, but 16:9 is becoming increasingly popular for anyone sharing and viewing photos on monitors, TVs, or phone/tablet displays. 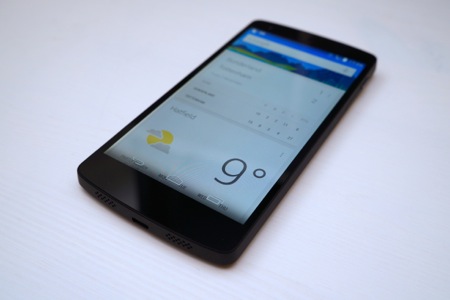 The Nexus 5 is a monster in the performance stakes, and the display is equally vibrant and impressive.

It might appear understated when off, but once it's up and running you quickly begin to wonder why you'd ever want to pay more for something that's scarcely any better.

There's support for 802.11ac and dual-band wi-fi, Miracast, Qi wireless charging, plus 4G LTE download speeds of up to 150Mbps. It's also possible to access external storage devices via USB On-the-Go, albeit with a little bit of faffing around that might deter some.

No matter what Google can do with its OS, it can't change the basic laws of physics. Pack in a powerful processor, a super-bright display, and the incentive to watch films and play games, and a 2,300mAh battery is going to have a hard time.

If you use it to download data on a 4G network, things will get tougher still. 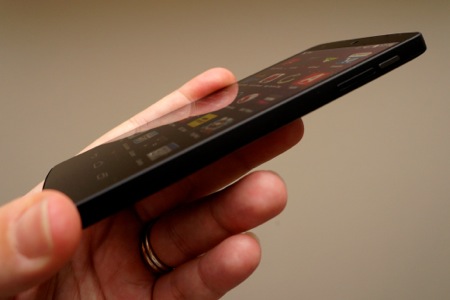 It's not totally devastating, though. For relatively little money you can invest in a wireless charging plate and keep the phone topped up whenever you put it down. There are in-car cradles with wireless charging, and even portable chargers.

Nevertheless, Google should have opted for a larger battery even if it had put a few more cents on the build price. You can survive a whole day by taking the usual precautions (turning down the screen brightness for one), but you shouldn't need to. 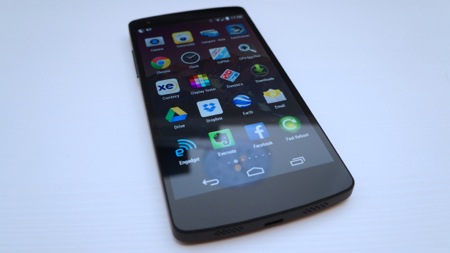 The biggest benefit of buying a Nexus phone is the assurance of regular and timely updates, plus a fantastic bang for your buck.

Google has managed this with the Nexus 5, although it's not quite the same bargain as the Nexus 4, and it's unfortunate that the battery only got a minor increase in capacity.

This isn't a deal-breaker, since there are ways to manage the battery. Even if you need to invest in a portable charger, you'll still be quids in, and you'll also be safe in the knowledge that your phone will be supported for at least 18 months.

Google once again brings the best of Android at a more affordable price than its competitors
By Jonathan Morris
| Dec 17, 2013 |
Mobile