Augment yourself: Tips and tricks for Deus Ex: The Fall on iPhone and iPad

Expert advice and the best augmentations

Deus Ex: The Fall hard man Ben Saxon might be an ex-SAS, ex-mercenary, ex-Tyrant tough nut, but don't expect this mobile spin-off to be a walk in the park.

Uncovering super secret conspiracies is a tricky job, after all.

So we've put together this guide, which will offer up some tips to help you turn the tide in combat, sneak by guards unnoticed, and spend your limited cash reserves wisely.

Plus, we'll tell you which augmentations to choose, and which to avoid, so you'll come out the other end as a mechanised Robocop super-soldier, and not an electric lemon.

Got any advice of your own? Leave it in the comments below.

You don't have to fight everyone. Sometimes the best tactic is to save your ammo and energy and just sneak past your foes. This is a strategy that's especially worth employing if you're hopelessly outnumbered. 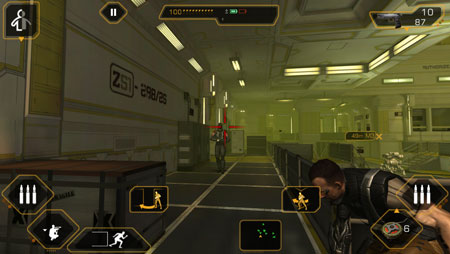 Always roll between cover points if there's an enemy in sight. You'll be completely invisible (even through you're cartwheeling around the level like a loon), and can use this to sneak around the battlefield like an especially acrobatic ninja.

You can save your game at any time. You might want to save your progress before a big fight or a tricky hack. Just don't do what I did and save your game while you're in the middle of being riddled with bullets.

Always use stun takedowns. The body will still disappear, as though dead, but you'll make no noise and get more experience points. I literally don't know why you'd ever use a lethal takedown. 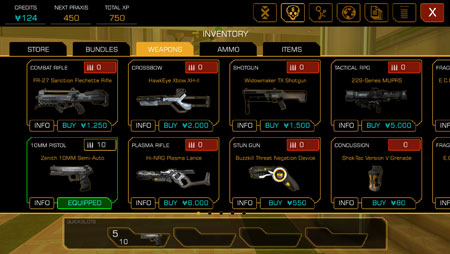 You really need to spend credits wisely. You just don't come across much money in the wild, and big ticket items like weapons and silencers will chew through your cash reserves. We recommend investing in a crossbow, some auto-hack gizmos, and upgrades for your favourite guns.

Sadly, those handy pistol headshots will stop being effective when you go up against armoured goons. Even with the armour-piercing upgrade, the heavily armoured enemies in the latter portion of the game will not go down with a single headshot.

Always pick up eBooks. Even if you're not interested in reading them, you'll definitely appreciate the 150 experience points. 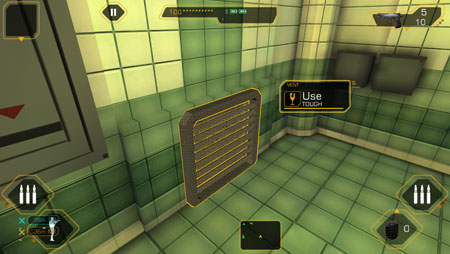 There's almost always an alternative route through each combat arena. Look for vents and ducts, hackable doors, and other hidden paths. These will lead to useful items and can help you bypass or flank enemies.

Don't just hack doors as soon you see them. You might be able to find a pocket secretary lying around with the four-digit code on it.

Watch the countdown timer while hacking. If that thing hits zero, it will set off an alarm and alert every enemy in the postcode to your current location. Instead, always pull out of the hacking mini-game before the countdown finishes.

When you earn enough experience points, you'll level up and earn a praxis point. These are used to unlock augmentations, which give you handy new skills like wall-penetrating sight, improved hacking skills, and invisible skin.

Some are better than others. Here are the upgrades that we would recommend. 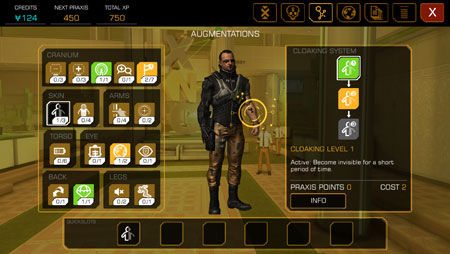 Cranium - You don't want to be locked out of a good alternative route because your hacking skills are too limited. Definitely invest in at least capture levels two and three to ensure you can get through most doors and into most terminals.

Also, grab robot domination once you're inside the XNG Data Center. Being able to make turrets and robots fight for you (by flicking the relevant switch on a nearby security terminal) will prove to be rather handy.

Don't waste Praxis kits on hacking stealth and fortify, though. Better to just try the hacking mini-game a few times than spend your very valuable points in these categories.

Social enhancer is handy for making conversations go your way, but at two praxis points it's too expensive. 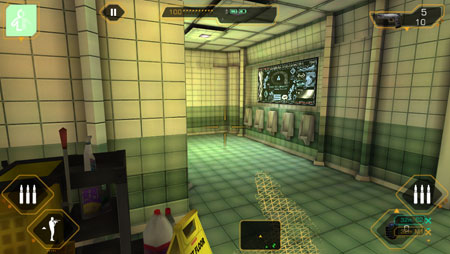 Skin - The cloaking system is a very handy way to sneak by bad guys unnoticed. It runs out of juice quickly, though, so consider upgrading to level two to decrease its power consumption.

The armour upgrades are going to come in handy for those who want to play the game as an action-heavy first-person shooter, but stealth fans (i.e., people who know how to play the game properly) won't need them.

Arms - Being able to move heavy objects can come in handy, as it opens up lots of really good shortcuts and alternative routes. Some of the game's best paths are hidden behind heavy crates, so consider getting this upgrade soon.

You might want to get the upgrade that lets you punch through walls, but remember that it will alert any nearby guards so it's not a great way to create shortcuts when being all sneaky like.

Torso - Having more energy cells and a faster recharge rate will definitely come in handy if you like using active augmentations and take-down moves, but these upgrades are very costly. I got through the game without them - I'm sure you can too. 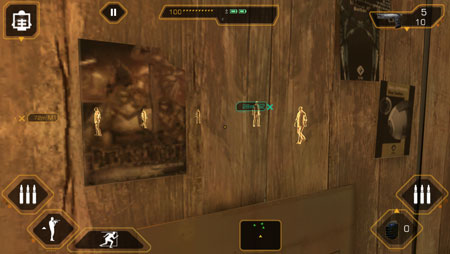 Eye - The wall-penetrating imager is a very handy tool for stealth players. Turn this on for a few seconds and you'll see ghostly outlines of all patrolling guards, including which way they're facing. Use this to plan your next move.

Upgrading your radar to level two is advisable, as you always want to have as much information as possible before you make your next move.

The flash suppressant sounds like fun, but as a stealthy player I never had a single concussion grenade thrown at me during the game, so you can probably go without.

Back - The multiple take-down augmentation is expensive and rarely comes into use, but you'll thank your lucky stars you have it when the opportunity comes.

Being able to sneak into a room and defeat two nearby guards in one move (while only using one energy cell) is very handy.

Legs - The ability to run silently is useful, especially when mixed with the cloaking system. It also means that you don't need to move around every level in a crab-like crouch.

The stealth dash might come in handy, but it's expensive and never very necessary.

Silver Award-winning cyberpunk shooty game Deus Ex: The Fall is on sale for 99p/99c on iOS and Android until Monday