According to the maker of the diary, the world inside Galaxy on Fire - Alliances is extremely important. This is why Fishlabs doesn't want to present it to players as a "two-dimensional chart with a couple of markers".

Fishlabs would rather give players a "strong and convincing" impression of the enormous size of its MMO's galaxy, which is why Galaxy on Fire - Alliances will feature a "multi-layered" Star Map.

Using this Star Map, you'll be able to jump from the surface of a planet to the star system it resides in, and then - from there - explore the entire galaxy.

You'll also be able to manoeuvre your fleet into tactical positions, govern your territory, plan your next move, and get a clear view of the distribution of the many forces under your command. 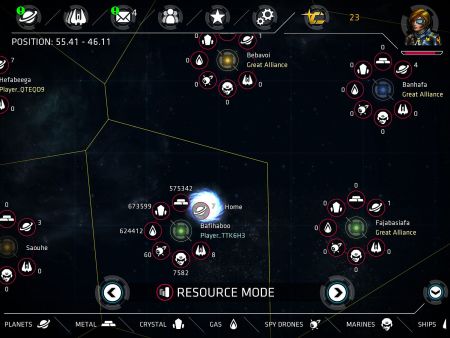 The first map you'll see when you tap on the in-game 'Star Map' button is the Diplomacy Map, which is perhaps the most important map of them all.

The Star Map features other maps and modes, too.

There's a Colonzation Map, for example, which will show you the quality of the star systems that are under your control. There are also Fleet, Owner, and Resource maps and modes that give you an in-depth look at your overall progress.

You'll be able to check out the full developer diary for yourself on Fishlabs's official blog from tomorrow. In the meantime, check out the exclusive Galaxy on Fire - Alliances screenshot at the top of this article.