When Motorola launched its 'Life proof' mobile phone last year, it quickly proved its worth when I exposed it to the elements of a cold Swedish winter, and later an extremely wet holiday to the Lake District.

The original Defy wasn't designed to be dropped off a roof by a builder, but it was designed to cope with knocks, puddles, and baths. The strong Gorilla Glass also worked to keep the phone display looking as good as new. 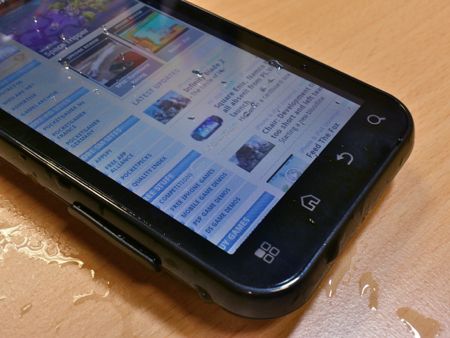 Why am I writing about the old phone when this is a review of a new model? Well, it's quite simple: the Defy+ is in fact the same phone with just a few changes on the inside.

Motorola recently got into trouble for making claims about just how rugged the Defy was, but the phone is still considerably stronger than an ordinary smartphone. Just don't go throwing it under a bus, or trying to smash it into a concrete wall, and you should be just fine.

This time around, Motorola has given the phone a speed boost with a new processor, clocked at 1GHz instead of 800MHz, and also upgraded the OS to Android 2.3.

The original Defy shipped with Android 2.1 and only got 2.2 in the summer, much to the annoyance of early customers who felt the wait was somewhat excessive. Sadly, Motorola has decided not to upgrade the Defy beyond 2.2, which means the Defy+ is the only way you're gong to get Gingerbread, or a possible update to Android 4 (Ice Cream Sandwich) in 2012. 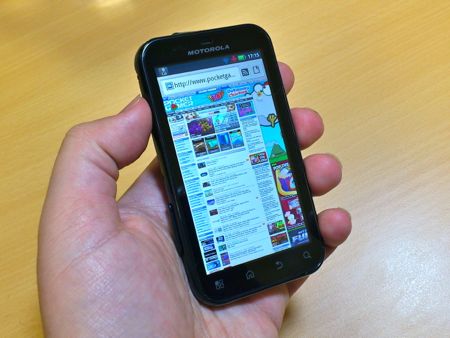 When it comes to high-definition displays, nothing yet beats the Apple iPhone 4/4S or the Samsung Galaxy Nexus, but the Defy+ is not far behind with a 854x480-pixel screen crammed into a relatively small 3.7-inch frame.

What you have with the Defy+ is a screen that looks pin-sharp, with a decent brightness level and good colours, but it's still large enough to make it possible to enter text on a portrait QWERTY keyboard, although rotating to landscape makes things easier still.

At a time when many phones are becoming razor-thin, the Defy+ almost feels chunky, even if it isn't actually that thick at just 13.4mm. With the reduced height and width of many smartphones on sale today, it's a lot easier to slip into a pocket or bag on a night out.

When you do throw it in your pocket, you can set the phone to use the proximity sensor to automatically go into standby. It can even tell the difference between having the screen covered by your pocket and brushing your hand over the sensor at the top of the screen.

On the back of the Defy+ is the same camera as the original, which means it's just five megapixels and with a single LED flash. Can five megapixels cut it these days? Well, the camera on the original Defy was acceptable, but it did take rather washed-out pictures – at least when viewed back on the phone itself. 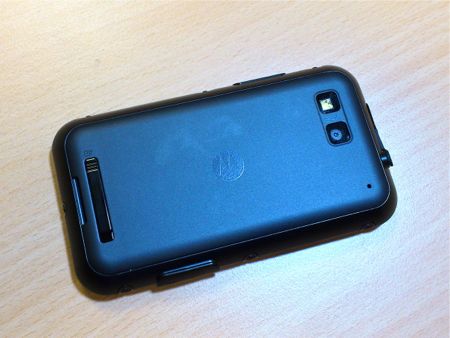 The Defy+ has the same sensor, and so the photos are the same. Despite the speed boost, you can still only capture video at VGA (640x480-pixel) resolution. The phone records movies at a decent bitrate, so the videos will still be perfectly watchable and are very smooth, but many will still balk at something that can't capture at least 720p HD video.

There's no HD output and no camera button. But there is a menu setting that allows you to launch the camera by double-tapping the home key, which means it can be launched at any time – even when you're in another app.

If you don't need the camera much, the double-tap system can be set to fire up other applications instead. It's very useful, unless you accidentally launch an app because you tapped the home key twice by mistake. 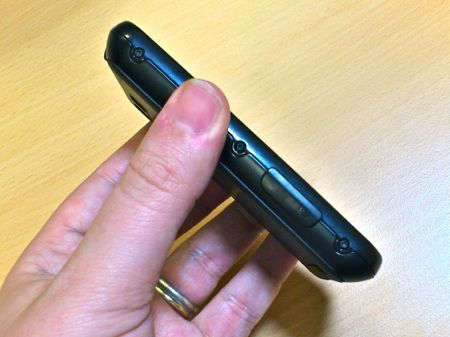 Motorola's Motoblur software gets quite a bad rap for being perceived as bloatware, but if you actually take the time to set it up it offers many benefits.

Once you create your account, you also get the added benefit of being able to remotely track your phone and wipe your data if it falls into the wrong hands. But, under most circumstances, the things you'll like MotoBlur for most is being able to collect new emails, Tweets, Facebook updates and more – all within a single app (as well as backing the data up for restoring on a replacement phone).

That's not a unique service by any means, but a key difference is how Motorola collects all of that content from its own servers in the background. The data is then stripped down and compressed before being sent to your phone in one go. It not only has the potential to speed things up, but it also reduces the data needed to receive updates.

If you've got a limit on mobile data, it's a great feature. It's a service that's liked by the network operators, too, for obvious reasons - it lessens the burden on the network.

Motoblur isn't absolutely perfect, as it can sometimes take a while to receive new content that you could pick up straight away if using the standalone app for Facebook, Twitter, or LinkedIn, but for the most part it's worth having and making the effort to setup.

There's plenty of room to store apps on the Defy+, compared to the rather measly 380MB on Sony Ericsson Xperia models. There's almost 1.5GB of free space for your apps, and beyond that you can install many apps to an SD card. Motorola bundles a 2GB card in the box, but you can go up to 32GB if you want.

With plenty of app storage space, Motorola has opted to fill the phone with some apps that you may or may wish to use, but nothing major. There's a 7Digital music store app and CardioTrainer, which runs constantly in the background to record calories burned as you perform various exercises, from walking, running, boxing to yard work.

The phone doesn't come with support for the recently launched Motocast app, which lets you access media from a home or work PC. Nor is it available to download from Android Market. As this phone was announced before the likes of the Motorola RAZR and the two new Xoom 2 tablets, it seems Motorola has excluded it.

Some people complained that the original Defy didn't perform well in the battery department, but I never found this to be a problem. In fact, compared to a lot of smartphones, the Defy+ does very well thanks to its above average 1,700 mAh battery.

Additional battery management options let you go a step further by turning off background data synchronisation during the night, or allowing you to adjust the brightness level at certain times of the day.

You also get built-in data management that can restrict apps to communicating only over wi-fi, if you want to cut down on mobile data usage in addition to the benefits of Motoblur as I already mentioned.

The GPS is also pretty sensitive, which proved so valuable with the old model when using the phone to navigate public footpaths and walks in the Lake District. Coupled with the ability to use the phone as normal even during torrential rain, the Defy+ should be absolutely no different.

The only thing to be aware of is that when the screen is wet the touchscreen can become less responsive or not work at all. It isn't broken, but merely needs you to quickly wipe the screen dry.

If you need to use the phone when it's getting a real soaking, the Sony Ericsson Xperia active is designed to work even when wet – but you'll wind up with a phone that has a lower resolution screen.

Should you be in the market for a phone that can cope with the thrills and spills of modern life, or you're just downright clumsy, the Defy+ is a great phone that doesn't mean compromising on power or performance to get something strong and rugged. 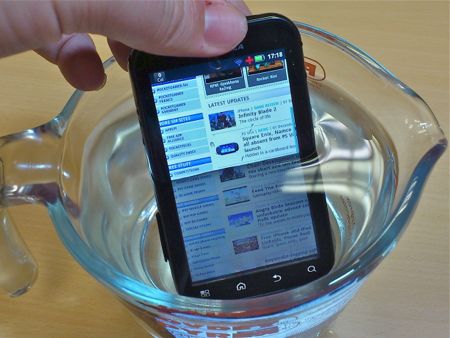 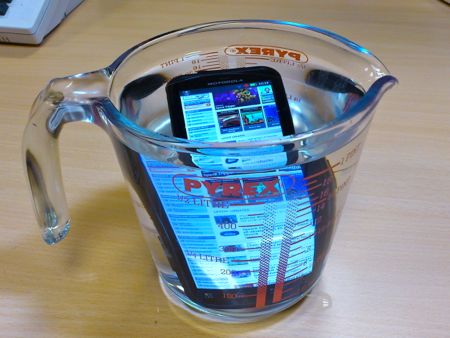 The speed increase doesn't make an incredible difference, as the original Defy was still very quick and had a decent amount of memory and storage space for applications. If you can still find one on sale, the original model should save you a fair few quid and it won't look any different at all.

However, if you want a newer version of Android, the Defy+ is the only choice unless you're happy to go hacking the old model. If you are happy to do that, however, you'll basically get a Defy+ at the end of it. With the ability to overclock, you can happily take the original Defy up to 1GHz, or even higher still.

But for anyone who doesn't want to get involved with hacking, the Defy+ does bring some improvements without any fuss. If you're someone who has an active outdoor lifestyle, it has to be better to buy this than take risks with an ordinary phone that could leave you with a costly repair bill.

The Defy+ is a phone for anyone that just can't manage to look after an ordinary phone. This phone can cope with bumps, scrapes and spills – and yet still manages to perform as a fairly high-end smartphone at the same time. But, it isn't a huge improvement over the older, cheaper Defy if you can find one.
By Jonathan Morris
| Dec 2, 2011 |
Mobile
SEE COMMENTS

Motorola's Defy+ handset making its way to the UK next month