There's something rather perverse about HP's TouchPad.

In the run-up to the launch of the original iPad, critics slammed the device for being little more than a 'large iPhone' – an allegation it would only later overcome through the sheer weight of its popularity with the public.

That supposed weakness, however, is undoubtedly the TouchPad's greatest strength: the overriding feeling after an extended session with HP's debut tablet is that it's best described as a 'Palm Pre Plus'.

In other words, the TouchPad takes all of the best elements of its smaller cousin and runs with them.

It neither pulls off anything revolutionary, nor is it blessed with a definitive 'game-changing' feature, but when the OS behind it makes even the simplest of actions a genuine joy, none of that seems to matter. 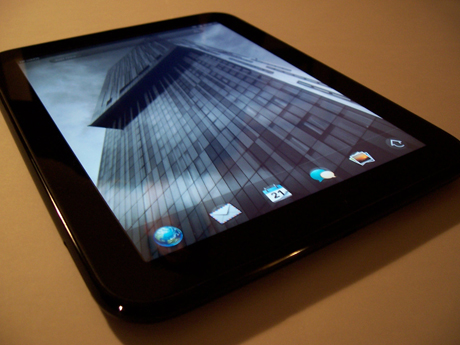 As unique as the webOS software might be, the inspiration behind the design of the TouchPad's hardware is clearly Apple's all-conquering tablet. Unfortunately, the iPad model HP has elected to work from is the original device, rather than its now four-month-old successor.

As such, there's much about TouchPad's physical form that already feels 'last gen'.

Though equipped with a front-facing camera (the tablet comes with built-in support for video calls over Skype), the TouchPad doesn't rock one on the back, leaving it out of step with the likes of Motorola's Xoom, Samsung's forthcoming Galaxy Tab 10.1 and, of course, Apple's iPad 2.

In terms of its presentation, however, the TouchPad makes a solid play for the crown of best looking non-iPad tablet on the market.

The device's shiny black finish echoes the current breed of HD devices on the market (mirroring the design of the majority of TV sets and home consoles), while the weight and thickness of the TouchPad - the rim measures 13.7mm to the iPad 2's 8.8mm - arguably give it an advantage over much of the pack when trying to maintain a comfortable grip.

The TouchPad's curved back means it sits perfectly in your palm without budging (even during particularly bumpy train journeys), allaying any fears over its slippery surface. 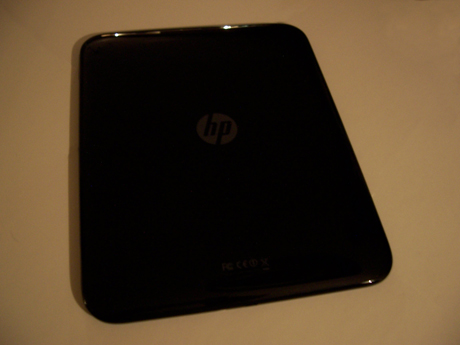 On other scores, TouchPad is happy to toe the Apple line: the device's battery life is definitely in the same league, with one full charge lasting the best part of three days.

Also, both the TouchPad's 9.7-inch screen and the resolution it supports (1024x768 display) are identical to the iPad 2's. On a visual basis, this means the only differentiating factor between the two devices is the comparative quality of their operating systems.

This is one area where, in particular, HP's tablet is able to shine.

Unlike Android, which has to be tweaked and reconfigured to accommodate a larger screen, webOS 3.0 appears, at least on the surface, almost indistinguishable from its predecessor, as sported on the recently released Palm Pre 2.

Likewise, when it comes to the platform's gesture controls, it'd be easy to deduce that webOS had been designed to run on tablets from the get-go.

Upon startup, the main dashboard is left clean, with shortcuts to standard programs – email client, web browser, chat system, calendar, and photos - lined up neatly in a bar along the bottom.

What this allows webOS to do is utilise the vast space in the middle to deliver its trump card: multitasking. 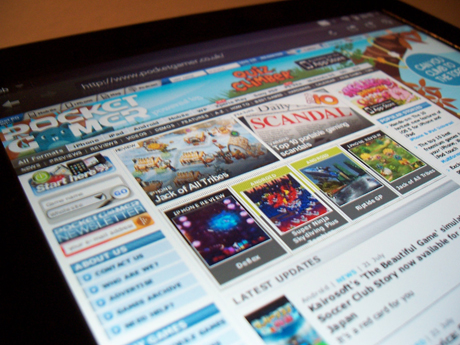 Apps are hidden behind an arrow icon in the bottom right of the screen, with each one automatically loading up in full-screen mode.

Any action taken within an app - such as clicking a web link or opening up a fresh email - generates a neat stack of related programs, making it possible to flick between them and dismiss them without any additional button presses or fiddly menu systems.

This distinctively webOS approach makes switching between a video on YouTube (the TouchPad offers full Flash support, too) and a game of Angry Birds HD as effortless as it is satisfying. 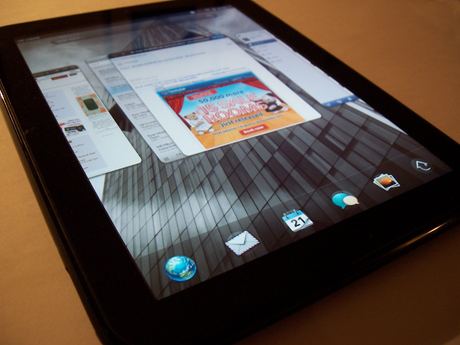 Another area in which HP has instilled a sense of distinction in the TouchPad is in its integration with various social networks.

Like the range of Windows Phones before it, the TouchPad has elements of Facebook built into its framework. Contacts, for example, are lifted directly from the network and merged with those from your email accounts or Palm Pre handset (should you own one).

Facebook photos are similarly synced with those stored on the device, while those saved on the social network can be viewed on the device without having to load up the Facebook app itself.

The device's music player (which links up with HP Play – a syncing program for Windows that pools its library directly from iTunes), meanwhile, sports Beats Audio – HP's patented sound technology produced in conjunction with Dr. Dre and designed to "play music as it's meant to be played". 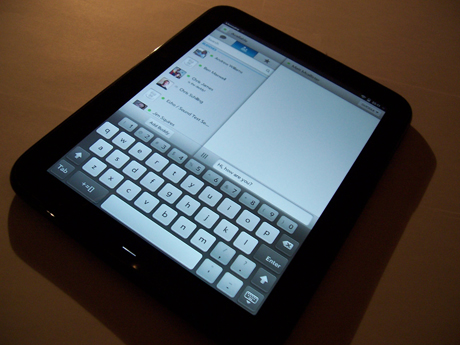 Nevertheless, it's just as well the TouchPad's preinstalled library of apps is so resolute, given HP's App Catalog is undoubtedly the tablet's weak point.

The App Catalog has much in common with Windows Phone Marketplace when it first launched, split between well realised apps from major partners – the exclusive TouchPad Facebook app of most note – and a slew of 'amateur' efforts that appear to serve only their creators.

The suite is, surprisingly, well stocked with games, mind: in addition to both Angry Birds HD and Angry Birds Rio HD (the first available in full, without ads, for free), the likes of Gameloft, Hexage, and 10tons ensure there's a rounded base of titles made specifically for the TouchPad.

Standard webOS 2.0 efforts are also available, though they naturally run in a small screen delivered in the centre of the display.

Of course, the TouchPad's well-designed library can't yet compete with either the iPad's App Store or the Android Market in both volume and range, but there are already enough games on offer to suggest the platform will benefit from a steady, if not spectacular, flow of releases in the months to come. 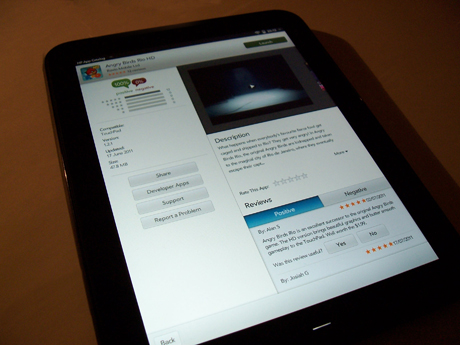 However, it's these very apps – or, rather, the comparative lack of them – that ultimately determines just which brand of user HP's effort appeals to.

As with the range of Android tablets on the market, an attempt to bill the TouchPad as an 'iPad killer' would be misleading. Those looking for the full iOS experience (and the 425,000 apps on board the Apple ship) are unlikely to be swayed by anything HP's platform has to offer.

That said, for those with no affiliation to any particular platform, it's hard not to push the TouchPad forward as the tablet of choice.

In webOS 3.0, HP has delivered a backbone for the device that surpasses Android in terms of sophistication and rivals iOS when it comes to intuitiveness. 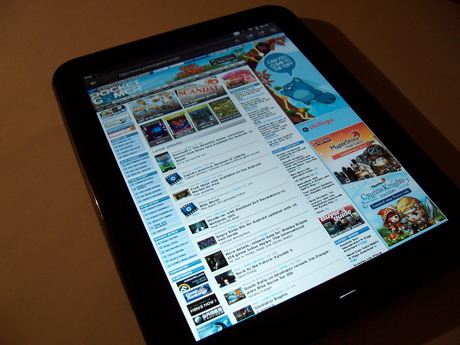 Importantly, the TouchPad feels like a quality product, both in terms of its physical form and the platform it supports. In particular, webOS's series of gesture controls are both elegant and purposeful, and tap into exactly what tablets are all about: ease of use.

On that score, the TouchPad leads the line. Yes, there are features missing from this first-generation release - a camera on the back the most obvious – and HP's App Catalog sports little to make its rivals jealous, but webOS 3.0's status as the most tablet-friendly OS to date is undeniable.

The TouchPad - like the iPad before it - may well be little more than a large smartphone, but a minute or two's play with HP's latest suggests that's anything but a sore point.

HP's TouchPad is no app powerhouse, but the strength of webOS 3.0 ensures it's able to outpace iOS in key areas, delivering a slick and sleek user experience
By Keith Andrew
| Jul 22, 2011 |
Mobile
SEE COMMENTS

Gameloft puts Asphalt 5 on sale at 69p/99c, alongside Brothers In Arms 2 and Hero of Sparta 2