A mad king. Terrifying creatures born from madness that stalk the land. And a hearty band of heroes that are doing their utmost to fight back against the corruption that is destroying their homes.

It's fair to say that Armello has a pretty epic storyline. And it's backed up by some super slick presentation. This is one of the best looking digital board gmaes you're ever likely to see, with gorgeous animation and a lush, verdant world to explore.

But underneath all of that there's an interesting and intelligent experience that's likely to have you hunched over your mobile for hours on end.

The king is dead

The game sees you choosing a representative of one of four different factions. Each of these characters has its own slightly different play style, but the aim is still the same - try and become the next king or queen.

If you've played the likes of Talisman then you know what to expect here. Complete quests, gain prestige, and try and hamper the other players as you explore the game board.

There are plenty of different ideas in play here. You've got a deck of cards you can use, as well as dice that are used to determine the outcome of the fights. Everything is explained in a neat tutorial that introduces you to the plot as well. 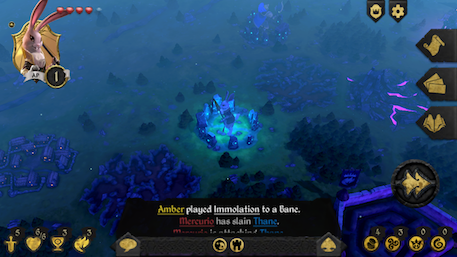 Not that the plot is really that important here. Instead what's important is the finely balanced risk and reward the game offers up. You need to get stronger and more influential, but often that's going to mean putting yourself in harm's way.

Even when you're playing solo you need to keep a close eye on the other factions. Sometimes you can make alliances, but often you need to take them out or hamper them before they get too much of a lead.

Death isn't the end here, it just sends you back to your starting space, a little worse off and hopefully a little wiser.

The king is mad

Armello isn't without its problems though. The quests you're performing can get repetitive, and the thrill of playing with other real people isn't quite captured when you're trying to defeat the AI.

The free to play mechanics here aren't too annoying though, and while they can change the game, they never block you from playing, which is a very good thing.

In terms of polish then, Armello is definitely up there with the best of them. But if you're not a fan of the fantasy board game genre, there's not much here beyond the sheen that's going to convince you otherwise.

There are a few niggles here and there, but if you love your board games fantastical and polished, you're going to love Armello
Next Up :
Xiaomi 11T Pro review - "Pro in name, pro in nature"