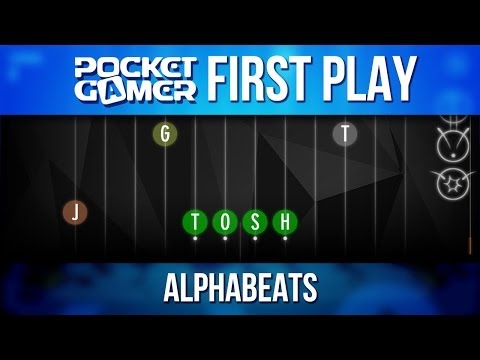 Alphabeats is described as Scrabble meets Dance Dance Revolution. Which, in terms of things that probably shouldn't go together, is like newborn baby meets hungry lion.

The idea is to spell out words by collecting up letters that plummet from the sky. With each added letter your word tray gets wider, making it harder and harder to dodge falling letters that will ruin your word.

Like most anagram games, your job is not just to make loads of words, but to make long ones and to use those rare letters like K and X.

The letters also drop to the beat of the background music. So leisurely tracks - like The New Formation by Fez composer Disasterpeace - are gently challenging, while manic music - like the soundtrack to Shove Pro - makes the game impossible.

You get five songs with the game, but you can by more in the in-game shop.

Alphabeats comes from Rad Dragon (which is Mike Sennott, Hyper Light Drifter designer Teddy Diefenbach, and some collaborators) and is out on iOS right now for £1.49 / $1.99.

Catch letters to make lyrics to the sweet music