I have been waiting for YIIK: A Post-Modern RPG for a long, long time. Announced years ago, with a demo released back in 2016, it has had a long, difficult development for a number of reasons, and I have watched it all unfold in real-time.

It's tough to review a game so close to my heart, because to do it justice, it needs to be fair. I have to ignore my desire to gloss over its issues and simply wax lyrical about the elements I love.

Because I honestly believe that YIIK is one of the most beautiful, soul-crushing games I've ever played. And it has its flaws - shaky combat, slow load times, and a painful levelling-up system - which I will take into account. But if you forgive its sins and embrace the good parts, it will stick with you for a very long time.

YIIK takes place in the tail-end of 1999 and follows the story of Alex, a 20-something hipster who's just moved home after graduating college. He's jobless, bored, and a bit of a layabout.

One day he follows a cat into an abandoned building, and becomes embroiled in an utterly bizarre story involving enormous, other-worldly creatures, vengeful souls, and a Korean woman who has apparently been ripped into another dimension from inside an elevator. 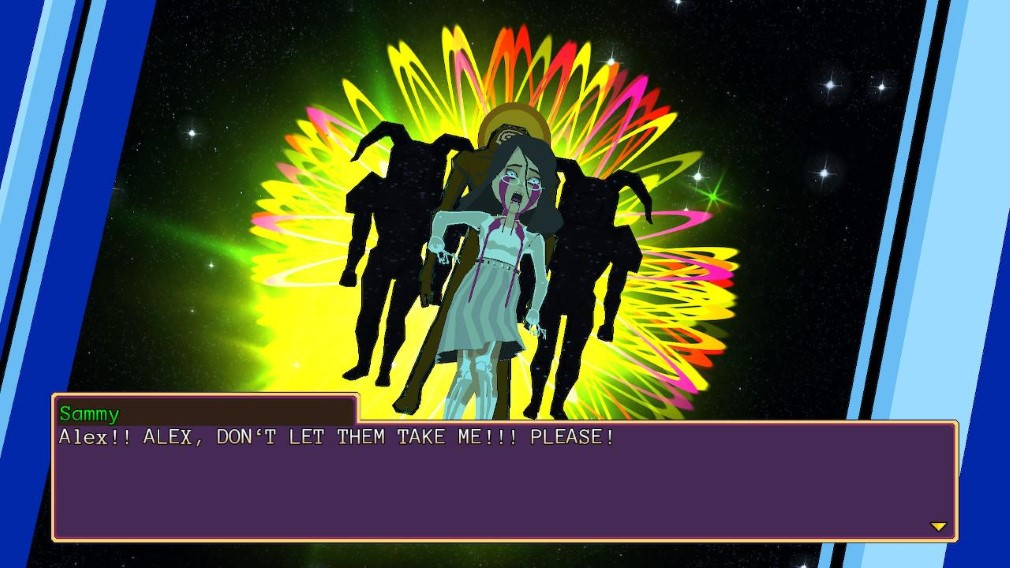 Along the way, you'll meet a colourful cast of misfits, including keen photographer Michael, depressed recluse Rory, misanthropic keyboardist Vella, and more, all of whom are deep, interesting characters with their own motivations and dreams.

With your party of weirdos, you have to navigate the overworld and dungeons of YIIK, smashing the heck out of enemies, gathering up items, and doing all the usual RPG stuff. But it's so much more than that.

So, let's get this out of the way first of all: combat is a bit hit-and-miss. The main gimmick of the game is that battles are made up of rhythm-based mini-games, much like you'd find in the Paper Mario series, with each character having their own mini-game to accompany their method of attack.

These are actually quite fun, and for the most part hit a sweet spot between pointlessly short and upsettingly long. Once you get the timings down, battles can move at a decent pace - especially if you make use of the ability to fast-forward the action whenever you choose.

The problem is that some of the timings are nigh-on impossible to hit. Sometimes it's because the video doesn't sync up with the audio, and you'll suddenly jump ahead of where you were supposed to hit. Other times, it's because you were just a fraction of a second out.

This is particularly prominent when playing in docked mode, where it's easier to see that sometimes, when you think you've landed in the right spot for an attack, the target will suddenly jump a bit further down the screen from where you hit.

You can work around this - learn to hit just before the target, and so on - but it still leads to some combat encounters dragging on just a little bit too long as you mess up again and again and only deal tiny amounts of damage each turn. 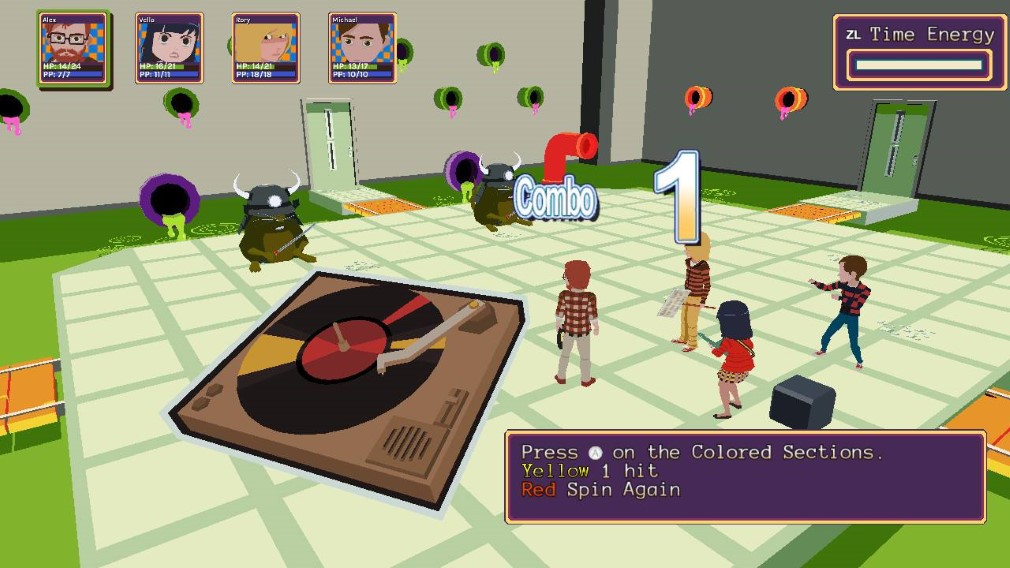 One thing you can't get past is the laborious levelling system. To level up, you must find a phone and enter your Mind Dungeon, a physical manifestation of Alex's mind full of doors which lead to stat buffs.

You can choose which buff goes behind which door, and at times you're given an additional buff to specific stats, which when stacked with the base buff leads to some huge numbers being added on.

But the actual practice of wandering through the Mind Dungeon, setting your stats to the doors, going in, reading a dialogue box, and doing it all over again three more times slows everything way down, and you'll end up relying on the auto-levelling more often than not.

And finally, the load times. Loading anything in YIIK takes far too long. Battles, new screens, working out which items you get at the end of a battle, whatever it is you're doing, you're going to be sat at a load screen for a long time.

Light at the end of the tunnel

These are, presumably, fixable problems. And the game's design does work around the issues - dungeons aren't flooded with enemies, and you only need 100 XP each time you want to level up, so these frustrations aren't happening too regularly. But they are there, and they need to be addressed.

Because YIIK, aside from these problems, is fantastic. Its soundtrack is magnificent. Its story toes a fine line between heart-wrenching and hilariously weird. Its characters feel real, in all their broken, horrible glory.

The heart of the game is the ONISM message boards, an old-school forum which you're welcome to trawl at any point in the game, reading along as people try to solve the mysteries of the game without your input.

It's a pitch-perfect representation of the early Internet, right down to its uncomfortable use of slurs and other problematic language. That can make for some hard reading at times, but it feels appropriate in its inappropriateness.

The world itself is also magnificent, resplendent with blocky 3D models, garish colours piercing your eyes at every turn, and plenty of NPCs willing to spill ridiculous dialogue as soon as you give them the time of day.

Everything feels slightly off, and not just because there's gigantic creatures looming over the skyline at night. There's just a general unease permeating the entire world, like something's going to explode at any minute - which is fitting, given the concerns around the Millennium Bug at the time. 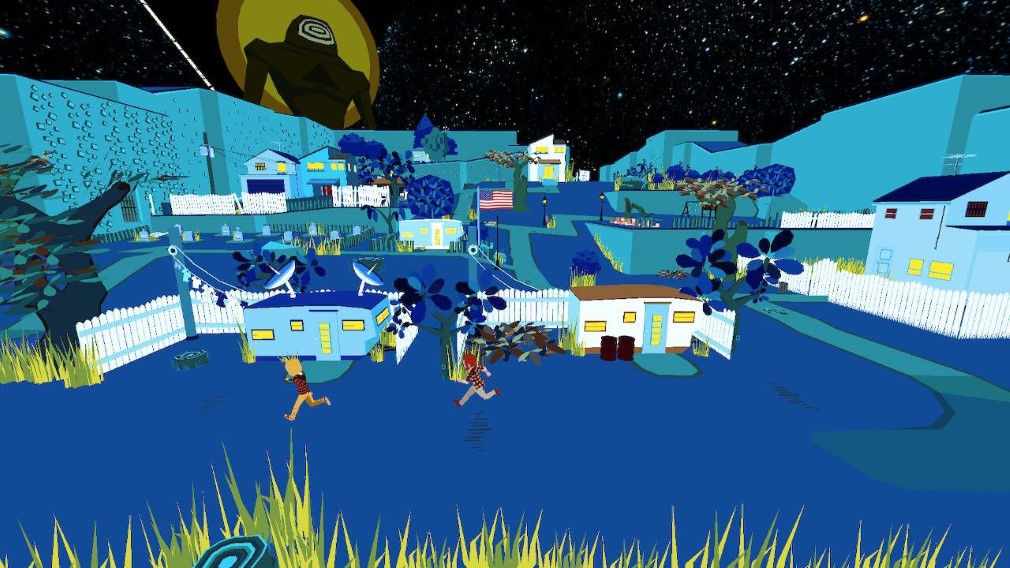 And the characters you play are brilliantly written, providing plenty of unique flavours to the mix. You'll easily find your favourites in the cast, and they all play off each other and work together to make up for the fact that Alex, the main man, is pretty much the worst character amongst them.

Not because he's a weak character, but because he hits a little too close to home for any white 20-something hipsters playing YIIK. He's quick to describe things in overly-flowery language, he's selfish and rude, he thinks he's better than other people because he has a degree. He wears check shirts and video game t-shirts. I hate him.

But the supporting cast, and the writing in general, make up for him. This may be a silly game on the surface, but at its heart is the darkest depression, the kind of sadness you spend your life trying to avoid, and it seeps out when you least expect it and trips you up when you think everything's going great.

In short, YIIK: A Post-Modern RPG is achingly beautiful. It mixes sadness and frivolity with ease, creating a natural-feeling world populated with weirdness and discomfort.

Its combat system could do with some tweaking, its load times need improving, and its levelling system needs throwing out entirely - I won't argue on those points.

But you can let these things slide, because the rest of the game is so wonderful. This is an experience that will hurt you emotionally, and you'll keep crawling back for more just to see how far the rabbit hole goes.

YIIK: A Post-Modern RPG has its flaws, but its magnificent story, soundtrack, and style are enough to paint over the cracks
Next Up :
Happy Game review: "Don't worry, be happy?"

YIIK: A Post-Modern RPG is an oddball JRPG headed to Switch next month