Credit where credit’s due: it’s not often that a video game franchise can survive for nearly 20 years without really changing.

Some of us are old enough to remember playing the original Worms on the Commodore Amiga way back in the '90s. The platform has changed, but the games look and feel virtually identical.

Except this isn’t the Worms game we know and love. Not exactly. After successfully porting Worms and Worms 2: Armageddon to the iOS platform - with some success, we might add - developer Team17 has tried its hand at a brand-new direction for the series: Worms Crazy Golf.

As titles go, it’s direct and to the point. The psychotic invertebrates are still wielding clubs, but this time it’s in the civilised environs of the local pitch and putt.

And they’re not attacking each other this time, or not directly at least. Instead, the goal is to putt a ball through a range of courses in as few strokes as possible.

Swing to the Beat

Of course, this being a Worms game, there’s no slavish adherence to real-world physics. You have to navigate the ball through various obstacles and pitfalls, using props such as cannons, magnets, and teleportation gateways to their advantage.

Oh, and if you accidentally hit a worm gardener with your ball, it'll blow itself up in retaliation, leaving a sandy bunker behind for your ball to languish in.

Controls are simple and turn-based. You drag your finger over the screen to determine the trajectory of your ball, and keep your fingers pressed down to determine velocity. The type of club you use will affect the precision of the stroke, and the game automatically selects this for you on the basis of where you are in relation to the green.

The same cartoon violence is still in evidence, as are the quirky sound effects and surreal landscapes. There are three 18-hole courses to play through (four on iPad), together with 15 challenge rounds, global leaderboards, and achievements.

It's an Earthworm, Jim

There’s a dizzying array of customisation options for your worm, paid for with the in-game currency, so you can kit it out with the nattiest gear and the more powerful clubs.

But fret not - Worms Crazy Golf doesn't use the dreaded freemium model: the in-game currency comes from collecting coins in the game, and you won’t have to pay a penny more than the asking price.

On the whole, it’s a astonishingly polished game, with hidden goodies that will take hours to discover. Team17 has obviously taken a look at the Angry Birds formula and attempted to build on that. And it has succeeded, up to a point.

The pace of the single-player mode can be pretty slow. Waiting for your worm to be repositioned before you can take your next swing is as fun as it sounds. But, Worms Crazy Golf is strongest when played in the multiplayer mode, against human opponents.

When you bring other players into the fray, using the pass-the-handset mode, Worms Crazy Golf starts to feel like the game that's lasted two decades without really needing to change. It may be golf, but it's also Worms. 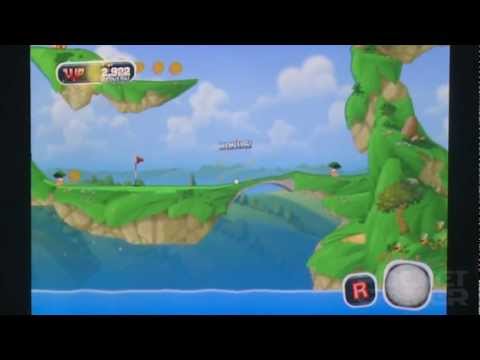 A remarkably generous offering from Team17. Fun, playable, and stuffed to bursting point with content
Next Up :
Netflix Oxenfree review - "Reading the signals of a thriller story"

Hands-on with Worms Crazy Golf for iPhone and iPad