Word Monsters is a puzzler that looks very familiar, but plays a little differently to you might initially expect.

In single-player you start off with a list of several word themes - basics such as "fruit", "animals", and "in the home". Once you pick one, you'll be dropped in front of stacks of letters, with each one making up part of one of your chosen theme's words.

In 60 seconds you'll have to run a finger across each word you find, which makes a satisfying biscuity crunch and then clears the word from the grid, hopefully dropping letters that allow you to make more words to fit the theme.

The game becomes jarring as soon as you realise that some levels can be played "incorrectly". Even though each level appears to be randomised, picking words in a different order from the one you're supposed to can lead to an "out of words" message popping up, resulting in a game over. 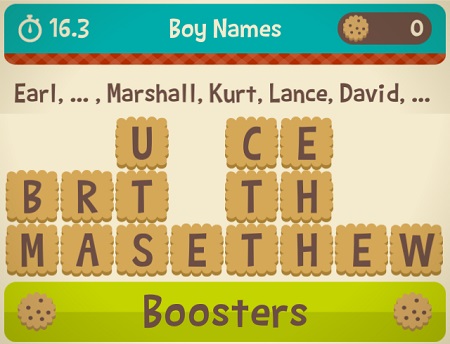 It's even more irritating when you select a word that you believe should fit the chosen theme only to be informed that it's, "not one of the words".

Okay, I may be pushing it a little when I try to enter "Kyary" for the girl names set, but for names like "Dale", "Chad", and "Codey" to not work in the boy's names category is infuriating, particularly against the clock.

There are two forms of in-game currency - coins and cookies. Both can be used for unlocking extra word themes and monster customisations. Cookies can also be used for cheeky in-game boosters - hints, freezing time, combos, and even restarting failed league games.

Coins can be earned through online play - roughly three to five per round - while cookies are much more difficult to obtain. You amass these through achievements, winning the weekly league, or once a day from the baking tray on the title screen if you're lucky.

If you're interested in customising and dressing up your monster avatar there's plenty to do. Some outfits can be unlocked via achievements, but for the most part you'll have to dole out cookies or coins to get the customisations you're after.

Getting in the zone is key to playing Word Monsters, and the single-player mode is the best place for it. To achieve three-star ratings across the bronze, silver, and gold difficulties you must clear each level in under 15 seconds - no easy feat. 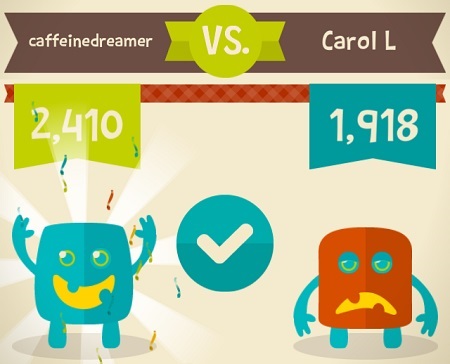 I told you listening to all that '80s music would pay off one day, mum

Playing online, either in league games or against random opponents, sees you competing in five rounds against your adversary. You choose either two or three of the word themes, allowing you to gain the upper hand by picking a theme you're comfortable with - "80s hits" being my favourite - but leaving you in trouble if your opponent chooses "golfing terms" or "classical composers".

While the game has ads, they are unintrusive and actually quite attractive, promoting other Rovio Stars games and updates rather than shoes.

With an unforgiving system that will make or break the game for you, Word Monsters is tough to recommend to everyone. If nothing else, it's a nifty puzzler that requires sharp eyes, fast fingers, and a decent memory.

If you're happy to play by its rules, Word Monsters is a polished puzzler packed with content that'll keep you busy for a week or two
Next Up :
Xiaomi 11T Pro review - "Pro in name, pro in nature"