"What are words worth?" asked Tom Tom Club in their 1981 single, Wordy Rappinghood.

As someone who struggles to make a living out of them, I'd be inclined to answer, "not a lot."

In Word Explorer, though, words appear to be worth a comprehensive and unusually educational trip around the world. 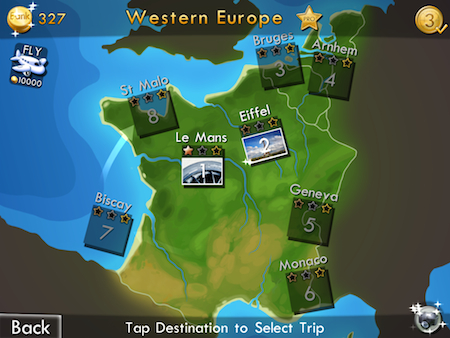 Perform well and you'll get a crack at bronze, silver, and maybe even gold bonus star questions

Word Explorer is a very simple game of anagrams set out on a sprawling world map. As you tackle each area of each country (this is a truly vast game), you'll be led around a crossword-like route of interconnecting words.

Somewhat disappointingly, there's no real strategy or wider meta-game to these wordy webs. They're simply a way to set up the next anagram clue.

These take the form of a jumbled line of letters, each of which must be dragged from left to right to form the correct word in response to a simple clue.

These clues often play on the dual meanings of words, and they're often quite creative and lenient in their adoption of slang terms. There's also the odd obscure seabird that will knock you for six, which is where the game's hint system comes into play. 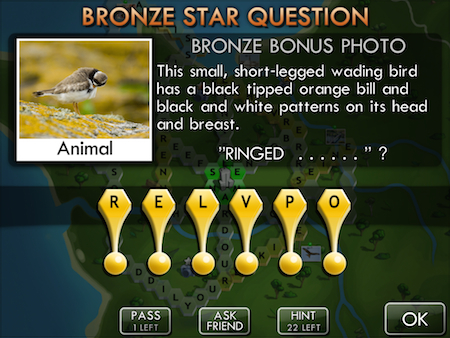 It's enjoyable moving around Word Explorer's geographically correct maps, completing each stage by solving all the words that contribute a letter to the final city.

I also enjoyed the odd picture rounds that give you a high definition image of a city, animal, or some other thing as part of the clue (and the reward).

It should be noted that I never once felt compelled to view these collected images again, but that doesn't matter. Word Explorer is all about the pleasant, linear journey to completion.

Of course, the fact that Word Explorer doesn't really develop or change at all can get a little wearing. 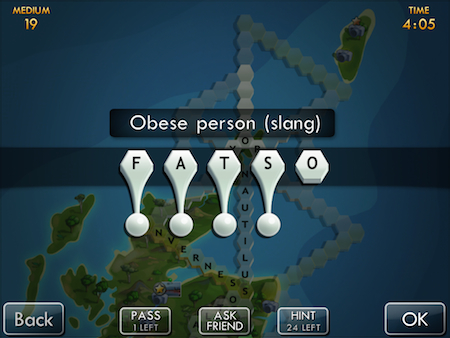 Sticks and stones may break my bones, but names...*sob*

Yes, there are coins to earn and levels to climb in order to enable travel to new regions, but ultimately that just means more simplistic anagrams - just with a different (and jauntily stereotypical) background ditty and some questions that are angled towards your new environment.

There is also a multiplayer mode, but despite several tries at auto-matching across a couple of days, I was unable to get a game. Whether this is an issue with the mode itself or a simple lack of players, I'm not sure.

Word Explorer is the kind of gentle and generous casual treat that has the potential to keep word game fans picking away for weeks. Whether they'll be able to maintain the level of interest required to see a whole world's worth of words, well, that's another matter.

Word Explorer is a generously proportioned word puzzler, but its core anagram-based gameplay isn't quite involved or varied enough to support the sheer weight of content
Next Up :
REDMAGIC 8 Pro review - "A beast in performance, but not without growing pains"