There are plenty of card games on mobile that try and ape what Hearthstone has done. They offer hefty experiences that can look pretty intimidating if you don't have a clue what you're supposed to be doing.

Warhammer Age of Sigmar: Champions is different. Not just in its scope, but in pretty much everything that it does. Sure, there are cards and fantasy heroes and villains, but there's a different feel to almost every aspect of the game.

And that's no bad thing. This is the sort of game that could easily sit on a homescreen alongside one of the bigger card games out there, and you might find it becoming your go-to card experience sooner rather than later.

The first thing you're going to notice that's different about AoS: Champions is the way the game is laid out. Essentially it's split into four lanes. Each of these lanes is controlled by a champion. Then you've got your own health bar. The first bar to hit zero loses.

You lay the champions as your first move, and from there the two players take it in turns to put units, spells, and actions into their lanes. There's no mana cost here, but you can only play two cards in one turn.

The draw mechanic is interesting too. The action slots you've got are also potential cards come the end of your turn. Use all of your actions and you won't get any new cards this turn, so you need to balance attack and forward planning. 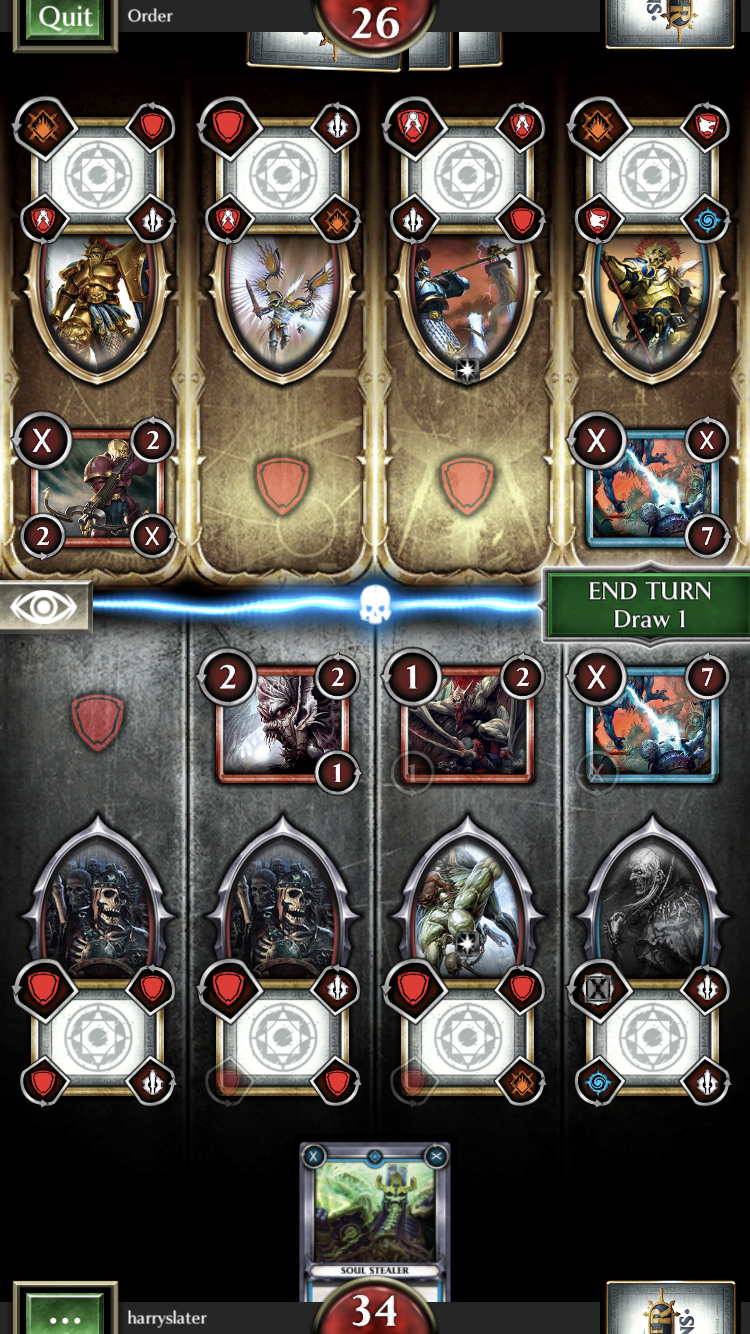 Then there's the twisting mechanic. The units and spells you play have different numbers and symbols on the corner of their cards. Every turn they perform an action, they're twisted around. Some cards attack multiple times, some just throw out one powerful attack after a hefty build up.

Each game also sees you trying to complete a set of challenges for your champions. Smash these in and the champion in question will become more powerful or drop a new move into play. You unlock different decks as you play, and each of them adds new twists to the formula.

Wahammer Age of Sigmar: Champions understands that the best card games have simple rule sets that are bent out of shape by the cards themselves, and that knowledge shines through in pretty much everything it does.

Not only does the game offer up plenty of chances for experimentation when it comes to play, new players are unlikely to get mullered within the first few seconds of loading up the game. Everything feels neatly balanced, with games ebbing and flowing in unique ways.

Warhammer Age of Sigmar: Champions is one of the first big card games in a long while that we've seen doing something different. It's fast and fluid, sure, but don't go thinking that this is a throw-away game. There's depth aplenty here too.

A card game that doesn't follow the usual formula, and comes up with something special in the process
Next Up :
Hindsight review - "Deeply emotional but a tad repetitive"

The best digital board games for mobile September 2018

The best hints and tips for Warhammer Age of Sigmar: Champions for mobile