Warhammer 40,000: Carnage isn't quite what you expect. Yes, you're a stompy whompy Space Marine throwing down with a horde of screaming Orks, but the titular carnage never really rears its head.

It's a far more measured game than that - one that takes points away from you when you sully the Emperor's name by losing hit points, and which lets you tinker around with your Astartes with almost WoW levels of number-juggling precision.

Its Gothic futuristic violence comes in short, sharp, grind-ish bursts before you're whisked away to the armoury to polish your pauldrons and add some extra oomph to your Storm Bolter.

Of course, there's oodles of Games Workshop gibberish dolloped thickly on the game, but if you're a fan you'll wallow gleefully in its manufactorums, power fists, and purity seals, giggling as you shoot a bomb squig and it takes out several more.

This might not be the Space Marine game you were hoping for, but it's still well worth taking a long hard look at.

The game starts with you smashing around as a fully tooled up war-machine.

You've got a jump pack, some amazing armour, and you're dishing out more than 300 points of damage with every swing of your weapon and yank on your trigger.

This early chunk walks you through the simple controls. A bunch of buttons hogs the bottom of the screen and pushing them makes you shoot, move, jump, swing your melee weapon, and use a shield.

After a couple of minutes this walking tank is mysteriously twonked off the screen and the game proper starts. You're a less impressive grunt now, with some basic weapons that do about 15 points' worth of damage with every measly attack.

From here the rebuilding process starts. You're running along reasonably interesting looking gantries and paths, smashing anything that gets in your way.

Once you get to the drop pod at the end of the level you're given a choice of new equipment to buy, and you start tinkering with the make-up of your character. 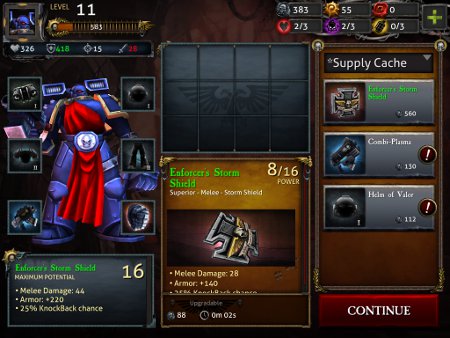 I like it all, but does it come in pink?

There's a variety of equipment slots where you can place your new loot, and you'll get accessories like packs and health-granting wax seals, to bracers, pauldrons, and ridiculously big guns.

Adding something new to your load-out changes the stats for your character, altering the way you play the game in ever-so-slight ways.

You might have been waving a power sword about during the last level, but this time around you're wielding a more cumbersome lightning claw, which means your attack speed is going to be different.

There are huge permutations, and different levels of equipment quality too.

You can forge upgrades as well, giving you even more control over those ever-important numbers. 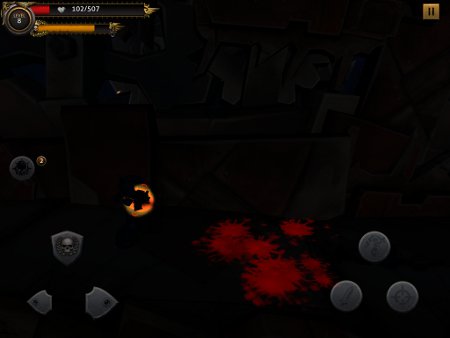 How many Ultramarines does it take to change a lightbulb? Answers in the comments please

The actual core of the game, the side-scrolling violence, becomes a way to figure out whether your new equipment is working as well as you'd like.

And it's good fun taking a new set of tools back to a level you've completed to see if you can do better this time.

A star system unlocks new content as you fight, and there are harder levels that add Halo-style modifiers to play. These include tougher enemies, stronger gravity, and even turning the lights off altogether.

Warhammer 40,000: Carnage is a game that demands some patience.

It can feel a bit of a trudge to start with, but when it opens up, and you find that stat-balancing micromanagement game within, it suddenly becomes something entirely different.

It might not be perfect, and some of the grind does feel too much like an uphill struggle, but there's an engaging game of super-violence and armoury juggling here that shouldn't be ignored.

You might be surprised where the actual meat of the game lies, but Warhammer 40,000: Carnage is a well put together, entertaining diversion
Next Up :
Netflix Desta: The Memories Between review - "Pass the ball and conquer your dreams"

Warhammer 40,000: Carnage has been updated with a new Space Wolf character and some killer drones on iOS and Android

Warhammer 40,000: Carnage has had its price cut for the first time on iOS and Android