War Wings is a slick and entertaining multiplayer dogfighting sim. It's the sort of game you're going to lounge around on your sofa swearing at.

But there's decent balancing here, and enough of a drive to add new bits to your plane that you're going to push through some of the more frustrating moments.

It looks good, it's pretty easy to play, and the action it throws at you walks a decent line between simulation and arcade explosions.

They're on my six

You spend most of the game behind the controls of an aeroplane, as you'd sort of expect. You're weaving through the air, taking out enemy planes in deathmatches.

You've got a joystick to control your movement, and a few buttons that let you shoot things in the plane-face and reload.

If you're under fire yourself, a swipe on the screen will pull off an evasive manoeuvre. There are two other buttons that represent your throttle and your air brakes. 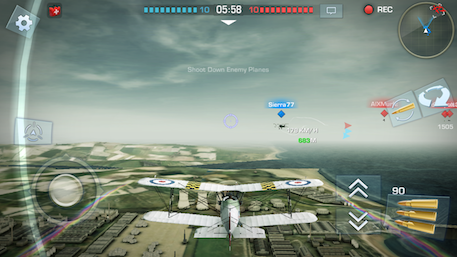 The core of the game is the blasting though, and this is handled pretty well. There are some snazzy camera angles as you chase your foes, peppering them with bullets.

It all adds to the overall slickness of the game. This is a brilliantly well put together shooter that entices you into its game of thick and meaty air-combat and holds you there.

The scraps are tense too. There's no score limit, rather each team gets ten respawn tickets. Once one side has spent all of these, the other is named the victor.

Wings of a dove

And that means that battles can shift cataclysmically if one player gets on a run. But that ebb and flow makes for a white-knuckle experience.

There are currencies to spend and upgrades to unlock for your plane, but they tend not to distract too much from that bullet-riddled heart.

War Wings is definitely up there with the best aviation blasters on the App Store. It's thick, it's fun, and you're going to find yourself ploughing hours into it when you only meant to sit down for a quick go.

The sort of dogfighting game you're going to end up stuck in, in the very best way
Next Up :
Streets of Rage 4 mobile review - "Worth the twenty-seven-year wait"

War Wings tips and tricks - How to master the skies