Texas-based developer Tiger Style says that Waking Mars is a game about gardening, but I think that sells it a little short.

The description conjures up images of green knees, soggy mud, and Alan Titchmarsh, which isn't the greatest PR campaign in the solar system.

No, I think Waking Mars is about science. Because every time you stumble upon a new species of plant life or a new critter in the game's Martian caverns you'll need to experiment and observe to understand what makes it tick.

You've got an encyclopedia, sure, but its digital pages stay blank until you do some good old-fashioned science.

So you'll need to see what happens when you splash a plant with water, or feed it different seeds, or lure an animal into its jaws. You'll need to find out the effects of acid and fire, and see how different organisms mix.

But, most of all, you'll want to find out how each species reproduces. That's because pioneering astrobiologist Liang soon finds out that the only way to delve deeper into the mysterious Lethe cavern is to increase the planet's biodiversity, by making plants and animals reproduce.

So you'll need to find out that Halid Zoa - a green plant with a cannon-like mouth - shoots out seeds when it gets damp. You can use those seeds to grow more plants, or feed them to scuttling crab-like Phyta to make them reproduce.

Every new plant and animal you grow or breed causes the area's biomass to increase. But manually planting seeds and feeding animals will take too long. Instead, it's in your best interests to set up self-sufficient ecosystems that tend to themselves and keep replicating in your stead.

For example, planting a miniature forest of seed-spitting Zoa and then herding a handful of Phyta into your new alien clone factory.

The critters chew on seeds and split into two, and the Zoa keep making new seeds. If you come back in a few minutes you might find a pulsing, jumping, croaking mass of ugly aliens, each boosting the area's biomass by five points.

There are predators to deal with, too, and you'll need to juggle their advantages - they contribute a whole whack of biomass, and can secrete the most valuable seeds - with their disadvantages - they eat your aliens, and they can eat you too.

This makes each area of Mars something of an organic puzzle. How are you going to use your pocketful of seeds, your encyclopedic knowledge of Martian biology, and the available terrain to craft a living, breathing, self-replicating ecosystem that will sufficiently increase the area's biomass?

Because each and every solution is quite personal - there's not a massive glut of different plants and animals, but there's enough variety to make everyone's answer unique - there's a real sense of reward to seeing your plan come together.

I vividly remember holding my iPad with a huge, satisfied grin as a family of floating Cycots dutifully gathered up Zoa seeds, returned to their home base, and used the subsistence to multiply.

The group expanded and expanded, maintaining exponential growth until the screen was swamped by an army of alien lifeforms. It was my own little alien factory.

You forge these gardens by tossing seeds - like slimy green hand grenades - at patches of fertile ground. Your skin-tight spacesuit only has enough pockets for a tiny collection of seeds, so you'll need to keep growing new ones to replenish your supply.

Liang zips about caves with a handy jetpack. This makes him nimble and agile (and effortlessly easy to control by dragging your finger about the screen), letting you intercept seeds, fireballs, and falling stalactites before they sploosh into a lava sea, or crush a Phyta's head in. It's pretty dynamic and fast for a game about gardening.

Boosting biomass is the mechanic for opening up new parts of Mars, but the real mission of the game is to follow a downed robot rover called OCT0. This takes you on a whirlwind tour of the planet's subterranean intestines, accompanied - via radio - by friendly colleague Amani and chatterbox artificial intelligence ART.

Waking Mars doles out some tantalising hints at a bigger, more interesting tale: but it never quite delivers. Neither of the two endings is massively satisfying, given the enormous promise of the game.

But the interaction between characters is well-pitched, and the exploration of Mars is quiet, considered, and contemplative: a welcome respite in a science-fiction video game, which are so often noisy and aggressive. And, at seven hours, Waking Mars is one of the longest games on iOS.

The game has a rather unique visual style: it looks like a collage of glossy NASA photos, all cut up and arranged in wonky, slightly careless ways. This creates a spooky, lonely atmosphere, fit for a distant planet.

And - to top it all off - the music is exceptional, imbuing Waking Mars with a hazy ambient soundtrack that really suits a game about exploration, wonderment, and science. 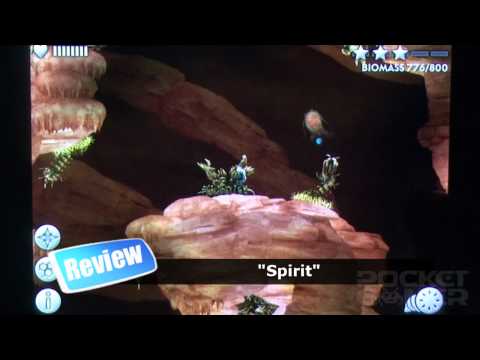 Captivating, elegant, and fiendishly clever, Waking Mars delivers a science-fiction epic that's a delight to explore, and rewarding to play
Next Up :
Hindsight review - "Deeply emotional but a tad repetitive"