The key to an enjoyable racing game is often the skill of the computer-controlled drivers. Too good and they're frustrating, but too bad and they're no challenge. Cruising over the line isn't what we're here for - we want the thrilling, hard-fought dive to the finish.

VS. Racing 2 strikes that balance almost perfectly. Its brief, petrol-burning encounters almost always end with a desperate last-corner overtaking maneouvre that leads either to a famous victory or a horrendous crash.

The game offers a top-down perspective on the world of motor sport, and you can control the whole thing with a single finger. A steering wheel sits in the bottom-right corner of the screen, and you move your finger around it to steer.

If you prefer a more traditional control method, you can switch to tilt or tap in the settings menu. Whichever style you choose, things take a bit of getting used to.

But once it all clicks you'll be powersliding around corners and pulling off ridiculous undertaking moves with the best of them. And for every silly thing you do, and every race you win, you earn coins.

You can spend these on upgrading your vehicle, raising its top speed, making its acceleration quicker, or giving it better off-road handling. There are three vehicles to buy, and you can change their colours or buy other cosmetic changes as in-app purchases.

There's local multiplayer, too, which lets you take on up to five friends over wi-fi, or three over Bluetooth. Here the game chucks in some special Mario Kart-style power-ups that are missing from the single-player mode, like oil slicks and turbo boosts.

There's just something satisfying about ruining a real person's race with a rocket. You can't do the same thing to your AI opponents, but nor will you really want to.

VS. Racing 2 is a polished, incredibly enjoyable high-speed blast. Its bite-sized races mean you can grab a go in less time than it takes to boil an egg, and they always manage to conjure up the sort of crazed, sideways scramble for the line that real-life motor sport can only dream of. 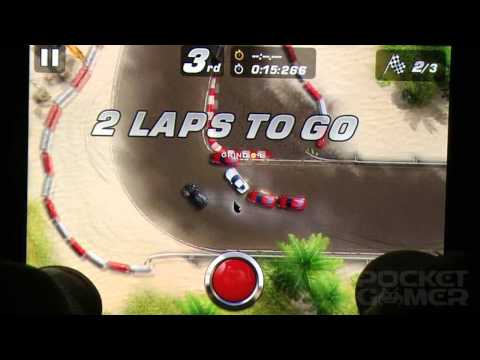 A wonderfully entertaining, perfectly balanced arcade blast, VS. Racing 2 offers the sort of addictive racing everyone can enjoy
Next Up :
Roller Drama review: "Scheme with your team, skate great"

Grab Gold-Award winning arcade racer VS. Racing 2 for absolutely nothing

Trash your competitors and chase ghosts in VS. Racing 2 thanks to latest update