The evolution of Kairosoft's management franchise is fast-paced yet subtle. Each new game feels only slightly different from the last, yet still manages to keep us entertained for hours at a time.

The latest, Venture Towns, follows on from last month's Oh! Edo Towns, taking the very same concept and transplanting it from a Japanese Edo setting to modern society.

While the new theme doesn't add any more excitement over the last setting, it's still a charming and enjoyable experience, with plenty to do, see, and unlock.

Your town starts off small and desolate, with just a handful of citizens and the essentials needed to survive. It doesn't stay that way for long.

As you place buildings and gradually turn your little village into a busy metropolis, the key is to balance the money that your townspeople are earning with how much they're spending.

Each little person will get up, go to work, and then head out and spend the cash that they earn at the various stores and amusements that you provide. It sounds like a simple setup, but in fact this is one of the more challenging Kairosoft titles available.

Each shop and building costs maintenance each month, so rather than simply banging lots of shops down you need to place them in such a way that they'll be used regularly. It's common practice to remove buildings frequently as you come to realise that they aren't being used very much.

You'll also need to have empty lots available at all times in the hope that new people move in - the more people you have, the more money they can spend, so this is essentially the most important element of the game.

As with all of Kairosoft's releases, Venture Towns is a deep game with plenty to unlock and explore.

Citizens can discover new jobs, and perfect each art to the point that you unlock more industries and job titles, with higher rates of pay.

You're also able to research industries yourself, and having a nice variety of these will ensure that you unlock every available nicety going for your villagers.

What you need to watch out for, however, is the positioning of your buildings. People can only walk a set number of tiles before they give up and go home, so if there isn't enough for them to do nearby they'll simply keep their money to themselves, which - as you'll know if you watch the news - is bad for growth.

Venture Towns is easily one of the most rewarding Kairosoft titles going, and watching your town expand - with citizens upgrading their lowly cottages to towering mansions - is an experience far superior to so many other management titles on iOS.

However, Venture Towns is also one of the more confusing Kairosoft titles, and you'll probably end up losing on your first and even second play.

With so much to balance and not enough explanation given as to where the balancing is necessary, it becomes a case of carefully placing down buildings and watching your cash to see what difference it makes. This can lead to your creativity being hindered somewhat.

It's also worth mentioning that Venture Towns is rather similar to Oh! Edo Towns - it's not simply a reskin, but many of the gameplay mechanics and ideas have been reused and it definitely doesn't feel like a brand new title.

For Kairosoft fans, Venture Towns is yet another excuse to get comfortable on the sofa and lose an entire night or three building up your own little empire. 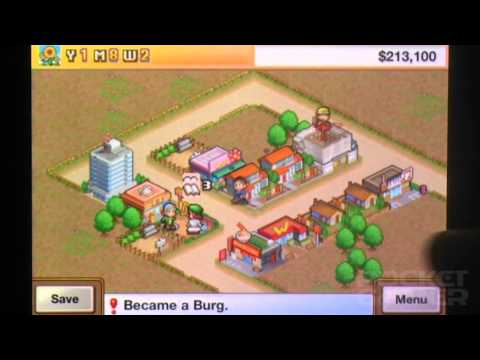 Kairosoft throws out another stonking management title, with Venture Towns satisfying our hunger for creativity, expansion, and depth
Next Up :
Star Discord review - "Needs polish, but it's shaping up to be a true RTS on the go"