Now that Ultimate General: Gettysburg is out on iPad, I feel safe in saying that it's easily the most beautiful rendition of the bloody American Civil War I've seen. It's all soft-focused maps and big-bearded generals.

It's a real-time strategy game envisioned by proven Total War modder DarthMod realized with a small team under Gamelabs.

It has you commanding thousands of troops on either side - the Union or Confederate - with big arrows dragged with your finger to determine the outcome of the Battle of Gettysburg.

There's no micromanagement here. Instead, you need to be concerned with your troops' morale, which is affected by fatigue and courage, among other factors.

Your other big concern is, obviously, their positioning. Points of elevation and cover from artillery fire should be exploited, as well as opportunities for ambushes, or flanking. 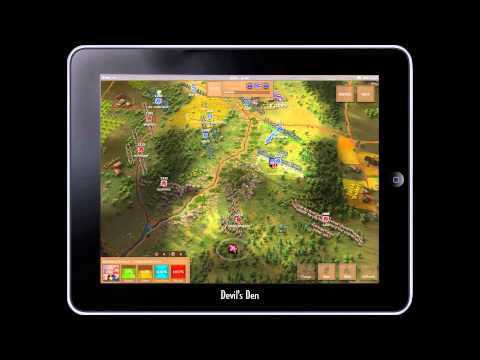 The claim by its creators is that Ultimate General has "the most accurately created map [of Gettysburg], complex morale, innovative control mechanics and smart AI."

Those that are already playing it seem to be agreeing with that notion. If you want to check it out for yourself then it'll cost you £5.99 / $7.99 on the App Store.

Ultimate General: Gettysburg was originally slated for Android tablets as well as iPad, so it should also be on its way there, hopefully.

Check out the gameplay of this stylish strategy game

Check out the epic war scenes in this promo trailer for Ultimate General: Gettysburg