How to be bigger than Lord British in Ultima Forever: Quest for the Avatar - hints, tips, and tricks

Aside from some glaring technical issues, Ultima Forever: Quest for the Avatar is a pretty great RPG, with plenty to see and loads of adventures to go on.

It's a simple but enjoyable role-playing game. Because of its size and scope, however, you'll probably be in need of a big old set of tips to help you along the way.

We're one step ahead of you, chap. That's why we've already assembled this set of foolproof hints and strategies to get your quest off to a great start.

In fact, you might call it the 'Ultima-te' guide. Ahem. Anyone? No? Suit yourself.

Enough of this nonsense. Let's get started. 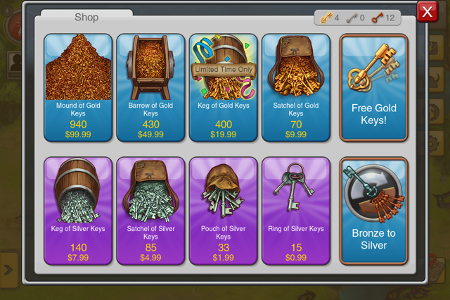 Though the moment-to-moment play of Ultima Forever: Quest for the Avatar is easy enough to grasp, there are some very simple things of which you should always be mindful.

Return to the game every day and you'll receive a present. Could just be some Bronze keys, but they're something for nothing, eh. And if you revisit the game on a number of consecutive days, your prize will be considerably larger.

You can change Bronze keys to Silver keys under the 'Shop' option. Tap 'Bronze to Silver', and many of the lower-value keys will be fashioned into the far more useful Silver ones. You'll want to keep a few Bronze keys handy, though, for you can use them to "Fast Travel" from area to area.

You can use the Silver keys to make progress on the main quests and side-quests. In large towns, you'll also find Unlimited Chests. You can use these as many times as you wish. So, if you've got a couple of Gold and Silver keys going spare and you don't have to make any repairs to your items, consider giving one a visit.

Once you've got this swanky new equipment (and, indeed, whenever you receive new items) in your possession, go check whether or not they're better than your current set of tools. A slightly tougher piece of armour may be the difference between life and death in the dungeons of Britannia. 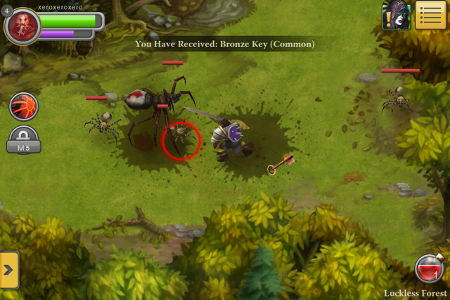 Of course, you should also keep your equipment in good condition. A small red icon will pop up above your head each time an item is in a less-than-ideal condition. So, head into your inventory and tap that 'repair' button as and when.

Once you've done this, it's time to leap back into the fray. To remain fighting fit at all times, you need to grasp the subtle nuances of combat.

You won't automatically defend yourself, so always stay on your toes. If you're rushed by skeletons, your player will stand and take each hit without resisting. The same is true after you've killed a target - fail to select another target, and you'll remain stationary.

Unless you're in an area that's completely out of your league, you can freely engage multiple enemies at once. The Warrior also deals splash damage with his strikes. So, while you're fighting one bad guy, you'll hurt his mates, too.

You should also be on the lookout for opportunities to "Backstab". If you can get behind an enemy and strike him, you'll cause a vastly increased amount of damage per hit. Enemies with ranged weapons are particularly susceptible to this, as they try to put distance between you and them, turning their whole body away from you to flee.

A few words now on bosses. Though you can't make it through the big encounters completely unscathed, there will always be a way to minimise the amount of damage you'll take in these special scraps.

Take Giles the Unlucky, by way of example. While you're trading blows with this undead creep, he'll gradually chip away at your health. As soon as he retreats to the safety of his tower and begins shooting attacks at you, though, you're pretty helpless. It's at this point that you'll need to keep circling him - easily avoiding his powerful ranged attacks - until he returns to tackle you head on.

Work out the patterns of each boss, and you're laughing. 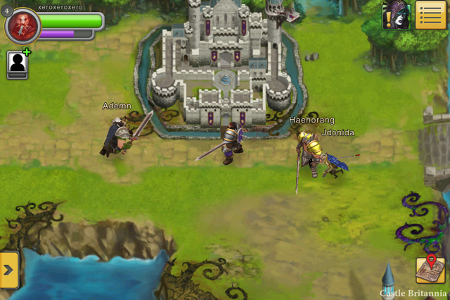 You have health vials, and you should always use these instead of getting knocked out entirely by unexpected attacks or boss encounters. Wait until your health bar drops into the red zone, then tap the potion for a shot of life with maximum effect.

You should run dungeons multiple times to gain extra items and experience. And while you're running them, try to spot any walls that look out of place. Occasionally, you'll spot a secret area hidden behind a sealed door or a crumbling wall, you see.

Knowing where you should be heading next can be tricky at times. Your main quest is indicated by a 'U' symbol on the map, so you do have a general idea of where you ought to be. Everything else is secondary, but you should try to complete side-quests if that means making the main quest easier.

While you're searching for where to go next, speak to everyone you meet. Not only do these folk fill in details for you about the world, but they will also often ask you to share your opinion on something. Whatever your verdict, you'll earn bonus Virtue and Reputation for sharing it. So, yes, seek them out whenever you can.

Next Up :
What does Bane of Arthropods do in Minecraft?

Free to play RPG Ultima Forever: Quest for the Avatar will be shut down on August 29th

Ultima Forever: Quest for the Avatar

Hands-on with Ultima Forever: Quest for the Avatar

Trailer for EA and BioWare's MMORPG Ultima Forever: Quest for the Avatar

EA's Ultima Forever: Quest for the Avatar heading to iOS this spring