UFHO2 has some niggling problems that mean the number at the end of this review isn't as high as it maybe could have been.

It's an occasionally fiddly little game, with some annoying unskippable cut-scenes that bob up every time you retry a failed level.

But underneath the annoyance and the frustrating bumps there's a good game wriggling to escape.

Load it up in multiplayer and there's a crackle that's absent from the single-player campaigns, and even on your own some levels and new ideas shine that much brighter than others.

It's just a shame they're shadowed from time to time by some features that don't quite fit so cohesively into the whole. 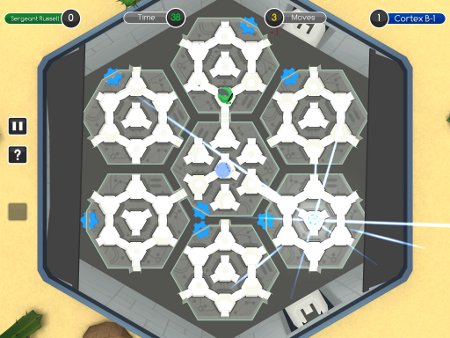 It's sort of like a top-down version of Downfall, but with gems

The game is all about the apparently errant H in its title. It stands for 'hexagon'. These shapes make up the bowels of the ships you're flying around in, and you need to twist them to create paths for your alien.

There are gems and power-ups to collect in turn-based strategic walk-offs. You tap on rooms to twist them, and tap on the cogs to twist sections, which are bundles of rooms with limited exits.

Moving from hexagon to hexagon, which you do by dragging your character, costs one point, and so does twisting them to realign their exits.

Twisting a section costs double that, but there are power-ups that play around with costs and what actions actually do.

When you've used up all of your points your opponent gets a chance to take their turn.

Once you or your opponent has snaffled a set number of gems it's game over. If you've won you move on to the next challenge. If you've lost you have to tap through the same dialogue again to restart the level.

It's a problem that could easily be sidestepped with a 'restart' button in the pause menu, but no such luxury exists. In a game where it's pretty easy to make silly mistakes, that's a major oversight. 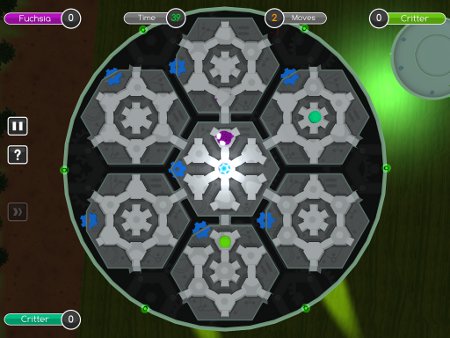 I reckon I might be able to bag that one

UFHO2 has its moments, and when you're skipping through the levels, or playing against a friend, it's an entertaining and smart mash-up of puzzler and boardgame.

But then it bumbles for a while and you forget how much fun you were having. With a few tweaks here and there it could be essential - as it stands it's a few sides short of its full potential.

There are certainly a lot of plus points here, but UFHO2 fumbles its execution a little too often to earn a higher grade
Next Up :
REDMAGIC 8 Pro review - "A beast in performance, but not without growing pains"

Multiplayer strategic boardgame UFHO2 should surface on iPad this week

So much strategy it could melt your brain