Thankfully, first impressions of TwinGo! are positive. For a start, there’s nary a cute animal protagonist or physics-based challenge in sight.

Instead, TwinGo! starts out with an elegantly simple core concept and gradually builds it out into something downright devious.

A Song of Ice and Fire

You take control of Fuyu and Natsu - a pair of elemental sprites with a penchant for rolling. Using a beautifully minimalist swipe control scheme, it’s your job to guide the duo around a series of floating mazes and plonk them on the appropriately coloured teleports at the end of a level.

There’s a catch, though: Fuyu and Natsu move in tandem with every swipe, meaning you need to pay close attention to them both at all times. Accidentally nudge one off the side of the play area and it’s an instant restart - success depends on using conveniently placed objects to shunt them around and reach your goal.

At first, it’s all about easing you into that core conceit of dual movement, but soon TwinGo! ramps up the challenge, tossing in new obstacles to complicate matters considerably.

For instance, certain tiles crumble after a single use, turning pathways into instant dead ends; you can shift crates together to form immovable barricades; and later power-ups can either freeze our heroes in place or turn them into gap-jumping fireballs.

Dual in the Crown

It’s deftly designed, with a nicely judged difficulty curve spanning the game’s 90+ stages, and its bite-sized brain teasing is perfect fodder for gaming on the go. Also, the practically compulsory three-star scoring mechanism adds ample replay value for completists out there.

While it’s hard to get too excited about yet another cheery puzzler landing on the App Store, TwinGo! proves that a spot of creativity and first-rate implementation still goes a long way in an overcrowded genre.

It’s a bright, breezy, and supremely playable puzzler that’s simple enough to hook you in and smart enough to keep you coming back for more. 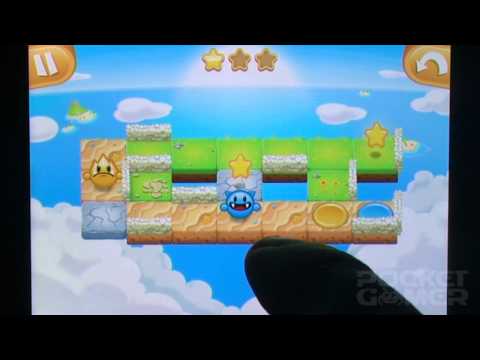 A smartly designed, surprisingly taxing puzzler that makes the most of its elegantly simple core
Next Up :
Star Discord review - "Needs polish, but it's shaping up to be a true RTS on the go"