The original Trenches was a generally well-received strategy game – at the time of writing, it currently sits on a Quality Index score of 7.9, with most complaints levelled at its brevity.

There’s a degree of anticipation for its sequel, then. But while its longevity issues have been fixed, a few inexplicable adjustments make this game significantly worse than its predecessor.

For starters, there’s the tutorial, a quite gobsmackingly inadequate introduction that fails to explain a game element before hastily failing to explain the next. Learn the ropes

Trenches II then decides it’s bored of explaining itself, and proceeds to gloss over a host of important mechanics in a series of glib text boxes that entirely fail to cover what is fairly crucial information.

Unfortunately, the code seems as flimsy as the tutorial, prone as it is to booting you back to your iPhone or iPad’s menu screen. When you’re towards the end of a particularly laborious later level – and boy are there a few of those – having to start again is knuckle-chewingly frustrating.

It still offers the same side-on tower-defence mechanics as the original game, but here they’ve been expanded to account for more unit types and three different campaigns. War is hell

While it makes for a more substantial game, it exacerbates the repetition of its core ideas, even if in theory the additions (cavalry troops, spies) should add variety.

In fact, the latter seem to unbalance the game in your favour. With your opponents unable to see spies – they remain cloaked as they advance - it’s all too easy, if a little cowardly, to march your squad into rival territory and then shoot your enemies in the back.

In addition, levels are far longer than they need to be. Stretching on for several screens, their size seems to be nothing more than a way to extend the lifespan, adding no meaningful strategy to the experience.

The thin red line This becomes increasingly obvious as the game progresses, the stages filling with more cover and obstacles (including landmines, which naturally need to be avoided). Surprisingly, given the title, the one feature it doesn't seem to pile on is extra trenches.

However, branching routes through the three campaigns are a welcome new feature and a better way of adding replay value than the cheaper, more artificial methods detailed above.

It’s a pity that the effort expended here – and in the game’s solid presentation - wasn’t put into better balancing its systems, or on the multiplayer modes, which seem like a token addition. Non-line

Perhaps because people are fed up with the flaws outlined above we struggled to get an online game, the game’s matchmaking regularly timing out when we attempted to connect.

Finally, there are the dreaded in-app purchases, here allowing you to pay for various perks to improve your army. More egregiously, you get some free for joining EA’s online service, Origin.

In isolation, this wouldn’t necessarily be a bad thing, but in light of the game’s excessively lengthy and tedious later stages, it feels like you’re being cajoled into spending.

While its predecessor was a breezy if fleeting treat, Trenches II demonstrates that the ‘bigger, harder, more’ approach isn’t always a good idea. Bloated and unbalanced, it’s one of the most disappointing sequels we’ve played all year. 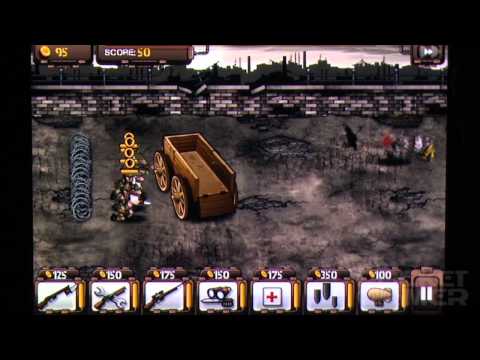 A misjudged sequel that mistakes quantity for quality
Next Up :
Crux: The Great Outdoors review - "Looks can be deceiving'"