A party of three enters into a mysterious dungeon and must find their way out. This sounds pretty standard until you realise that every room in Total Party Kill requires at least one of the adventurers to meet their end. It's a puzzle platformer where you must use the bodies of your fallen comrades to solve puzzles. 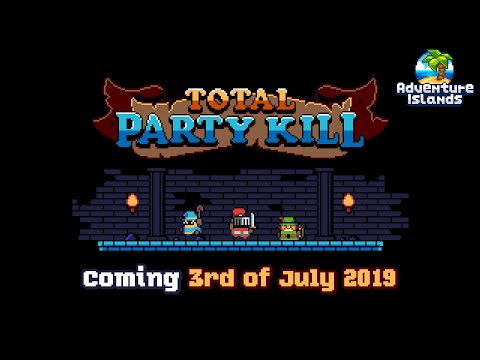 Many of us have played games where we've had a teammate who simply isn't pulling their weight when it comes to task at hands, some of us might even have left them to die in order to make a dash for the exit. Well, making good use of your teammates is core to the Total Party Kill experience. Although, you'll be controlling all three of them.

Each of the party members, Knight, Ranger and Mage, have a different ability which can be used with their comrade in order to clear your way through levels. The knight can smash a person through the air and over a great distance, the ranger can shoot an arrow which pins a colleague to a wall, and the mage can freeze an ally into a block of ice which can be used as a platform. Presumably they all killed the bard well before reaching the dungeon.

It's all presented in the blocky, retro style that Adventure Islands Games seem to have consistently managed to pull off with their previous titles.

The inception of the idea came as part of the recent Ludum Dare 43 Game Jam. The jam's theme was 'Sacrifices must be made' and that was definitely taken to heart in the design of Total Party Kill. It actually came in first place in both the Theme and Overall categories of judging.

Total Party Kill will release for free on Android and iOS on the 3rd of July, with 60 levels to complete. You can currently pre-order it on iOS.

Interested in finding out more about upcoming games? We've got a whole section for them.
Next Up :
Summoners War: Sky Arena announces epic collab with Cookie Run: Kingdom beginning August 28th