The trouble with physics is that they can be unpredictable.

This can be a good thing, particularly for the purposes of amusement: it’s why Stair Dismount is still so popular after all this time.

But when they play a key role in a puzzle game – a genre traditionally reliant on precision and reliability – things can go horribly awry.

Evidently, most people are happy to forgive a game like Angry Birds for its physics-related foibles, but even that can polarise opinion – it’s perhaps not as widely hated as it is loved, but it definitely has the capacity to infuriate.

While it’s difficult to see anyone getting quite so annoyed with Torture Bunny – apart from completists aiming for the best possible score and wondering why their well-crafted attempts yield inconsistent results – it’s frustrating to play a game where seemingly identical solutions result in very different outcomes.

It should come as no real surprise to learn that the object of the game is to torture a bunny, though he’s more a sentient crash test dummy with a rabbit’s head than a cute, fluffy mammal. Each stage gives you a limited number of items with which to reach a set number of torture points.

There are three figures in all, each represented by a number of carrots - you only need one to unlock the next level, but you’ll need 15 in total from each set of nine to unlock the ‘boss’ stage at the end.

Here the rabbit is armoured and your role is to first de-frock him and then earn extra points for the subsequent harm you inflict.

The objects you’re given range from spiked wheels to swinging axes, via circling swarms of bats, poison arrows, and cauldrons.

Most can be flipped with a quick tap to face in the opposite direction, and as long as no two devices are touching they can be placed anywhere within the level. It’s a bit odd to see a bed of nails floating in mid-air, but you soon get used to it.

Unfortunately, it takes longer to grow accustomed to the idiosyncratic physics.

Part of the problem lies with the rabbit himself, who moves around in the cage at the top. Tap the ‘go’ button to release him when he’s a pixel farther over to the right than usual and you can find yourself with a score of around a third of your previous attempt – or, by contrast, one three times higher.

On one occasion I happened across a colossal tally purely by accident after inadvertently setting the same trap in motion that had earned me a pitiful 100 points on the previous attempt.

An element of luck is part and parcel of most puzzle games, but rarely has it played so important a role as it does here.

Aside from the trial-and-error nature of each dungeon, Torture Bunny isn’t a particularly pleasant game to play. The slapstick appeal of Stair Dismount is one thing, but the poor rabbit’s screams of agony are quite troubling.

Designing these intricate labyrinths of pain may appeal to the puzzle-solving side of your brain, but if you’re the kind of person who gets squeamish at flushing a spider down the plughole then you’re advised to steer well clear. 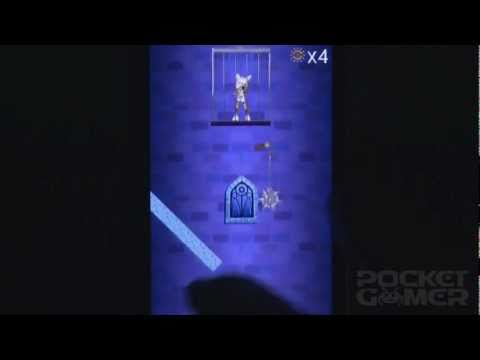 By turns sadistic and capricious, this twisted puzzler has its moments, but leaves a nasty aftertaste
Next Up :
Otaku's Adventure mobile review - "A truly bizarre love triangle"