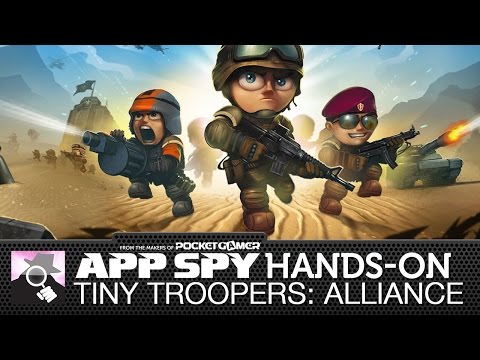 Tiny Troopers: Alliance is a midcore strategy title set in the military shooter's universe. You build a base, fortify it, dig up resources, and then go and invade your neighbours to blow up their stuff.

If you've played Clash of Clans then you'll get the idea straight away. It's a slick looking production, mixing slightly cartoon visuals with well put together menus and lots of neat animations.

You'd be hard pressed to call it the most original game in the world, but I've only really scratched the surface, so it might reveal itself more with extra play.

We're submitting it to our seven day free to play review process, and the first entry should be up within the next couple of days. In the meantime why not check out our hands-on video above to get an idea of what to expect.

If you'd rather just jump in at the deep end, you can grab Tiny Troopers: Alliance right now from the App Store for nothing.

Tiny Troops: Alliance is a Clash of Clans a-like that's heading to iPhone and iPad soon