The key to creating an addictive endless-runner appears to be mixing simplicity and variety. You take a simple playing style, controlled with as few gestures or taps as possible, and layer that on top of a world that's different each time your players set out.

Time Surfer is a prime example of the formula done right. Its blend of psychedelia, cartoon graphics, and single tap play make for a heady and addictive cocktail. It might just be Tiny Wings wearing acid-trip pants, but it's got enough tricks up its space-age sleeve that you won't care.

The game is all about out-running the end of time - or, to be more precise, out-surfing the end of time. You play as a plucky space explorer equipped only with some sort of intergalactic space-surfing board, and it's up to you to stay a couple of seconds ahead of the fiery death of all things.

Each play-through is essentially a series of undulating platforms. You tap on the right-hand side of the screen to squat down and pick up speed on the down sides of these undulations, and then release it to spring forth the up sides. There are obstacles to miss, boosts to grab, and deaths to avoid.

Of course, you won't be able to avoid death forever, and you'll end up either plunging off the space ramps or getting caught in the glowing wall of pain that haunts your every leap. Not to worry, though, because the game offers two options at your timely demise.

You can either start your run again or use gems you've collected to rewind time a little and try the part of the level that killed you without making the same silly mistake. It's a clever system that lets you correct your errors, and makes your actual death seem that much fairer.

There are challenges to complete, and when you do you'll move up the ranks, unlocking different pets that you can use to give you a boost during play. These cost slices of cake, which are hard to come by in the game, but easy to purchase with real money in the store.

Time Surfer is a brief and wonderful slice of fast-paced, brightly coloured fun. It takes a template and builds on it, dropping in its own style and swagger, and leaving you with a wide, faraway grin on your space battered face. 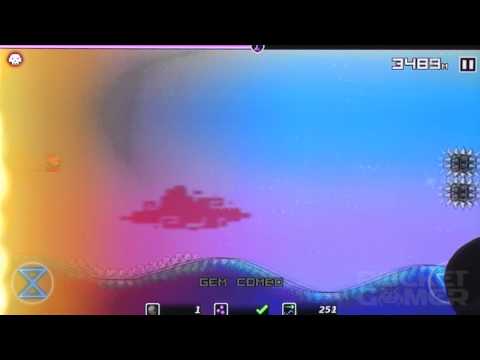 It might not be the most original idea out there, but Time Surfer is executed with such aplomb that that really doesn't matter
Next Up :
Jade Order review - "An puzzling path of the warrior"