Two giants of EA gaming past and present will be heading to iOS later this year, the company has told Pocket Gamer - the classic Amiga / PC / console management title Theme Park and the next portable iteration of DICE’s Battlefield series.

Not too many details have been revealed about the contents of this mobile version of Battlefield 3 just yet, but given the previous release (Battlefield Bad Company 2) was set alongside the events of the home console version, we expect the action in this title to follow a similar path - setting the game in an earthquake-hit Iraq, rather than with Sweetwater and co.

But despite our love for shooting terrorists in the face (virtually, I mean), it’s the appearance of Theme Park that has the office running around like lunatics, eating chips with unhealthy levels of salt, and making motions to shake each other’s hand in a dark room before suddenly pulling away at the last minute.

They’re from the game, in case you were wondering / worried. 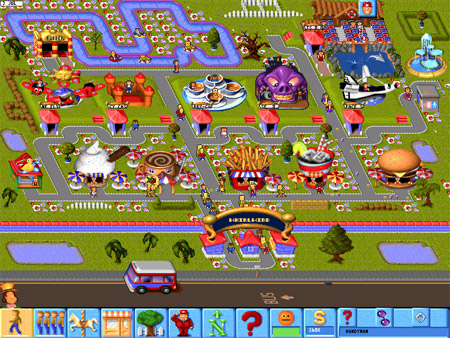 One of Bullfrog’s finest creations, Theme Park tasks you with running various amusement parks across the world. You'll have to pull in punters with fun and exciting rides, make sure they’re kept happy with a decent level of staff, and extract as much cash from their sweaty palms as you can.

It’s widely regarded as one of the best management games ever made, thanks to its cheery disposition and engaging gameplay, so we’re very much looking forward to seeing it on iOS.

Both games are likely to be demonstrated next week at Gamescom, so we’ll have more concrete information for you then.

PC version of Theme Park pictured above.
Next Up :
SIEGE: Apocalypse is KIXEYE's new 1v1 military battler that's out now on iOS and Android

Is freemium bad for game design or just misunderstood?

Hands-on with Theme Park for iPhone and iPad