It's late on a weeknight - you're tired, part of you wants to go home and change out of the clothes you've been wearing since 7am, but something keeps you sitting around the gaming table.

That "something" is the story your friend is telling behind his DM's screen. You know you should go home, since there's work in the morning, but the story's just too good to walk away from.

This is the same sort of atmosphere that The Shadow Sun creates, and it's a wonderful thing.

A labour of love by and for gamers, The Shadow Sun replicates a tabletop RPG experience almost perfectly - right down to the carefully crafted fantasy world in which it's set.

After picking your stats, abilities, and rough appearance (emphasis on rough), you're thrown into the middle of a story involving a longstanding feud between two kingdoms, a charismatic religious zealot, and a nasty plague that turns its victims into zombies.

The conspiracy at the heart of the story is ultimately what drives the plot along, but where The Shadow Sun really shines is in its ability to give you input into how the story advances.

Many plot points are unavoidable, but how you get to them - and react to them - is entirely up to you and your playing style. 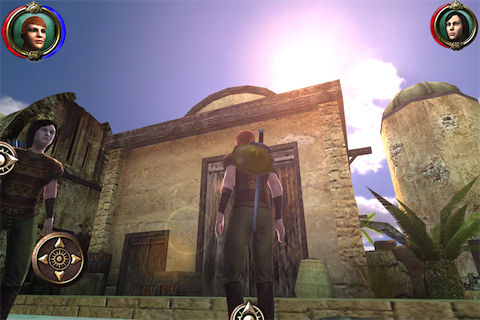 Early on, for example, you're tasked with breaking into a prison, and you can choose to either skulk through the sewers or track down a pair of guards, mug them, and take their uniforms.

You'll wind up in the prison either way (unless things go really pear-shaped), but there's an immense feeling of satisfaction in knowing that you determined how your character got there.

Like most tabletop RPGs, The Shadow Sun doesn't skimp on combat and action. So when negotiation and charisma checks fail, you'll draw your weapons, ready spells, and launch into a real-time, third-person combat system.

Attacks are handled through a single button that you can also hold down to block incoming blows. Outside of this button, there's also a pair of customisable menu bars for spells, abilities, and readied items.

Despite the primary one-button interface, combat's never a dull affair. I found myself routinely rotating the camera around in battles marking sure I wasn't overlooking a hidden foe and, full disclosure, looking for a super-cool hero angle from which I could best appreciate the action.

The UI during combat never interferes with your view of the action, and the icons are just the right size to let you know that your abilities were handy without being too obtrusive.

If there's a problem with The Shadow Sun's combat system, it's the inability to disengage from battles and run when you're overmatched or unprepared. For such a generously open RPG, this feels like a bit of an oversight.

There are a few other complaints about The Shadow Sun that die-hard dice-chuckers might raise. For instance, despite the freedom to customise your stats, job abilities, and weapon proficiencies, your character is ultimately shoehorned into a traditional mage / rogue / fighter triad.

Also, despite the Unity-powered graphics, the character models are downright polygonal and create the sense that you're playing a high-fantasy version of GoldenEye 64.

But these are minor complaints, and they won't detract from your enjoyment of The Shadow Sun, a smartphone game that has echoes of Skyrim and your favorite tabletop experiences when it hits its stride.

It's easy to lose yourself in the rich world, immersive lore, and forest of side-quests of The Shadow Sun
Next Up :
Hero Emblems II review - "Lovely visuals and music, but match-3 combat lacks strategic depth"

The Shadow Sun, the Silver Award-winning epic RPG, is out right now on Android