The Room Three - Another gloomy masterwork 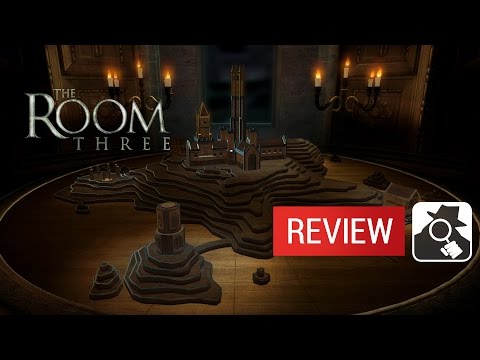 Subscribe to Pocket Gamer on
Okay, tell me the truth, where have you been?

I've been on a train, in a library, in a wood-working room, and on more than one occasion I've somehow managed to fit inside tiny models thanks to a weird eyeglass that someone called The Craftsman gave me.

Er, have you been licking toads again?

Of course I have. But I'm actually talking about The Room Three, the latest instalment in the point, press, pull, and twist adventure series from Fireproof Games.

Yes it does. Anyway, the game continues the story started in the first two games, and adds a few new tricks and twists along the way to keep things reasonably fresh. The core remains the same though.

And, for the uninitiated, what does that core involve?

It involves prodding boxes. Puzzle boxes. Each chapter of the game is a puzzle with multiple parts that you need to solve. There are switches to pull, things to slide into place, and all manner of other contraptions to contend with.

Other contraptions? So it's not all boxes?

No. The Room Three widens the scope of the original. There are still boxes, but the puzzles are spread out across multiple rooms now. You might need to ignite a furnace to melt some gold, or change the path of an underground stream to start a water wheel turning.

Does it add anything else new?

There are a couple of additions. Some puzzles require you to manipulate items with more than one finger, holding things down while you move others around. Then there's the new eyeglass which lets you transport into impossibly small places.

Does the new stuff gel well?

In some cases, yes. The multi-layered puzzles are brilliantly put together, full of strings of eureka moments and sudden realisations. But switching between rooms does reveal the frailty of the control system a little too often, and there's a bit of slightly frustrating back-tracking here and there.

I thought The Room was all about the controls

Oh it is, and when you're focused in on a puzzle, manipulating things with taps and swipes, they're still pretty much perfect. In fact if anything they're an improvement on what came before. It's the wandering around that's not quite as satisfying.

I guess that's the problem with the added scope

Exactly. It's a small problem, and it by no means detracts from the overall experience. This is a game stuffed full of atmosphere and style. It drips with creepy spectacle. From the first bars of the opening theme to the shudder of noise when you complete a task, everything is designed to unsettle.

Yeah. The Room Three is a wonderful continuation of one of the finest series available on mobile. It's so uniquely tactile, so unlike anything else, that it can be forgiven a few missteps. This is another gloomy masterwork, packed with incredible puzzles. Just go and buy it.

The Room Three - Another gloomy masterwork

While some of the new additions aren't perfect, The Room Three is still a brilliant, uniquely tactile experience
Next Up :
Jade Order review - "An puzzling path of the warrior"

Fireproof Games' The Room Three drops its price on Android