The original Oregon Trail is one of those educational games of the '70s that made a long-lasting impression on those who played it.

Not only was it excessively unfair and hard (in keeping with the plight of pioneers travelling to the west coast of America), but it also introduced a whole generation of children to the word ‘dysentery’, usually in the sentence, ‘I can’t believe they all died from dysentery again’.

This new freemium spin-off from Gameloft has about as much in common with the original game as a cow has to a buffalo, so those expecting a quick trip down memory lane (before being drowned in a river) are advised to seek out the similarly titled The Oregon Trail instead.

As far as the freemium game trail goes, American Settler does quite a lot right, but it eventually succumbs to illness.

The game starts by effectively showing you what a fully-built town would look like - filled with thriving shops, penned farmyard creatures, and special characters that cost an absolute bomb to buy - before promptly dumping you on a tiny patch of barren land.

From here, your task is to build up a settlement worth calling home - chopping down trees for lumber, building houses for workers, and establishing businesses for cold, hard cash.

Surprisingly for the genre, you can actually do quite a lot of actions at once thanks to a generous energy system. Most actions cost one energy point to perform, but harvest times are suspiciously short and bonus energy plentiful, meaning the first few hours will have you tapping with abandon.

Characters will pop up with missions as you progress (the usual stuff - ‘build this building’, ‘farm x number of potatoes’) to give much-needed structure to proceedings, and again these tend to be far more plentiful than other examples in the genre, leading to a game that moves forward at quite some pace and with purpose.

Where the skies are blue

American Settler has more in common with The Sims Social on Facebook than FarmVille in this regard. Both games look great, with well-animated cartoon graphics bringing the little town to life, and both managed to suck in even this grizzled old gamer in with their speed.

But, unlike Sims Social, American Settler simply runs out of things for you to do too quickly.

After the first few hours, you’re most likely going to be simply working towards one task at a time - a task that inevitably requires you to plant crops and wait a few hours before harvesting - with no real emotional context for these actions.

The fixed perspective progressively gets more annoying as your town expands, too, with accidental taps (and therefore wasted energy) increasingly more common. You can move buildings around to new positions freely, but this isn’t the most elegant solution, and it doesn’t help when you’re trying to hunt an errant bear for food.

It is peaceful there

The most annoying aspect of American Settler, though, is ironically the concessions made to give the game more of a link to past glories.

Random events such as tornadoes and bandit attacks pop up almost every time you log on, with the outcome being the destruction of crops or resetting of businesses - almost inevitably ones that you’ve waited days to harvest. You can pay ‘bucks’ towards avoiding these disasters, but they’re expensive for what they do.

Then there’s the social network the game uses - Gameloft Live. While it’s fine in terms of functionality and has plenty of options for spamming your Facebook wall, the fact that you can’t use other more popular friends’ lists is a blow for the social side of the game.

Much like the journeys undertaken by the families migrating west, The Oregon Trail: American Settler starts off well, with plentiful supplies and a good pace.

But because it takes the less-well travelled road of Gameloft Live, by the time the missions freeze up there’s not much left to do other than finally look up what dysentery is on Wikipedia. 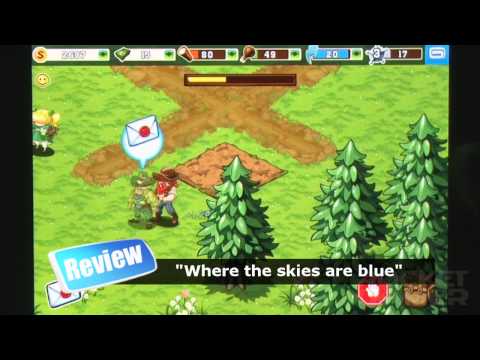 A well-constructed social freemium game, but one that becomes more awkward and less appealing as the game progresses
Next Up :
Otaku's Adventure mobile review - "A truly bizarre love triangle"