Universal's The Mummy wasn't really the blockbuster smash everyone was hoping for, but Night School Studios might have a remedy for the disappointment.

The developers of Oxenfree teamed up with Universal to create The Mummy Dark Universe Stories, a narrative adventure game reminiscent of Telltale's The Walking Dead.

Does Night School use their writing prowess to save The Mummy reboot from itself? Read on, dear reader.

Dark Universe Stories picks up after The Mummy film ends, with our star, Nick, returning to Egypt with Vail to find the Book of Set in a last ditch effort to rid himself of Set's powers.

Nick was willingly possessed by Set to save the world, but now's he's grown a bit sick of sharing his body with the god of chaos. 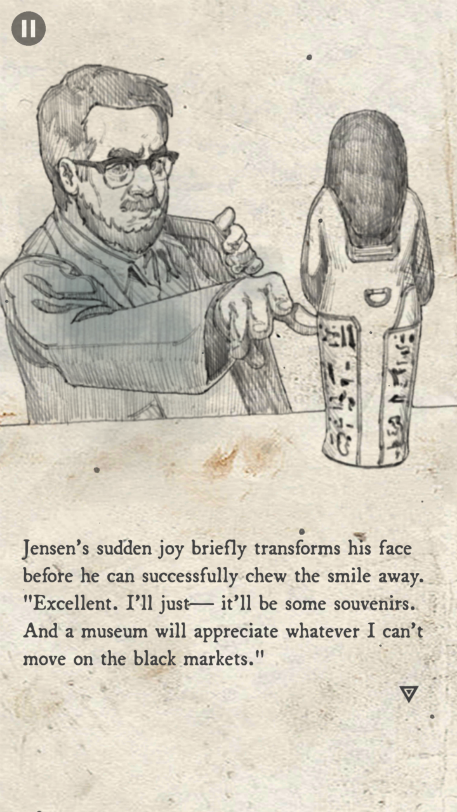 What follows is standard fare for text-based adventures. Players are thrown into the world, making decisions at regular intervals that will have an important impact on the story, though the true effects of your actions might not be seen immediately.

All of that exposition is paired with atmospheric comic book art that brings The Mummy's fantastical world to life.

The game frequently switches between well-written character banter to more overarching exposition written out on old-timey parchment to keep the player interested in the game.

The frequent changes between narration and character interaction keeps what is a rather text-heavy game from feeling like a slog.

Of course, you can't explore a dark tomb full of magical artifacts without running into a puzzle or three, and Dark Universe Stories does deliver on that front.

Exploring crumbling dungeons and poking at sarcophagi, you may need to take a break from all of that reading to search for clues, or find a way to open a door. 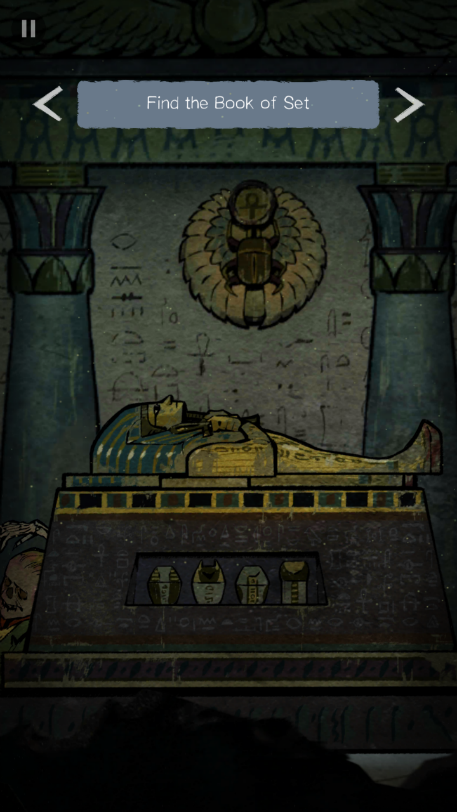 Nick's powers, on loan from Set, make for some unique puzzles that add flavor to the story, especially since Nick is trying to keep his stowaway a secret from other folks eager to uncover ancient Egyptian mysteries. If you do an especially good job of navigating interactions with other characters and seeking out clues, you may win achievements. Each chapter in the game has around three, which gives the game a nice scavenger hunt-esque vibe.

If you want to move through the admittedly short chapters (this reviewer got through them in 15 minutes each) more quickly, you'll need to pony up 99p for one ticket, or £14.99 for a season pass, although bundles are available.

That's a bit of a bummer, especially because the story's been split up into twelve chapters, with more to follow.

If you're a fan of The Mummy universe, though, Dark Universe Stories may very well be a worthy investment of your time and money.

The writing is witty and the dialogue well-realised. It's nothing groundbreaking, but the production is great, and short chapter lengths mean you can consume the story in breezy bites.

Night School Studios' top of the line writing takes steps to save what was an imperfect movie in this fine narrative-driven adventure
Next Up :
Happy Game review: "Don't worry, be happy?"