There was much excitement amongst mobile gamers when DeNA unveiled mobile FPS The Drowning last October.

Having pitched itself as the game that would revolutionise shooters on touchscreens, The Drowning received mixed reviews at launch and somewhat stumbled out of the gate.

While it would be unfair to suggest it hasn't amassed an interested audience, the game has struggled with player retention, soon turning to in-game events to keep players engaged.

We caught up recently with former Scattered Entertainment's Ben Cousins in New York to talk about how The Drowning has performed and what DeNA has in store for the FPS next.

Pocket Gamer: Though highly anticipated, The Drowning arguably hasn't performed as well as hoped. What went wrong? Did the 17+ rating from Apple hurt its chances? Ben Cousins: I would contest the idea that in terms of audience appeal that it wasn't a success.

Comparing apples to apples, I've done free-to-play shooters on other platforms and in 2009 we launched Battlefield Heroes on PC and that took three months to get two million downloads. The Drowning did that in two weeks.

There were three real experiments with The Drowning that we explored. One, is there an audience for free-to-play shooters on mobile? Absolutely.


The second was, can you create a control system that appeals to people who don't like virtual sticks?

When we looked at the split between virtual sticks and gesture controls, the majority of people chose gesture controls - so we definitely feel like we took a step in the right direction addressing the control issues in mobile.

People that were entirely accepting of an energy mechanic in another genre of game were annoyed when you presented them with that exact same mechanic in a shooter. This probably had the biggest affect on the game's retention.

In the future, we probably won’t use the mobile-style game loop.

Was DeNA's press campaign for The Drowning too broad, aiming at big sites outside of the traditional mobile news and review sites?

The broad reach of The Drowning's PR campaign was a strategic move.

After the game's global launch we did a survey of the people who downloaded and played The Drowning, and the vast majority of them are core, console gamers.

The third thing was, can you take a casual gameplay monetisation loop and apply that to a core shooter? And I think the answer there is no.
So, I believe that it's a bit of a misnomer that the mobile market is made up of a different set of people.

There's a subset of the mobile market made up of core gamers who also play mobile games, and that's the audience who was most excited about The Drowning - and those people find out about games from traditional sites.

There's definitely a case for repeating the kind of PR campaign that we ran for The Drowning with future titles.

Why do you think the gaming press reacted so negatively to The Drowning? Do you think any of this was tied to you personally - you've been rather outspoken about your belief about mobile supplanting consoles.

Probably, but it doesn’t bother me. I hate the idea of writers feeling that they need to hold back.

I'm on my tenth free-to-play title now, and I've become aware of the fact that when you do something new that not everyone is going to be behind you.

If people want to take opportunities to critique that angle, I'm fine with that because at the end of the day the great thing about free-to-play is that consumers can download and try the game for free.

There isn't a gatekeeper now in the industry, so you can't have your game rubbished in the same way.

So there's no such thing as bad publicity?

I believe that's much more true in the free-to-play business than in the packaged goods business.

Someone might see a poor review of a free-to-play game but be interested in it, and so they'll download it. That just wouldn't happen if there was a pay wall in place.

Do you feel that The Drowning's three month soft launch gave you an adequate test of the in-game economy?

It was focused on retention over monetisation, but there's an interesting data point there.

What this told us is that there really isn't much of a difference between how gamers behave in The Philippines or in Germany.

It’s been said that The Drowning hasn't really found an audience, is there anything DeNA can do to re-engage players?

It found a bigger audience than we expected and we're quite happy with the audience that we have now.

We're in the process of submitting a build to Apple that has the final, major gameplay updates in it. This build contains two new modes that we're adding: a stealth-based game mode and an action-based game mode.

After that, we'll continue to run things like the boss hunt events.

You mentioned the energy mechanic being a problem earlier. Do you think the monetisation model for The Drowning is broken or can it be fixed?

The casual-style or mobile-style game loop metamechanics - outside of the gameplay - weren't as successful as they could have been.

We didn't know this because no one's ever tried this before, so I wouldn't call it a failure because it's a failure compared to what? There was nothing else like it.

But we've learned that that kind of monetisation and game loop kind of jars with the gameplay - particularly the energy system.

These were the same consumers who were fine with the energy system in other games but when you combine core shooter-style gameplay with an energy system, it jars them. I don't know why, but the customer's always right so I won't argue with them. 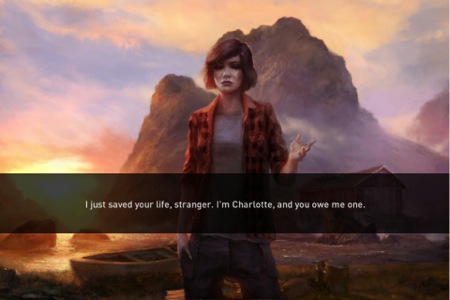 I also don't know about that affecting monetisation, however, as I think it affected retention more than anything.

Monetisation for The Drowning is well within the normal metrics for a mobile game, we're probably monetising at the same level as Candy Crush Saga per user in terms of ARPDAU (average revenue per daily active user).

Do you think it's possible for a FPS to succeed on mobile without relying on a controller?

The controls have nothing to do with the difficulties we had with retention in The Drowning; those elements have been a success.

We've seen an uptake on the gesture controls that proved that we filled a gap that suits the people who don't like virtual sticks.

Future games will support hardware controllers - the standard from Apple - and gesture based controls in additional to virtual stick controls. And if none of those options work for you, I don't really know what I'm supposed to do.

Do you have a breakdown on what percentage of users were using gesture controls over virtual joystick?

I believe that it was about 60 percent of players used gesture-based controls.

This is pretty amazing, because we give them that choice pretty early in the game when they'll have had about 15 seconds of playing with gesture controls and more than half are choosing that over virtual sticks.

Interestingly enough, the average score that gamers got was higher than the scores they were getting with gesture controls but we see a significant portion of the very high scoring players using gesture controls which tells me that we're probably doing the right thing.

What the most important lesson that your future projects learn from The Drowning?

With that in mind a 700 megabyte download that wasn't compatible with the iPhone 3GS, iPod touch 4, or iPad 1 doing a million downloads a week is pretty significant.

We hope more people will be bolstered up by this success in terms of generating interest and downloads, and we hope to see more products like The Drowning in the future.